With news in the UK featuring little else in the wake of the sad passing of HM Queen Elizabeth II, my mind turned to the 70 years that have passed since she ascended to the throne in 1952. It has been widely reported how, as a young Princess in WW2, she trained as an ambulance driver and mechanic. A picture of her astride a motorbike has even been widely circulated.

With all the focus on Great Britain over the last couple of weeks I began to ponder about British Motorcycles that have prominent or even iconic over her reign. It has spanned both the hey-day and the decline to near obliteration of our bike industry by the mid 1970’s.

In recent times we have enjoyed a resurgence in our bike industry: Great names such as Triumph and Norton have re-entered the market place.  Latterly even such grandees as Royal Enfield and BSA have come back to prominence, albeit with bikes built in India and under their ownership, however lets get back to 1952

Starting our journey through seventy years in the 1950’s to just as the Late Queen was crowned it was the Vincent Black Shadow that was the pre-eminent British Bike. The muscular, potent 1000cc V twin was arguably the first ‘Superbike’ with near 150mph performance. This was decades before the term was even coined 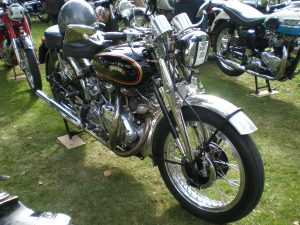 However the Vincent didn’t have the world to itself, other Brits were also becoming iconic and remain so to this day. Notably the BSA Goldstar and the series of race bred bikes from the Norton stable: The Manx Nortons. Both were famous for their exploits on a certain small island in the middle of the Irish Sea. They were both fast, light, nimble and oh so good looking machines. 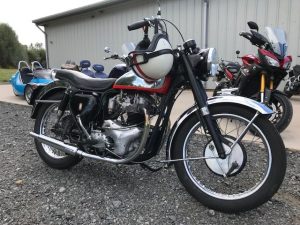 BSA was pretty tasty too

In the 1950’s and 60’s the British bike industry was ‘king of the hill’. A plethora of manufactures were selling thousands of bikes annually. The likes of  Velocette, Matchless, Greaves, Royal Enfield,  James, Ariel and Panther in addition to the more famous brands of Triumph, Norton, BSA etc

As we moved into the 1960’s we hit an era of booming sales in the USA. Back in the UK itself the notorious cafe-racers and Mods v Rockers battles came to prominence.  Actual pitch battles broke out between slickly dressed scooter riding Mods and Rockers in leathers riding brutish Brit bikes. The papers were full of wild headlines as the two groups fought it out for cultural supremacy.

From this era it is perhaps the Triumph Bonneville that is the definitive British bike of the decade. A 650 parallel twin, designed by the legendary Edward Turner. This cool, quick and good handling bike could be bought ‘On the Knock’ for a relatively affordable price. The BSA Bantam probably sold in bigger numbers, but had its roots in a DKW and is related to a MZ, so that discounts that! 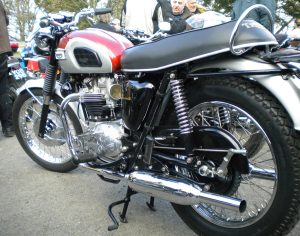 The Genesis of the Custom Scene

The 1960’s also saw the emergence of the custom and modified bike as riders did a whole host things with bikes and frames. The Cafe-Racer was often a more humble machine made to look and sound more sporting with a fruity exhaust, drop bars and a single exhaust. The engine from one bike would wide up in the frame of another to give the best combination of performance and handling. This was the birth of the iconic Triton’s for example. Here a Triumph twin engine was fitted to the frame from a Norton, often the famous ‘Featherbed’ noted for its sublime cornering prowess. The ‘Cafe-Racer’ craze has sprung back to prominence in recent years too with a host of factory retro bike and modern custom shops offering bikes very much in this spirit.

Into the 1970’s: It wasn’t just about Flares and The Osmonds You Know!

However, by the end of the 1960’s the storm clouds were gathering and the first signs of decline crept in. Rather like the British Empire bits starts to fall by the wayside

The rise of the cheap, oil tight, reliable Japanese bikes had begun to eat into that global dominance and the 1969 Honda CB750K really blew Brit bikes into the weeds! As we entered the 1970’s a series of mergers and takeovers had left us with a lumbering behemoth of NVT (Norton, Villiers, Triumph). Attempts to counter the Japanese invasion floundered or failed for the most part: The highly promising 350cc twins like the Triumph Bandit and BSA Fury never even made it to the market.

Against this gloomy backdrop one British bike continued to do well, for a while at least. The Norton 750 (and later 850) Commando. A really great looking bike that took the fight to the CB750 and later Kawasaki Z1. It sold well across many markets and even secured MCN Bike of the Year on a number of occasions 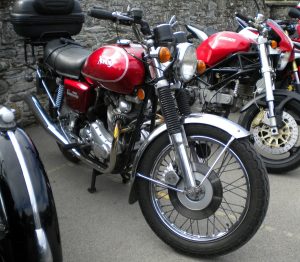 The Collapse Could Not be Averted

But the ascendancy of the Japanese bikes was tide that could not be turned back. By the middle of the decade it was hard for the British bike industry. Much like the car industry a combination of dire management and a disgruntled workforce meant our once world leading position was but a distant memory. As we entered the 1980’s the likes of Norton and BSA were gone. Royal Enfield now an outpost in India, Triumph about to close the doors at Meriden. But just then a knight in shining armour came to the rescue: Alexander Femor-Hesketh, 3rd baron Hesketh to give him his full and rather glorious title.

He had come to fame by taking on the might of Ferrari and Team-Lotus in ultra competitive world of F1. His independent team headed by jet set, playboy driver James Hunt. The leap into F1 ultimately was a bridge too far for them, but he turned his eye to the motorbike market and produced a beautiful V Twin 1000 cc superbike, very much in the spirit of the Vincent Black Shadow 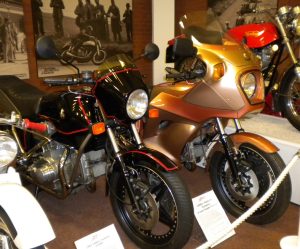 Launched into a media frenzy before it was fully developed. the V1000 was a stunning machined. However it soon faded from prominence as gearbox maladies emerged.  Development and sales trickled on to as late 2010 under the stewardship of Mick Broom.

You Spin me Right Round!

Perhaps the more significant bike of the 1980’s was the Norton Rotary. A development of the Wankel engine that could trace its roots bike to the ill-fated NVT set-up. The Norton brand had remerged by the 1980’s and put a series of rotary powered bikes into limited production, The Classic, Commander, Interpol and the superbike, race bred F1 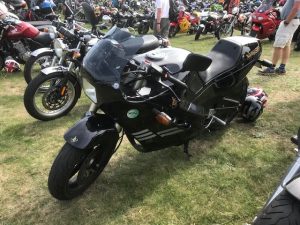 The rotary Interpol was a popular choice with UK Police in the mid 1980’s; even my Dad got pulled by a representative of the plod riding an example! But it was the beautiful F1 that grabbed the headlines. The race bike it sired doing well in the British Superbike series. Even better, it won races on the spiritual racing home of Norton, the IoM until well into the 1990’s. Check out the ‘Race of Aces 1989’ from Snetterton and you will see what I mean: The JPS liveried Nortons crushed the best Japan could then offer on the track

However the real big news as the 90’s dawned was the re-emergence of Triumph. Almost from nowhere, backed by a home building magnet John Bloor, the brand re-launched with a range of 3 and 4 cylinder superbikes. The Daytona, Trident and Trophy. These modern designs could go toe to toe with the very latest bikes on the market. All were very successful throughout the 1990s Into the noughties now and we are sticking with Triumph: Namely  the Speed and Street Triples. Two beefy no-nonsense bikes. Stripped back race replicas, shorn of their fairings, these were arguably amongst the first of the ‘factory fighters’. The bug-eyed headlamps and a fly screen combined with an upright, but still aggressive riding posture. These bikes continue to evolve right to the present day Yet again for the next decade it is Triumph that comes up with the goods: The Bonneville is in fact the British bike of 2010’s. In its various forms the ‘Bonne’  has sold by the thousands all over the world. It has evolved into the definitive retro-roadster, that while it might be styled after its 60’s forbear it is technically bang up to date. 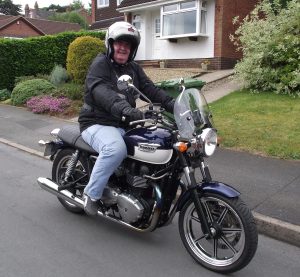 The Triumph operation continues to flourish to this day. While much of the production comes from abroad design and development is still very much here in Britain. Backing the Bonneville up the 800 and 1200 triple Tiger range have always done extremely well in the marketplace. 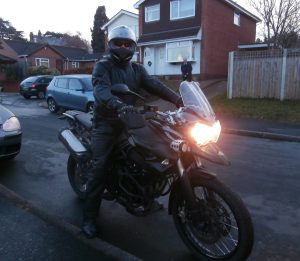 To top that off fantastically the company has produced the rapier like 675 Daytona and hilariously over the top 2.3 litre Rocket 3. This demonstrates the breath of capabilities of the re-born company.  They  even supplies engines for the Moto 2 GP series these days!

So as we move into the 20’s and the end of the period covering our late Queen’s reign, how are things looking? Well Norton are back in Birmingham after a troubled period that ended in financial scandal. The Commando 951 is back in production and the beautiful and now properly engineered V4 is looming. Under Indian ownership, but very much still a British icon, just like Jaguar Land-Rover.

Then there is CCM, an old family firm thriving making some really cool bikes such as the Spitfire: Based around a daring, stylish and minimalist single cylinder engine and a sparse frame. The same basic package has been spun out into a highly popular series of cool specials. All of which have quickly sold out. 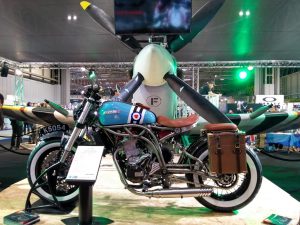 Royal Enfield Interceptors, developed in part her in the UK are selling like the proverbial hot-cakes. Even the Indian made BSA Goldstar has gone on the market. Neither are the original machines, both like the Bonneville are now thoroughly modern machines. OK both are Indian built, but the British heritage is plain to see

So there you have it, a brief look at the British bike over the last seventy years.

Pass me the keys to the Norton V4 and nobody mention the Ariel 3 or Triumph Tina! 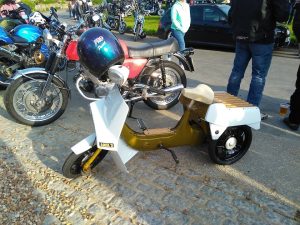 Ariel 3 – Not our Finest Hour!

The Norton JPS at the 89 Race of Aces:

Triumph Motorcycles – Factory Tour – If They are Cool Enough for McQueen….