So is a Small Bike Really Cheaper to Run?

I had hoped to present to you a comprehensive ‘Owners Guide’ to the advantages and pitfalls of owning a small bike over a large bike. Theory says the small bike will win hands down in the financials and at first my research looked likely to confirm this.

But in the end, when it comes to unloved and worthless motorcycles, you do not get what you pay for . That’s right, it’s often possible to shell out under £1000 to get a brilliant big bike. However the same sum won’t necessarily buy a brilliant little bike! But let’s ignore the purchase costs and focus on the running costs.

You Can’t Beat a Healthy Debate!

I’m sure this will generate, as Mrs Merton would say,  a healthy debate: Let’s have a look at a few running costs owners face to start with and quickly conclude we can’t simply define running costs of a big bike v a small bike:

As I’ve experienced running a big old BMW R1100RT and I also own a little Suzuki RG125  let’s compare running these two bikes: In the UK, you just have to look at the annual payment for road tax and you’ll see: Small bikes avoid the big fees of big bikes. If you’re a youngster there’s a huge difference between insuring a small cc bike over a 1000cc bike. Right there are two running costs that’ll swing the pendulum towards little bikes. The MOT costs are the same: Take your little bike in for the annual test and you don’t get a discount so there’s no difference there. 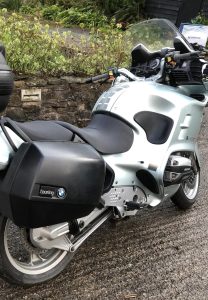 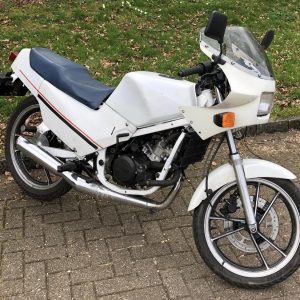 How About the Bits Then?

Spares next: How about these then? Oh yes, the smaller the parts , the cheaper they are? Indeed that’s the case in many cases. Look at the price of the tiny battery for the RG v the big battery for the BMW. But look at what you get with the big bike;  not only does it have an electric operated screen fairing but a massive starter motor that starts the bike without the need to huff and puff on the kick start. So although you are paying less for that battery, you’re getting less out of it. Same with that big back tyre: You’re paying more but you’re getting more grip, more rubber on the tarmac and you’re paying for more safety.

Chains and sprocket prices: The big bike wins in this instance as the BMW is shaft drive so that’s one advantage. It’s a key element in the ‘big bike v little bike debate’. Big bike parts are expensive but, generally, they don’t require replacement so often

What if it is Made of Pure Unobtainium?

You recall we said small parts are cheap ? That’s true if you can find the parts and the small bike is popular like a Honda ‘Step-thru), but a when it comes something a tad more niche such as my Suzuki RG125 Gamma Mk1? Ouch, tiny tyres cost hell of a lot more than standard wheels so good luck with a “budget” tyre search. That seat lock release is a bit expensive too and that little radiator might not be a cheap find. Neither will the CDI or power valve

As for the forks and brake parts: They are the same as a big bike. Ever had a pair of forks reground?  The price is the same no matter what diameter or length they are so expect to shell out. So it’s not clear cut, you do not always get value for money with small parts.

Going from the Ground Up?

But Then Factor in the Big Miles

50,000 miles on a BMW? Yes sure that’s not too much of a stretch is it ? But on a RG125 now that would be a much bigger challenge. It’s easier to change the parts in the small bike but  you really would need to get used to changing them more often. The little bike isn’t designed for big miles. You might actually end up replacing at least a dozen tyres, bearings and chains on your little bike while the BMW has only had a couple of oil changes. You can add the cost in pounds and pence but you’ll need to factor in the “down time” if you use a little RG125 too often.

Easier to Work on a Bigger Machine?

Working on the BMW, in theory it’s big so should be easy but getting behind all that fairing isn’t so simple. You need to factor in dismantling time on big bikes, especially four carburettors v a single carburettor on a small bike. But don’t think all little bikes are built for taking apart. Whilst you’ll have a nightmare replacing the clutch on a BMW, once it’s done it’s done . Tiny bikes have tiny parts, tiny screws and can be very frustrating to remove simple bits – anyone who’s taken the fuel tank off a rg125 complete with its combined 2 stroke oil tank and frame mounted fuel tap will agree . Tiny bikes need tweaking ALOT so be prepared to tweak !

Fuel economy? Interesting, because at 40mph I’ll bet that little bike does great returns on a gallon but when you start to wack open the throttle and head onto the dual carriageway it’ll be the BMW that’s hardly at a stretch and giving great returns I’m sure? Over the life time , when compared mile v mile I bet the economy isn’t much different.

So that’s just a taster in the big bike v little bike running cost argument: A comparison that’s really very unclear ! Might just be why 600cc bikes are so popular in our group? Is that the sweet spot of budget biking? Perhaps you run a Yamaha Diversion and a moped to compare or possibly a Honda Pan European and a Lexmoto you’d like to compare running costs. If you do, why not share your conclusions with us perhaps?

Words and Pictures: Adrian Budd of the ‘Unloved and Worthless Facebook Group’

Adrian is an expert on the underbelly of motorcycling, seeking out the bikes that others ignore and dismiss, his excellent and interesting FB group is well worth checking out.