Getting Out and About – The Miles are Building

Despite the best efforts of a certain global pandemic and its aftermath I have managed to keep building the miles on my RS. I acquired the beast just after the C19 storm hit in 2020. As a result many trips I had originally planned were cancelled; Ireland, IoM, Scotland and Europe all fell by the wayside. 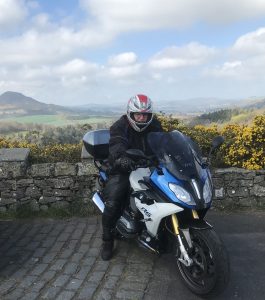 My RS at Melrose View in southern Scotland.

As the swirling mists of the pandemic have slowly cleared and restrictions lifted I have managed a few trips on the old crate. Wales, the Cotswolds, the South-West, Scotland, the IoM and the Peak District all receiving visits.

So have my favourable impressions of the how the bike rides continued as the mikes covered clicked past 13,000? 7,000 of these  have been in my ownership.  Fundamentally yes. However there are caveats and will come to those.

Let’s get the good bits done first! The RS remains surprisingly swift, assured and capable bike to tour on-board briskly. This is achieved in a good level of comfort too. The riding position whilst not bolt upright, is sufficient that pressure on the neck is much less than a full on sports bike. 200 miles + a day on my creaking 57 year old frame are easily achieved with minimal recourse to paracetmol! 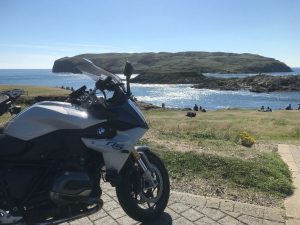 I had to swap out the Michelin tyres before heading for Scotland. I went for Metzeler as replacements. This was on the very scientific basis they were the only ones I could get hold of in time for my impending four day trip to Braveheart Land.  The Michelins still had some life in them, but not enough for the 1000 miles in four days that were looming up.

The Metzelers seem fine to me: I am not a good enough rider to give a definitive judgement, but the bike was secure in bends and turned in crisply when asked. If push comes to shove I would say I prefer them to the Michelins. However I do think the bike rides with a tad more harshness over broken surfaces. Which is way too many of them if you ride in the UK! In the Peak District some of the surfaces are pretty shocking. 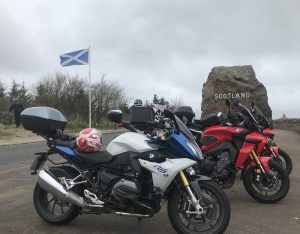 I packed all my gear easily enough for the longer trips: My four day jaunt to Scotland, a week on the IoM for the Manx Classic TT and a two night trip down to the South west. However I still think the top box could be bigger.

The dash layout still irritates me, the speedo should be a rev-counter and the digital bit is too small and busy to read easily. I would be interested to try a 1250 with its flash colour TV for a dash!

The downside to this BMW

So I have been some cracking places and the bike has ridden admirably. All positive then. Not quite. On getting back from a run into Wales I noted oil splattered all over the fork leg and front tyre. A fork seal had blown big time. I couldn’t safely ride the bike. So for the second time in my ownership the bike got dragged off to the BMW dealers in the back of a van.

After a bit of to and fro with the dealers it turned out the fork stanchion was marked and that had taken the seal out. They said it was impact damage and not covered by the warranty. I argued the finish should be able to withstand a bit of road debris. But no, apparently not. Several hundred pounds and a new fork leg later I got the bike back. I was not a happy bunny.

Next up was the 12,000 miles service and the new tyres I mentioned earlier. I had it done at the excellent and attentive BMW Cotswold. I could work from their comfortable customer waiting area whilst taking copious advantage of the free biscuits and tea. They are not really free as the bill for the service and tyres was not small. I could have got the tyres cheaper, but they had stock and it’s important to keep the service book stamped to maintain resale so they say. Still pretty salty to take in one hit though

One last gripe is the finish on the centre stand, which has gone a bit west. I had to rub it down and repaint with black Smoothrite in situ. It just gives the impression that Euro Cents have been pinched here and there in a way that might surprise the unwary.

So overall the RS remains a really superb bike to ride, but seems a little prone to quality niggles. I still love it and look forward to more adventures to come.

Some of the Outings: