Don’t get me wrong I think that my current bike, a 2016 BMW R1200RS SE Sport (pause for breath….) is a fabulous bike to ride: Fast, very comfortable and secure when punted through a bend with a little enthusiasm. It’s a bike that exudes a certain confidence. The quiet man that doesn’t over react or shout latest. Rather it is cool, calm and capable. So what’s the problem with it? In a word, weight: Not so much when being ridden, but when you are the bike and trying move it about in the garage or parking up somewhere. It feels like a proper chunky old thing and I feel the need for something easier to move about on the horizon. Time to have a look at some my options when the time comes

So when an old friend of mine popped in on his 2015 BMW F800GT I jumped at the chance. The GT boasts many of the attributes of my RS: Low seat height, comfort, no chain drive (belt in this instance), hard luggage and heated grips etc. The list goes on for sometime. However while the F800 is only 7kg lighter on paper it feels significantly more manageable in reality. As soon as I got on the GT I was comfortable. I felt at home quickly as all the controls fell naturally to hand. The seat on this particular bike has been sculpted out and is even lower than standard. Oddly I found it almost too low! This is a rare feeling for me! 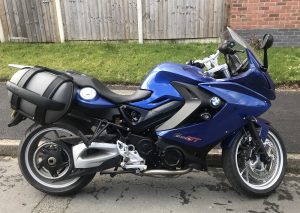 The BMW F800GT. Understated, but not unattractive

The GT is propelled by a willing 90bhp parallel twin engine. It revs cleanly and with no obvious peaks or troughs in the delivery. I rode it on some country lanes that are local to where I live. Very soon I was covering the ground pleasingly briskly. The linear nature of the power delivery and quiet exhaust means that is perhaps a tad lacking in character. Also it did feel  lacking in the grunt department. The F800 suffers when compared to my 1200, having to be worked harder for a given level of performance than I have become accustomed to. But it was no hardship as I found the bike good fun to ride. 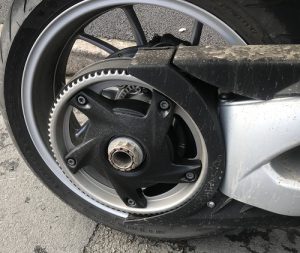 The gear change is crisp and certainly better than the somewhat clunky affair on RS box. The brakes are well matched to the level of go on offer and I can’t say that I noticed them much, which is a compliment. Handling was assured too and the F800 could be jollied along at a decent lick with the minimum of fuss and great level of enjoyment.

My friend tells me this example is excellent on fuel , I have heard this from other F800 owners too. So when you consider that the bike is fitted with hard luggage and all the kit you truly need  it would make a logical, easier to handle replacement for my current ride when the time comes.

Neatly Finished, it’s one to consider

The BMW is well finished too and I have not heard as many horror stories about these as I have the R1200 range. In summary I came away impressed, but not blown away. It is a really capable bike and willing bike. There is nothing wrong with that and there isn’t much wrong with this excellent bike.

Olle Viktorsson (Sweden):
I owned a BMW F 800ST -07 2012-2016 and did 60.000 km on it including Sweden’s Scandinavian neighbours, riding two-up to Tuscany and alone to Georgia and back to Sweden.
2021 I bought a BMW R 1200RS -16 and have covered 18.000 km on it so far including two-up to Croatia.
I also recommend both bikes even though I think the RS is my best bike ever. A joy to ride and the comfort is slightly better than on the ST. The RS have much better suspension (no ESA), the fork on the ST feels cheap. The RS uses roughly 10% more fuel than the ST.
Power is a difference but my ST never felt underpowered.
Going on gravel I prefer the ST, less weight at least 25 kg according to bike Magazines and also less weight at the front that is appreciated on gravel.
I would never trade my RS for an ST/GT. The RS is prime my ST was not
Clive Armitage (Germany):
Fair enough, but…..“The linear nature of the power delivery and quiet exhaust means that is perhaps a tad lacking in character. Also it did feel lacking in the grunt department. “
I moved from a Fazer 600, to a Triumph TT600 to a F800S (with ST handlebars and full hard luggage), and I prefer the exhaust note of the BMW twin (bbbrrrraaaaaappppp) to that of a 4 cylinder (rrrrrrrrrhhhheeeeeee!) – it’s an very individual view, I suppose. The power delivery is better for me, not worse, because it is linear. Torque to spare, relaxed engine (not revvingthe pants off it or having to dance around the gearbox) and a great Sports Tourer.
Exhaust can be changed, but ok. I did once get stopped by another F800 rider at a junction in town because my exhaust note had a different sound to his bike.
Relating a 800cc twin motorcycle’s “grunt” to a 1200cc seems nonsensical (it has less, shock horror).
But, the gearbox on mine is shocking (1, N, 2, 3, 4, N, 5, N, 6 – although I’m going to try a different engine oil next season), and forks were built to a budget and need progressive springs.
Good to read someone talking about the F800 family
Dan Jackson (UK):
I have put well over 50k on an ST and it has been a great tourer, the stator has been the only breakdown and replaced on route by myself so never recovered. The only thing lacking for me is a little soul. The engine is built to mimic the feel of the flat twin and it achieves this but with a higher frequency of vibration. I also found the flat twins lack an engaging power delivery, but that’s what makes them such good tourers, smooth linear power. Dull but good.
Olle, Clive and Dan are all members of the F800 Facebook group and their comments were originally posted there. Reproduced with the author’s permission

Other Options I have considered: