I actually wondered over to Ducati Worcester to take a look at a 950 Multistrada as potential replacement for my BMW R1200RS. However the big ‘Strada wasn’t what I was looking for, but as I went to leave the dainty and pretty Supersport caught my eye. Like spotting a good looking lass at the youth club disco back in the day! So I booked a demonstrator ride. I wish it had been that easy at the youth club disco! 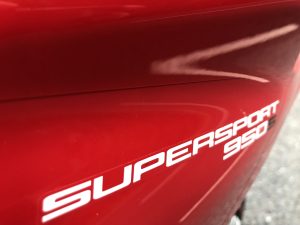 But that is a whole different story; back to the Supersport: The first thing to strike you is that the Supersport is such a good looking piece of kit. So many bikes now are fussy and over detailed . Not this one, clean, simple and confident styling has resulted in a stunning bike. Links to its harder hitting Panigale cousins are very obvious and the bike is all the better for that. 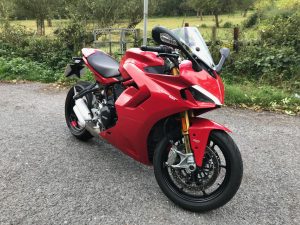 The Supersport is what I would call a ‘real-world’ bike: Powerful enough to be really quick by any sane measure. 110bhp and 69LB-ft of torque from the Euro 5 compliant L twin is plenty to propel the bike at speeds that a local magistrate would be very interested in!

That performance is backed up by fantastic handling and brakes. My 70 mile test ride took me from the outskirts of Worcester on to the charming capital of the Herefordshire Downs;  Bromyard. A lovely, open single track A road that cuts through some quintessentially English countryside. The surface is reasonably smooth and pot hole free. The light, powerful Ducati was in its element. The fact I felt so confident with it right out of the box says a lot about the capability of the bike.

You could argue it lacks that lunatic edge of the tier one machines. But they come at a considerable cost premium and if you truly access their capability on the road you are getting to get nicked at best. The twin is as charismatic as ever in this application. The sound and feel is something you either get or not. Some people like the feel and punch of this layout. some prefer the smoother delivery of a higher revving four. I have owned a couple of Ducati and love the way they attack your senses. Although my demo bike was on sweet sounding stock pipes, a set of ‘Termis’ would be really welcome to fully unleash  the beast as it were!

Tech that makes a palpable difference

On my outboard leg I left the bike in ‘TOURING’ mode and this will probably be fine most of the time. Throttle response was good and it all felt very intuitive. However on the way back I switched to ‘SPORT’ and the bike just came alive. Response to throttle inputs seemed more immediate and the performance stronger. I don’t know if it actually goes any quicker, but the bike just felt faster and more fun. There is also an ‘URBAN’ mode but I must admit to not trying that one! I did like how you could change mode on the move and how easy it was to do so. I had a MV a few years ago. That was so fiddly to switch modes and traction control settings that I rarely bothered.

You could see which mode was engaged on the refreshingly simple and clear TFT display. Big, fat round rev counter and a digital speed readout dominated proceedings. There was also a prominent gear indicator in the centre of the rev counter. Spot on for me. 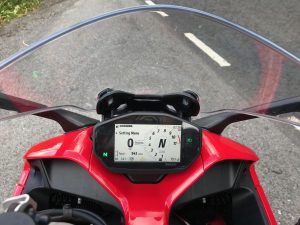 So it’s good looking, swift, sure footed and reasonably comfy. But what didn’t I like? Not much really. Key one for me was the quick-shifter, which worked on both up and down shifts. I have been riding for 40 years and just can’t help myself dipping the clutch lever on up-shifts. On a couple of occasions this seemed to confuse the software managing such things. The result was two or three jerky gear-changes. I am sure that if I rode the Supersport more I would tune into this and the issue would melt away.  All the other tech that is expected these days is in place too:  Adjustable cornering ABS, lean-angle-sensitive traction control and wheelie control. None of which I became conscious of during my ride

The Ducati is £14,500 all bar the shouting which I think is good value for such a capable bike. This is a really excellent machine. If you’re looking for a well rounded real world bike, with dashing modern looks and a characterful engine, look no further. I am going to give my BMW another couple of years, but when the time comes to change the 950S could be what I plumb for