Four Seasons in One Day

The Facebook group has been running for years now having emerged from a couple of old style internet forums everyone used to be members of. However unlike the forums the FB group has rarely got together. So we decided to put this right and arrange something.

An event was posted on the group and twenty-five folks said they were coming along. Thunderbirds are go!

As the day drew nearer the weather, which had been pretty good worsened. Temperatures plummeted and much of the proceeding week was wet and miserable. But what the hell; let’ see who turns up!

I Was Not Alone!

I rolled up at The Food Stop Cafe and initially thought I was the first one to arrive, but I wasn’t sure who was actually coming, so I didn’t know that for sure. In the end five other  lads arrived on bikes and two lads and a lass arrived on trikes. I must admit That hadn’t expected to see trikes, but it’s all good and interesting stuff. I particularly liked the one based on a Austin Maestro 1.6 Auto of all things! It even had MG wheels! Very cool 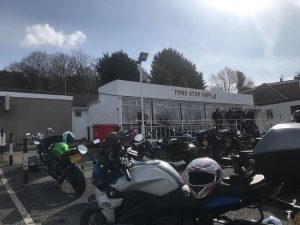 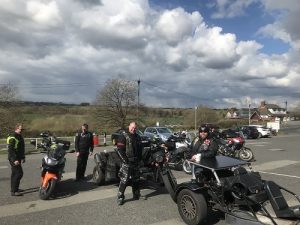 The solo bikes were good mix, my old mate and former Thundercat owner Paul rocked up on his spangly new BMW F800X. There lots other people also called Paul on the ride too oddly. I am terrible with names so it suited me! The other bikes were a Honda CB500X, a Thundercat, and a brace of Honda Rebels, one an 1100 the other a 500. 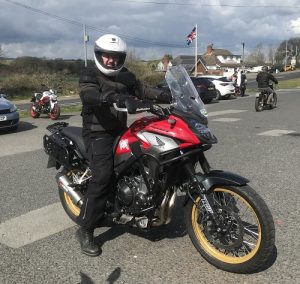 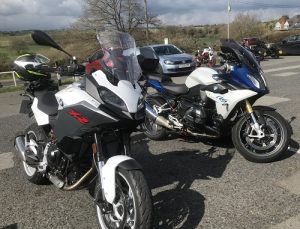 Shining new BMW and my old wreck spoiling the shot

As we set off from the cafe we caused a bit of confusion on the A442: It wouldn’t be a group ride out without a sprinkle of chaos and confusion. But we quickly sorted things out and got underway. I decided to take the group of one of ‘my’ standard loops and headed off towards Bridgnorth, but headed off on the A448 before we got to the town itself. From there we quickly turned on to the fantastic, but challenging B4364 towards Ludlow heading for Clee Hill, a local beauty spit that boasts some of the best vistas that you will see anywhere.

This road combines twists, turns, bends, dips, rises and straights whilst picking its way through some truly beautiful country side. The pace was relatively gentle as people had not ridden together before and I didn’t want the trikes to get dropped; it’s a group ride out after all. We formed up for a few photos on route too before getting off the bikes once at Clee Hill. Despite the weather being a little iffy; it was very chilly and we had even had flurries of snow at one point! That completed the set as we had rain, sunshine and now snow! The view from the hill was spectacular as always. 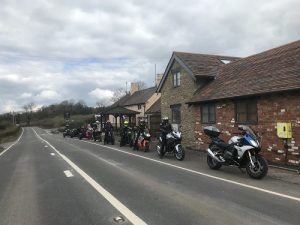 All the Bikes and Trikes On Route

What was as pleasing as our surroundings was how well the group seemed to be getting on. Well that’s biking for you: People who were strangers an hour before now chatting away and sharing banter and memories of a cracking ride so far. This is as much part of the joy of motorcycling as the riding and bikes themselves in many ways. 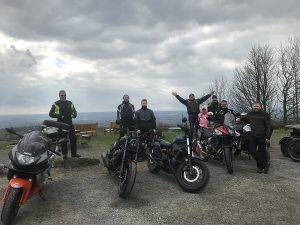 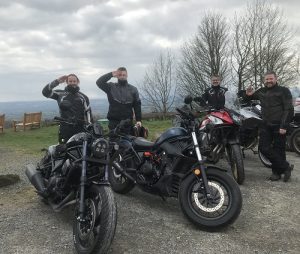 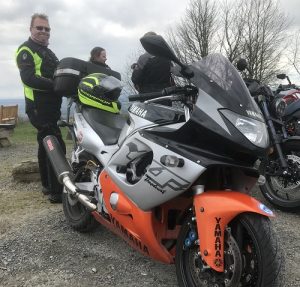 Got to love a Thundercat

Back on the bikes and trikes we headed away from Clee Hill, passed through Cleobury Mortimer, another quintessentially (c.Henry Cole) English country village before making our way through the middle of Bewdley, a charming market town on the River Severn. It often features on the national news when the river is in flood. No such excitement today thank goodness.

Skirting the outskirts of Kidderminster we headed back to the cafe via the sinuous bends of the A442 as it cuts a swathe through the glorious Severn Valley. This includes one fabulous long, long left had sweeper as you climb away from Kidderminster. This one is a particular favourite of mine. Such a glorious bend!

All back safe and sound

Everyone rolled back into the cafe not too far apart. I was pleased to have held a line of solos and trikes together reasonably well. Once back everyone had a bit of a natter and some enjoyed the excellent food and drink the cafe serves. I caught up with my old mate Paul properly over a cuppa and he attacked a bacon and egg buttie whilst I picked at a light salad… 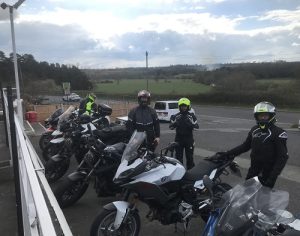 The perfect way to round off a great ride out. My salad is out of shot…

All in all a very successful ride out that everyone seemed to enjoy as much as I did. So thanks to all who turned out, rode so well and mixed so easily. Here’s to the next one!