I have been assimilated…

To be honest I can scarcely believe it myself, but after years of ridiculing the whole fascination the UK biking scene seems to be afflicted with when it comes to all things BMW flat twin 1200 shaped. Indeed after going as far as labelling the bikes themselves as ‘ditch-pumps’, I have only gone and bought one of the bloody things.

At least I have not gone for the full fat ‘Charlie and Ewan’ spec GS but rather the more road orientated RS variant. I must admit that my opinion first began to shift a couple of years ago when I rode a 2014 water cooled GS over some twisting and turning, bumpy rural A roads. I came away impressed. The motor was much gruntier than the air-cooled variants that I tried previously. Also, the computer-controlled suspension dealt with the demanding conditions with aplomb and I found myself hustling along at a decent lick on an unfamiliar bike. It left an impression…

Fast forward a couple of years and I am still using my Yamaha Thundercat 600 for touring work, but as my bones (and the rest of me!) age, I was finding increasingly uncomfortable on long runs. Things come to a head on a long run back to the midlands from Cornwall where for much of the journey I was in agony. Time for a relatively upright and comfortable bike: Oh God,  BMW GS beckons. Break out the ‘Long Way Round’ DVD…. I just could not bring myself to do it. I had to try some of the other options before I pulled the trigger. First up the Yamaha 900 GT Tracer…what a superb bike; fun to ride with an impressive engine and great value for money, but a tad too tall for me. Next up the Ducati 1200 Multistrada. This bike I loved whilst actually  onboard and riding it: Very quick and a bit of a hooligan on the quiet, but I found it hard to get on and off and it was a little unwieldy. The GS was looming, but then I remembered its close cousin…the R1200RS. All the attributes of the GS such as the impressive suspension system and flat twin 1200cc engine, but a more road orientated riding position and a neat half fairing. A quick web search turned an example at a local dealers, but that sold before I could get to it, So I wound up down in the massive dealership Cotswolds Motorrad staring at blue and white 2016 model. It was in great shape with only 7000 miles on the clock with a FSH and it backed by a two year Motorrad warranty. A quick test confirmed my positive memories of the powertrain and suspension, even if it does have conventional rather than Paralever suspension. A few negotiations saw a good deal on my trade in being agreed and suddenly I was a BMW owner. Oh God I am going to take some stick for this. 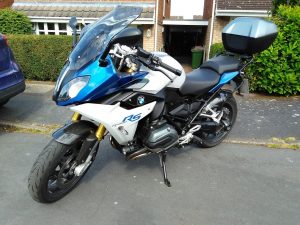 The bike, quickly christened ‘Herman’ (as in ‘Herman the German’) boasted a few firsts for me…ABS, cruise control, heated grips, integrated colour-coded luggage, keyless start and even sat nav. Blimey I will be a while reading the manual! But being a typically pig-headed bloke, I hit the start button and headed off into the blue…

The RS is a brilliant all rounder…

The bike is quick, not bonkers quick, but has plenty of grunt to really get a serious should the mood take you. The power and torque are focussed in that real-world area of the mid-range. What this means on the road is the BMW has a natural pace and almost seems to whisk itself along, covering ground in a composed, measured way. The 125bhp flat twin has tuneful exhaust, but some might like to add a little more bark to its bite with an aftermarket exhaust. But if you know what you are doing it can keep up with the fly boys should the occasion arise. There is a selection of modes available, RAIN, ROAD and DYNAMIC. They subtly alter the throttle response as you might expect. RAIN softens the power delivery and is quite a pleasant for day to day use. ROAD is unobtrusive and natural, with clean instant response to throttle inputs. DYNAMIC sharpens responses and is a little less smooth, I have used it a couple times, but more out of curiosity if I am honest. I generally leave it in ROAD mode and suspect many others will too.

Braking performance is similarly measured and capable. Linked front and back, there is ABS and traction control to be called on should things start to get a little sticky. The biggest compliment I can give them is that in 2200 miles I have not really noticed them! They just sort of get on with it! I will be keeping an eye on things in the longer term as a GS owning friend of mine had a bad experience with his bike following a front brake pad change, where the braking feel went badly off and the lever travel increased and no amount of bleeding and head scratching by BMW technicians improved things. We shall see.

One of the things that led to this bike was the impressive suspension set up and while the RS has conventional telescopic forks it still can be punted through the twisty sections with surprising ease. In harmony with the engine and brakes the cornering and feel of the bike is very composed and calm. The ride is smooth, and the bike rarely gets out of shape. The front does feel a touch soft and remote when pushing hard, but generally the bike is very confidence inspiring. You can switch between modes easily too and select damping for 1 up and 2 up with or without luggage via a button. All very clever and the technology gets on with all the wizardry in the background. Impressive.

So, what is the comfort levels like? One of the key reasons I came to this bike was the comfort and it has not disappointed. Spacious, roomy riding position. Not bolt upright, just a slight forward crouch. Comfortable seat and the controls all fall naturally to hand and logical to use. Thank God BMW have dropped those infuriating indicator switches that they championed in isolation for many years. I have done a few long runs on the old crate and a long weekend touring the Yorkshire Dales and found the bike very comfortable for up 150 miles at a time, with little or no neck pain. The half fairing (with height adjustable screen) protects well and the big stick out pots protect your feet. Even in my somewhat ancient and rudimentary riding gear I was kept dry when riding in some hard driving rain. I really like the heated grips too! 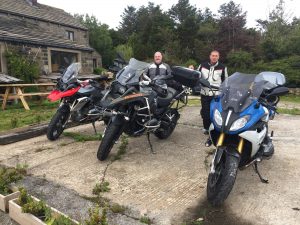 With fellow members of the collective

So, it is all positive then…no, not quite. The clocks and dash in general are a bit of a mess. The large speedo is overly marked and graduated making it difficult to read. It would be so much better if this were a rev counter and more in keeping with the RS moniker. The rest of the dash is digital and tries to get too much information in too small a space no matter which of the three modes you select. Modern TFT set ups knock this display into a cocked hat – whatever that means!? I bought the BMW Sat Nav that goes with the bike and that is a great piece of kit that can be used to display few things such as speed and range which eases the problems considerably

The luggage system is very well made, easy to fit and remove and the carry handles are most welcome. However, they are not the most spacious, especially the top box. A couple going away for an extended break would need to plan what they took carefully. Keyless ignition is a bit of a gimmick and I had a bit of scare when the battery in the fob went dead while I was parked up in the middle of nowhere. It’s just not needed. The bike is also a chunky piece of kit, and while the weight seems to evaporate the second you get rolling it is hard to manoeuvre, but I am getting used to it over time. Final gripe is the complexity of the handlebar switch blocks, but with so many systems to monitor and manipulate a degree of complexity is inevitable I suppose

It’s hard to judge reliability on just 2,20o miles, but a certain little bug prevalent in 2020 (you may have read about it…) has restricted my usage somewhat. However I have noticed that the hydraulic clutch seems to need bleeding as prior to both my recent outings I have had to pump the lever to get  a decent bite point and feel. I will be taking this up with BMW (Update Feb 2021 – BMW resolved the issue under warranty without a quibble – slave cylinder replaced)

Overall, the RS is an excellent piece of kit and that does exactly what it says on the tin. Comfortable, quick and capable. Do I regret all the years of ‘Ditch-Pumps’ jibes aimed at my BMW riding friends? No not a bit of it! I do feel a little like I have sold out, but the bikes compelling mix of capability and a manageable seat height was too hard to resist. But I still cast a wistful glance at Multistrada owners and wish I was a tad taller!

The other bikes in the frame: