Time to see how Tom Shaw is getting on with his Bobber build again:

As I mentioned at the start of writing this blog, it is my intention to change the front wheel from 19” to 16”. This will make the front wheel match the rear wheel and give me that classic American bobber look that I like so much. Unfortunately though, it is not as simple as swapping one wheel out for the other, as the 2003 Sportsters come with a “narrow glide” front end. In real terms, this means that a fat 16″ tyre will not fit between the forks!

Do Your Research and Use Your Contacts

Now after lots of internet research and forum scrolling it seems that there are several different ways I can go to get the bigger wheel in there. Some people have actually grinded the inside of their forks away to give the clearance necessary (yikes!) and some have gone for using the front end of a Harley ’48 Sportster which comes with this wheel setup. However I essentially just need some wider yokes so that I can create more space between the front forks.

I am lucky enough to live fairly close to Second City Cycles, and while I was getting the Yamaha MOT’d I took the opportunity to pick their brains. They always have a wide array of bikes in the back that they are working on, predominantly Harleys, and they don’t seem to mind too much when you have a nosey around. Anyways, the short version is that I explained what I was trying to do and I came away with a set of wide glide yokes, and a wide glide front hub that I could use on my build. 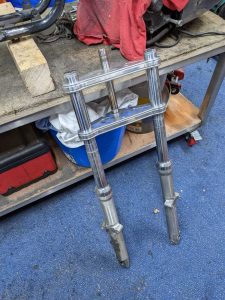 They will look better on my build than a Wide Glide!

Now these yokes are wide enough for the 16” front tyre, but they are for a different set of front forks. My Sportster has 39mm diameter fork tubes, but the yokes only fit 35mm ones, so some machining is required. Now I am DOUBLE lucky, in that it may be possible for me to arrange this machining via certain people at work who potentially may use some of the tools at my current employer, cough cough. Let’s just say I had a word in the right person’s ear, and I now have the yokes machined out to take my forks.

Time to Get Serious

Unfortunately the stem that came with the yokes doesn’t seem to be long enough for the neck on the frame, so I decided to use the one from the original yokes instead. The correct thing to do would have been to find some sort of large pressing tool to remove and replace the neck, but being the impatient and belligerent DIY-er that I am, I opened up my box of “serious encouragement” tools, and used a blow torch and a four pound lump hammer. One thing I will say, is that whenever you do this sort of heavy hitting it is important to use a drift, otherwise you will just smash up whatever it is that you are hitting with the hammer. 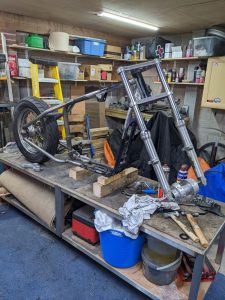 Time to polish up my Wheelie skills, or perhaps I’ll just fit a front wheel…

After a little cleaning up and some new headstock bearings I can now put the forks on the bike. I am happy with the new wide front end and I can’t wait to get some wheels on it so I can move the rolling chassis around and really get a feel for the new stance of the bike.

Fiddling with the Rear End; Is this Carry on Bobber?

Alongside working on the front end, I have also been fiddling with the rear (easy!). I want to re-use the rear brake on this build, but unfortunately the hardtail isn’t setup for a 2003 rear brake calliper. I double check the instructions and it says that if you have a pre-’99 calliper it will fit fine, and if you have a later calliper then you should buy a pre-’99 one as they fit better: Not to be dissuaded by this I get the grinder out again, it is a custom bike after all! The calliper I have mounts nicely off the rear axle, but the issue I am going to have is fitting the rear brake torque arm. For those that don’t know, this basically stops the calliper spinning around the wheel when it grabs the disc, so it needs to be strong. 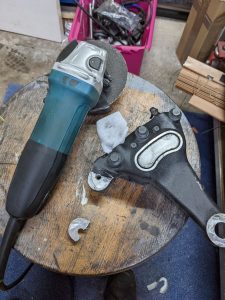 I get the calliper in place on the bike, and then I stop to think of my options. This is very common when bike building, and at times it can be frustrating also as it really slows you down. I’d love to live in a world where I can just go in the garage and spend 100% of the time chopping and fabricating, but the reality is that everything needs a coat of thinking and in my experience this can take as long as actually doing the task itself, if not longer. There are several things to consider, firstly; will this work?

Why do I put myself through this?

Whatever solution you come up with needs to actually work so your cool custom bike actually operates as a real life working (and safe) motorcycle. In this case, it also needs to pass an MOT. Secondly; will it fit? It’s easy making one part in isolation, but what about when the bike is fully assembled; will it clash with something else, what else needs to go in that area, etc. And thirdly; does it look good? If you are not making the bike look better than the original then why are you wasting your time, why did you spend all of this money, maybe you should go home and rethink your life…?!

Apologies for the brain dump, but I just want to give you an idea of what goes through my head when I’m working this stuff out. In my opinion the only way you get any better/quicker at the above is through experience. On the first bike I built I had to remake some of the parts two or three times, as they got in the way of another part, or they just broke and fell off while riding, and some of those parts I still look at now and think that I could have done them better.

‘Keep it simple stupid’, as the old saying goes

One of the best pieces of advice that I was given when starting out, is just to try and make the simplest solution possible that works. So with that in mind I get the grinder out and modify the calliper so that I can put a 10mm hole in it for fixing the torque arm. I also cut off the slotted tab that came on the hardtail and relocated it in a position that won’t clash with the rear mudguard. The hardtail came with a torque arm which is adjustable in length, this combined with the slotted tab should provide any space I need when adjusting the chain tension.

Going back to a chain

Speaking of chains, I am converting the final drive on this bike from belt to chain drive. This is a common modification on custom Sportsters, as it basically allows you to mess with the distance between the gearbox and the rear axle as much as you want. After some internet research I purchased a front and rear sprocket that should fit my bike. I have gone for 23 teeth on the front sprocket, and 48 on the rear as this replicates the original gear ratio as closely as possible. I could now wax lyrical about final drive ratios, but in my opinion the manufacturer picked that one for a reason, and whichever way you go there is always a compromise on either top speed or acceleration. 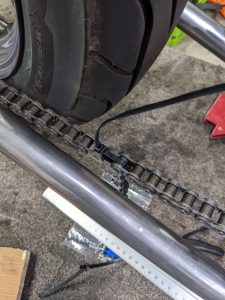 I have a metal rule, therefore I am a proper engineer!

With the engine in the frame and the sprockets fitted I use a long straight edge to check that they actually line up, which they seem to (few!). I have also bought a cheap roller chain that I fit to ensure it does not clash with the rear tyre. I know this isn’t the actual tyre I will be using, but it should be the same width, and the chain clears happily. A little cheat I use for quickly putting a chain on in cases like this, is to just join it with some zip ties. This means that the chain doesn’t have to be the right length, and you don’t have to start fiddling with split links to get it on and off. 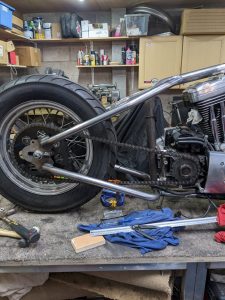 I’ve covered lots of different areas today, some more exciting than others. Next I really need to pull my finger out and get these wheels built up so I can see how the bike sits. This is important for what comes next which for me is very exiting – the major fabrication.