Adrian Budd is an expert on the underbelly of motorcycling, seeking out the bikes that others ignore and dismiss, his excellent and interesting FB group is well worth checking out.

Which bike models have seen values soar and which have seen prices fall in 2022 ? We have the fulcrum ( yes I sat O Level Physics) set at £2500. So I wonder which bikes have fallen below that threshold  and which are now over?

Based on my observations only, I have to put in three absolutely superb winners from Honda and a rare Cagiva.

One area with multiple winners are small niche scooters: Go back a  couple of years and these bad boys were cheap, cheap, cheap! However folk seem to have realised there are hardly any left bow. These little things are often tough, built to last and as a result  prices have gone daft:

For example the  Honda Spacy 125 is roaring up in value. Not far behind, catching up is the related Helix scooter. Other examples on the up include Gilera scooters from the 80s and even the 90s .

Moving  onto ‘proper’ bikes: It was my favourite inline four that was really cheap. The gorgeous Honda CBX550 FII in trademark red white and blue. It was good to see one fall under our £2.5K ceiling. However a good example sold for in excess of £3000 a few months back! So you need to be sharp to pick up a bargain 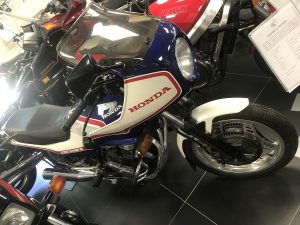 Honda CBX550FII. This one is in a museum, but there are bargains out there!

Meanwhile I am still predicting that a MZs from the 90s will start fetching decent money soon. Although the Saxon and Skorpion are still just in the sub £2.5K club, hovering below our marker. So again, best be quick if you what one cheap.

Sadly though  you can say goodbye to any dreams of picking up a bargain basement Cagiva Alazzurra.  Remember this rare Italian built in the style of  the contemporary Ducati Pantah? This was a  bike that went unnoticed when new, but  now everyone who doesn’t have one, wants one! That’s essentially everyone! Therefore prices have broken through the £2500 barrier. 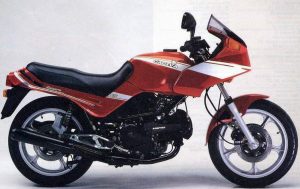 Good news is that we do have dipping into our price bracket are some big replacements,  and I mean BIG! Say hello to the Suzuki GSXR1300 Hayabusa, Honda Goldwing and R1200 BMW. All these models and others now dip into the sub £2500 group for the first time in my observation.

OK, it is a leggy one, but they can circumnavigate the globe!

We’ve even got a few heavy, classic British four stokes with kick start that are slowly declining in price. Now we may not be in Triumph Bonneville territory as yet but BSA and others, that used to be a copper-bottomed investment no longer look such a good place to put your money .

The Mighty Have Fallen

Meanwhile Royal Enfield seems such an iconic brand,  that it’s almost too hard to believe that the British 1950s classics have come to join us. Keeping them company are their modern descendants such as the Indian assembled Himalayan and even the odd Meteor. Seems that even making a classic bike look like a classic doesn’t make it immune from depreciation. 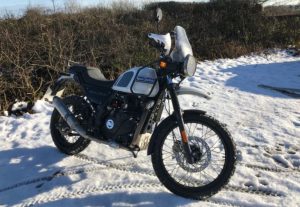 Great bike for the Money!

Finally of course spare a thought for all the youngsters who purchased Chinese bikes on the drip: Sadly many purchases made on the dreaded HP never end well. Those of us over 55 will have seen this before! Sure enough these have all dipped from £3500 in the showroom when new to well below £2500 the moment they’re first filled with petrol and ridden off the forecourt! Can be a smart buy at the right money