I have been a member of the very friendly Yamaha Thundercat owners group since 2009. I have enjoyed many superb rides and weekend meets with them over the years. In more recent years most of us have moved on to other bikes. However the bond in the group remains strong and this is the story of one of the get togethers in 2022. I hope that you enjoy it

Well it’s been a quiet few years since the last time we gathered for Wee Mac, so long as you ignore Brexit, millions being laid waste by a global pandemic and the possible genesis of World War Three that is! So it was great to be back to the simple pleasures of life as I trundled up the M6 heading for Bonnie Scotland, home of the Brave (and the Krankies…)

Actually the top bit of the M6 is actually pretty enjoyable as the scenery it slices through becomes ever more rugged. Even Teebay services are pretty pleasant which is an extraordinary statement about a UK service area! 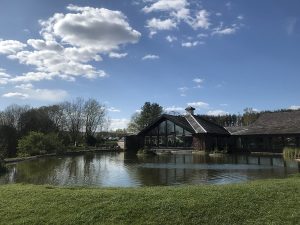 Teebay Services, not your usual cesspit!

I felt a little disloyal leaving my trusty Thundercat languishing in the garage back home, as I sped across the A7 towards Selkirk on my BMW R1200RS (aka ‘The Ditch Pump). Sadly I just find the old thing too uncomfortable for prolonged journeys these days.

Anyway after 265 miles or so I rolled up the long curving drive to the imposing Broadmeadows. What a location. It’s our tenth year coming here as a group and its brilliance remains undimmed. If Downtown Abbey were about a bunch of bikers, this where it would be set! 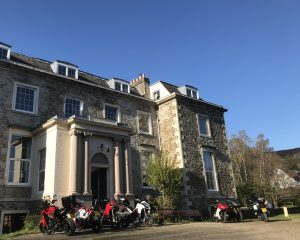 My journey had been un-dramatic  and chilled, but I soon learned it had not been the case for us all. Steve had managed to have a minor altercation on the way up and had to return home to make some quick running repairs. Luckily damage to his bike was not serious and he was shaken but not stirred. With the coolness of James Bond, he soon had his bike sorted and was heading north.

Ho, Ho, Ho and a Bottle of Rum

The group was all gathered in the kitchen and soon the chat, laughs and alcohol were flowing freely. Well most of it was: There was a slight issue with two bottles of Rum still having their security tagging in place and the delivery driver was long gone. Opps…

So in the Blue corner we had Dave H attacking one bottle  with a long knife (!!??) while in the red corner Ian and his lovely wife Gill were going the second bottle with a screwdriver (!!??). You can certainly tell when you’re  in Scotland…

After a bit of fight it was the red corner that emerged victorious with an intact bottle of easily accessed Rum.  Meanwhile in the blue corner things were not progressing well. The knife being used in the liberation process by now somewhat shorter let’s say. Not to worry the Rum had been decanted into a jug and was available for Steve when he arrived. Job done! 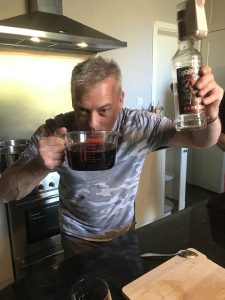 Steve eventually rocked up pretty late after a 400 mile day and one (small) crash, but fair play to him for sticking with it! It was great to see him and the rest of the crew once more.  The welcomes were warm, hugs were exchanged and we soon settled down to the traditional first evening pizzas. 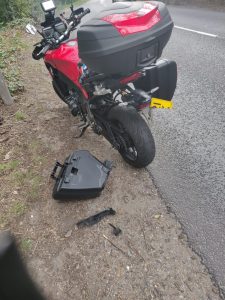 Some journeys were less smooth than others

The drink began to flow, including some of the rum, but things were relatively gentile as we had a big day on the bikes tomorrow

Well I couldn’t help but think of the late, not particularly great, Pete Burns today. In particular his hit track ‘You Spin Me Right Round Like a Record Baby’. Today was a day of many U Turns and the group did get split a couple of times.  We didn’t quite reach the heights of 2012 (I think) when 19 bikes were led into a small cul-de-sac in Selkirk, much to the bemusement s of the locals. However all this U-turnery didn’t undermine what turned out to be a cracking days riding 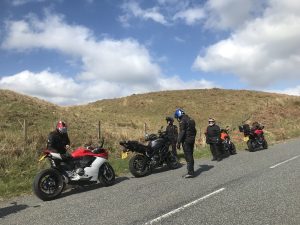 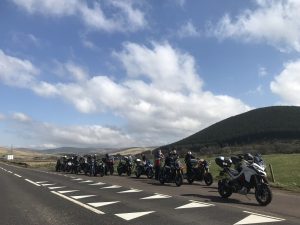 Dad’s Army had joined the main crew, but with the legendary Terry Lees no longer leading the platoon, the fight was on to be the new Captain Mainwaring! However also they had a youngster along with them. So at least the role of Pike is sorted! Rather than being a ‘Stupid Boy’ the sprog rode with considerable gusto all day.

Destination today was over on the west coast, but first up was the fabulous road to Moffat. A really challenging strip of tarmac that slices through some truly world class scenery. You can pick up the pace on this section but you do need to wary of pot-holes and some really bumpy sections.

Then There was One

As usual Ross was flying on his log-suffering, battered if rather colourful Thundercat. The last one left on the run, although a couple of us still have one tucked away in the back of the garage for old times’ sake.  His speed is especially amazing when you consider he had Ewan on the back too!

Pace was brisk in places and a couple of us did have at least one  ‘moment’. It pays to heed these ‘yellow-cards’ when the biking God’s tap you on the shoulder. Hospital beds don’t handle as well as a KTM, Ducati or BMW!

We took in a couple of interesting little tea rooms and wound up at Ballkenna Tea Room overlooking the island of Ailsa Craig. Home to most of the world’s Curling Stones no less. I just think it’s big marbles for grown ups with a spare broom personally. Call me a philistine! 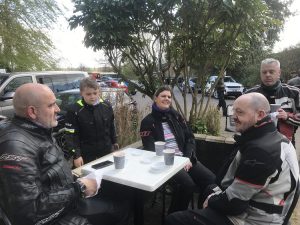 There is always time for tea Is it even a Thundercat group ride out if we don’t have to tend to Ross’s bike at some point? Ailsa Craig Island: Home of the Stones, Curling rather than Rolling you understand

On our way back we had to dive into a small town, the name of which eludes me now, to refuel the bikes. We got a little lost in the myriad of back streets and a few of us, led by Dave on his Multistrada tried to cut through a very small pedestrian only area (literally a few metres) . It ran past a proper ‘locals’ pub and one of the ‘clientele’ took abjection to Dave coming through and a most amusing altercation ensued. I decided to go the long way around…

The last few miles back to base were at a good pace. It felt great to be stretching the bike’s legs in good company again. Days like this,  in the lovely Scottish border country are the ones to savour and look back on in later years.

Dad’s Army peeled off at Peebles, it had been good to hook with them again, and meet their new recruit Pike.  He put up a cracking showing all day.

Back in the warm embrace of the roaring fire at Broadmeadows we gathered for an excellent Chilli, prepared by Chris as ever. All  washed down with a few ales and tots of our hard fought Rum. 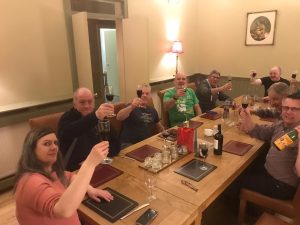 However we also paused for a few moments to remember a group member, Kev Torevell,  who sadly lost a brave fight with illness a couple of months earlier.  Open roads buddy, open roads

The usual antics ensued as we wiled the evening away. A few beers and some terrible card games. a simple but enjoyable evening. Things wrapped up relatively early as another full day on the bikes lay ahead.

Today it was the turn of the east coast to get our attentions as we headed to the mystical isle of Lindisfarne. We’ve been before but it is a great ride and beautiful destination, so why not go again?

The Platoon couldn’t join us today. They must have had a parade somewhere, but once again the roads and backdrop were amazing. A particular highlight was Melrose View. We did a line-up shot there. I used my traditional call for everyone to shout ‘Aston Villa’ instead of say ‘Cheese’ in order to raise a smile. From a camper van next our group came the call’ Super John McGinn!’ ( a popular Villa payer of Celtic origin). Got to laugh! 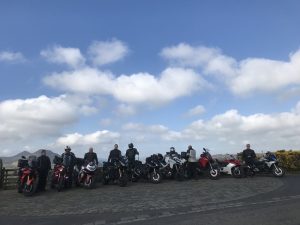 It was ‘Drive it Day’ in the Classic Car world, so everywhere we rode  we kept seeing lovely out Jags, MGs etc. They really suit the backdrop here. What a place to enjoy a bit of classic motoring!

Back in England briefly, I felt a little nervous surrounded as I was by ‘Team Braveheart’. Some amusing banter was exchanged at the border. Once at Lindisfarne the causeway crossing was as impressive as ever. Sadly the island itself was really busy and we struggled to park. We stopped briefly only to be regaled by a group dressed as pirates! Weird but fun. We had hoped to go to the huge Kielder Water and imposing Bamburgh Castle. However for reasons I can’t recall now that didn’t happen, instead stopping at a chilly St.Abbs. However all in the outing was another highly enjoyable days riding. A glorious roast dinner in the palatial dining room was  washed down with yet more ale. Another excellent evening was had by all. Once again banter and bad cards games were the order of proceedings as Ewan did a Stirling job of keeping the huge fire roaring. Well you can’t exist in a biking bubble forever. So it was with a heavy heart that I pointed the BMW back towards England the next morning. Another beautiful ride along the Moffat road was a highlight. I just wafted along this time, drinking in the truly beautiful backdrop. My Scottish friends, you are lucky, lucky people…

The trundle back to the Midlands via the entire length of the M6 was less fun, but my RS gobbled up the miles with ease. The old tub really is a sports-tourer par excellence.

I rolled back onto my drive with the better part of 1,000 miles added to the odometer. Another special weekend ticked off. Cheers to Ross and Dave for organising and to everyone else for being such cracking company. Here’s to WeeMac 23!