Back through the swirling mists of time, in the days before the plague, global economic meltdown, and rumblings of WW3 on the horizon, a few of us thought it might be fun to go to the 2020 Manx GP/Classic TT. As a group we had gone to the TT in 2015 and had an amazing week, so a return seemed overdue

A Million Years Ago

So at the tail end of 2019, which seems like a million years ago now, we got together made the bookings for the ferry and somewhere to stay. We were all excited and looking forward to our 2020 trip. Well then the world decided to have a bit of a meltdown…

Fast forward all the way to Late August 2022. The world is still having a bit of hissy fit, but at least we can travel again. Finally I was on my BMW R1200RS heading for Liverpool and the ferry to the IoM!

The group started to form up on route, I met up first with my old friend Andy, also riding a R1200, but the rather more ubiquitous GS model. Somehow we timed up our meeting so perfectly that as I rode down the slip road joining the A5 he appeared alongside me as if by magic.

It was early evening by now, so we pulled in to a small little town called Montford Bridge, where the Wingfield Arms pub. just beckoned to us. Next to join was Steve on his beloved Bonneville. He had been delayed as he had managed to wound himself whilst cropping Bamboo (in Gloucestershire??) and had to patch himself up before setting off. Steve always wounds himself before major trips. Its traditional!

We enjoyed a bit of excellent tucker, well looked after by our convivial host before making our way to the ferry port in Liverpool. We went through the Mersey Tunnel, this being a much quicker route. Anyway,  my inner child still loves to travel through tunnels!  God knows why.

Once spat out the other side we had a bit of time to kill before we could load onto to our Ferry and we still had to wait for the rest of our posse to show up. We stumbled across a superb pub in which to kill a bit of time, the Ship & Mitre. The range of real ales on sale is most impressive. It was frustrating that we could only sample one. So we made our choices carefully. 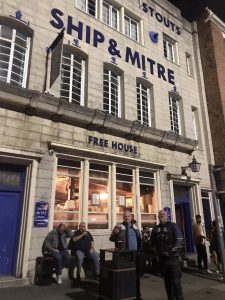 We’ll be back to sample more of the range!

We got chatting with a few locals and already the trip was proving to be a cracker. The thing with bike trips is that they are about so much more than just the bike and the riding. It is who you meet and what you come across along the way.

The pub closed for the evening so we made our way off to Steam Packet ferry terminal in the shadow of the magnificent Liver building. The terminal is appallingly sign posted so be aware of that. We only found the loading lanes by accident and then had great fun for the next couple of hours watching people ride straight past. Unfortunately this included the other three members of our group Ollie (GS) Don (GS) and Mike (Tiger). 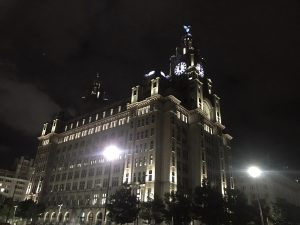 After a bit of mild confusion they did eventually rock up. It was still a couple of hours to when the ferry departed and we enjoyed the wait chatting to our fellow bikers in the queue. Even the terminal staff were friendly and funny

The race schedule had been controversially shifted late on  for the Manx GP this year. As a result we were only getting two days of racing to watch. The rest had already taken place before we got there. This had served to keep numbers down a little. Only 67 vehicles were on  our ‘red eye’ ferry for the 2am sailing

We enjoyed the breathing space on the boat as we made away across an unusually calm Irish Sea and into harbour in the capital of the IoM, Douglas. We got in at 6am, somewhat bleary eyed, but we had got our heads down for a couple of hours on the ferry and enjoyed a ‘light-salad’ before disembarking.

Lost in a Vortex?

It felt to be good on this beautiful island once more. The IoM seems to exist in a strange bubble of it’s own reality: Sitting in the middle of the Irish Sea. It’s hard to quantify exactly, but the place does have a feel and atmosphere all its’ own. Apparently it is the inspiration for the mythical Isle of Sodor, from the Thomas the Tank Engine stories for children

Even though we couldn’t check into our accommodation in Laxey until 3pm we decided to head over there to check the place out.  The place one of our crew had sorted looked great, but we just chilled by the beach it overlooked for a while before heading out to catch some racing. 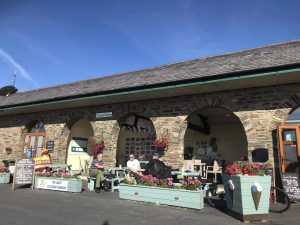 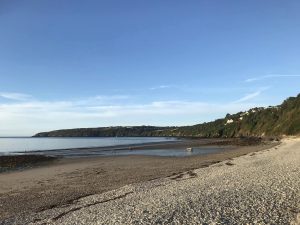 Laxey. There’s more to it than a big wheel!

Finally at the Races

Our first destination was the epic Creg-Na-Baa. Here the TT circuit sweeps past Kate’s Cottage then plunges down from the mountain section, swathing right at the Creg, where a pub is handily situated, before starting the rundown back to Douglas. We initially hunkered down in the pub having arrived way before race time. Suitably refreshed we then watched racing from both the approach to the bend and the entrance to the straight running down to Douglas. 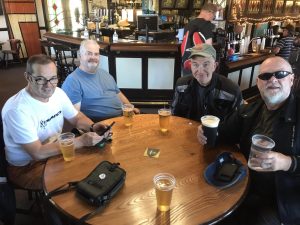 The all important first pint on the island 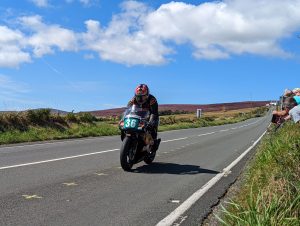 The plunge down from the mountain section

Come on Feel the Noise!

The weather was fantastic and it was brilliant to see a full day of racing from there. We got chatting to loads of fellow spectators. It was also good to cheer on a colleague of mine who was racing his Kawasaki ER6F in the Junior. He swept past us, but unfortunately he crashed out at the Gooseneck later in the race. 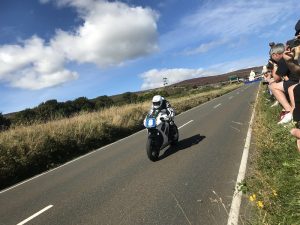 My colleague, Paul Wardell, on his Kawasaki screaming away from Creg-na-baa

I don’t follow bike racing closely, so my appreciation of the detail isn’t the best to be honest. But watching racing on the IoM is one those boxes you must tick as a biker. The Senior race was brilliant, the bikes are ear splittingly loud and to see two-strokes racing is just fantastic.

As they exit Creg-Na-Baa some riders come within inches of you. We were perched on the grass banks that line much of this section of the circuit. You feel them go past as much as seeing and hearing them. You are so much more part of it than you are at a circuit such a Donington Park for example 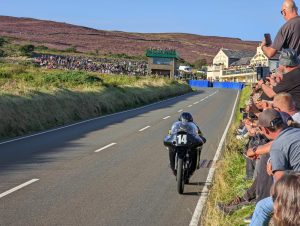 Time for a Chill and a Beer or Two

By the time we got back to the digs we had all been on the go for the better of two days, with barely any sleep. Luckily our base was a stunning, beautifully appointed,  three story house – thanks Mike!. So we sorted out a few beers, had some pizza delivered and whiled away a couple of hours chilling and exchanging the usual banter. It had been a full on two days, but so memorable. I was knackered and fell asleep in the living room until 4:15am! 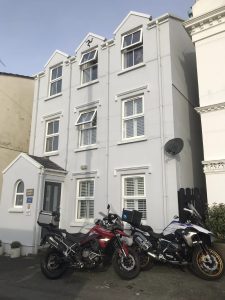 It going to be some week! More action in Part 2

The race schedule and results