Everyone Has Owned a Honda

Back in 1982 the very first motorcycle that I ever owned was 1972 Honda C50. It wasn’t even road legal; I just used to hammer about locally on it, as me and series of my equally hapless mates dished out abuse to the poor thing. However it gave me the taste for all things two-wheeled and when I turned 17 later that year I treated myself to a brand spanking new Honda CB100N-A. I loved that little bike and rode it everywhere. The gutsy Honda was thrashed mercilessly up and down the country. It got me everywhere I wanted to go as I desperately tried to squeeze every last mile and hour out of the screaming 100ccc engine 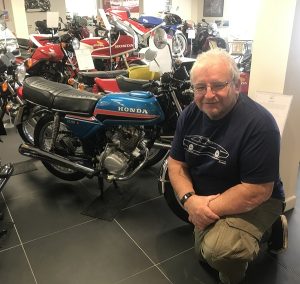 A Track Record of Innovation

It left me with respect for the brand that endures to this day, some forty years down the line. In truth I am more of a Yamaha man, but when you consider the breath of the achievement by the founder, Soichiro Honda and his workforce down the years: Innovative cars, bikes, motor racing and a myriad of other machinery, it’s hard not to be impressed. Generally well designed and crisply finished, they are always amongst the leaders in their field

The House of Honda

Against this backdrop I was delighted to visit the impressive array of bikes on display at The David Silver Collection based in Leiston Suffolk. Housed in a purpose built facility over two floors the collection holds around 150 bikes. All of them are immaculately presented. On a personal level I was particularly pleased a blue 1982 CB100N, just like the one I owned. On one level it’s great, but it does make you feel old when you realise that the bike you started out on is now literally a museum piece! 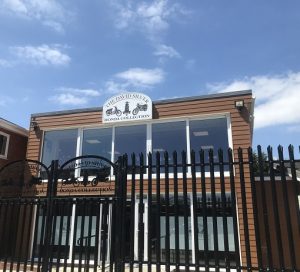 Tucked away, but well worth checking out

Genesis for so Many

In fact the debut bikes of a number of mates were in the collection, notably a CB50J and a SS50. Man those bikes were tiny! But is so good to see them persevered and immaculately presented. Honda SS50, often left trailing the boys on the FSIEs, but check out the mpg!

The bottom floor has the bikes around the outer wall arranged in a time line. It spans the period from the creation of the Honda brand, quite literally from the ashes of WW2, to around the late 90’s. It was a great way of getting over the progression of the company from a ‘a man in a shed’ to the industrial powerhouse that it is today

Everyday is a School Day

To be honest much of the early history of the company I was not fully aware of. Some of the machines produced in the 1950s were clever and very stylish. You could see why they have become so successful: The roots are strong. I knew of the Benlee and the seminal Cub range obviously, but I found the little parallel twin Jumo of 1954 fascinating. A baby BMW. A Flat Twin Honda, who knew?

My Own Biking History

It was great to see bikes I owned in there such as the CB100N, CB250RS, CB250N and VF1000. But also the rarities we didn’t get in the UK like the 2-stroke MVX250. I am pretty sure it would have sold well up against the likes of the TZR and RGV 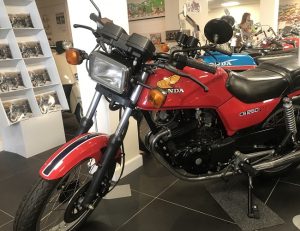 Honda CB250RS. I’ve had a couple of these brilliant bikes. More than the sum of their parts 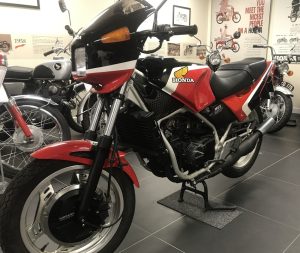 Honda are fundamentally a Four-Stroke company, but this MVX250 would have been an interesting alternative to my RD350YPVS

Upstairs the collection had a fantastic array of Police bikes and it was a relief to study them under more, how do I put this? Relaxed circumstances! I wanted to take the Monkey bikes home! What’s the Japanese for Old Bill? 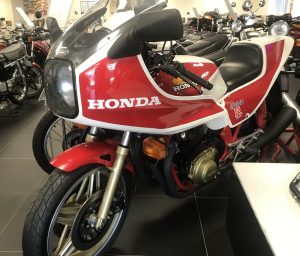 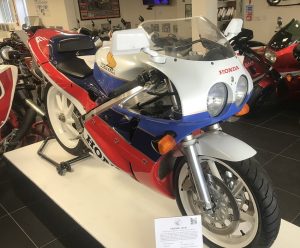 RC30, A legendary race bike in Superbikes, Endurance and on the Isle of Man at the TT Cub and CB750K. The CB was the first superbike of the modern era 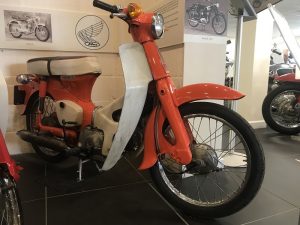 Billions of people can’t be wrong. The Cub Well Worth a Visit

All in all a fantastic place to visit, but a couple of pointers for improvement. Don’t follow the post code on your sat-nav. You wind up on a residential street around the corner! Also I think disabled access to the upstairs could be a challenge. But for the £10 entrance fee you are in for a proper treat even if Honda bikes are not your bag

Some of my Honda based adventures as a spotty youth: