One of regular contributors was thrown the keys to a R1250GS whilst his F900XR was being serviced. This what he thought of the big, all conquering BMW:

I’m not one for hype.  In fact I tend to avoid anything that gets hyped up just to be contrary.  Sometimes this means I miss out on genuinely good things; the film Avatar for example. I really liked that when I finally watched it.  Same goes for the Harry Potter movies: I stubbornly avoided these for years.  So what will I make of the most hyped bike of the last 20 years, the BMW R1250 GS?

One in, one out

It starts with my bike needing a service. I booked it in at Bahnstormer BMW, where I bought it, which is an hour or so from home.  When I made the booking they reckoned it would be 2-3 hours in the workshop. That’s too long to hang around the dealer (although they do have a nice cafe) so I enquired about a courtesy bike.  They said they could let me have something for a few hours and so the path to the big Bimmer was set, although I didn’t know it at the time.

I took the day off work and decided to make an outing of it.  The dealer is just along the road from Loomie’s Moto Cafe, and since my bike was booked in for early afternoon I decided to have lunch there before dropping the bike off.  It turned out to be breakfast really, but who’s clock-watching? 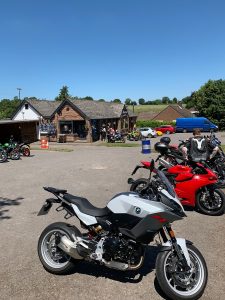 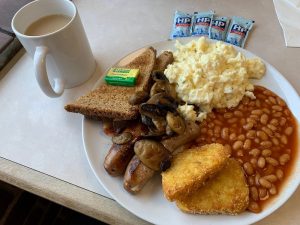 Suitably refreshed I pushed on to the dealer and dropped the bike off.  When I enquired about the loan bike they said “we only have a 1250 GS left, is that OK?”.  “Fine by me” says I, so outside we went for me to pick it up.

Luckily the GS uses the same BMW Navigator mount that my bike uses so I swapped the unit from mine to the GS and set a destination.  I had done some research and wanted somewhere to head, so I picked Portchester Castle, near Gosport, for no other reason than it was near the sea and had a car park.

Getting on the GS I was a bit surprised; it kind of shrinks around you because it doesn’t feel as big from the saddle as it looks from the ground.  The side stand is quite a way forward though and as I went to kick it back I caught the gear lever and knocked it into gear. Luckily I didn’t drop it as it lurched forwards and stalled!  With that mishap out of the way I got going with no further issues and started to analyse this legendary vehicle.

At this point I have to say I have read many reviews and articles about the GS, where it always comes out on top, where it is universally praised and owners are evangelical about them.  I had some high expectations of this thing: I had never ridden a flat twin before, nor a bike with a longitudinally-mounted engine, nor one with Telelever front suspension. All of these things come up as being part of the success and character of the Bavarian Motorcycle Wonder. 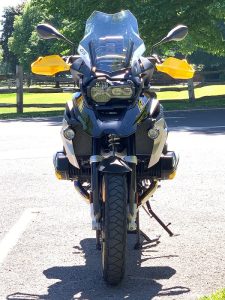 They still remind me of Sir Patrick Moore 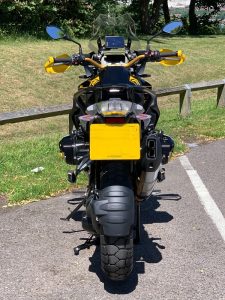 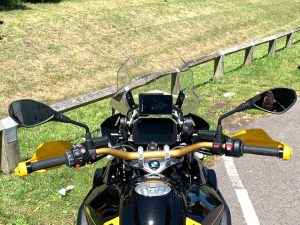 It even has a Telly!

First impressions? A bit non-plussed if I’m honest.  Sure, it was a nice bike and went well enough but after all the talk of torque and acceleration unbecoming of something so big, it never really blew my socks off.  It pulled well in every gear but then my bike does that, as did the ones before it.  The ‘blingy’ TFT dashboard was very similar to mine, so that wasn’t a big wow either.  One thing it did do well was comfort – the saddle was not too hard and the screen and fairing kept a lot of the wind off – however I found the saddle a bit long, meaning I had to sit quite a way back before I could nestle my bum against the raised pillion seat, which is my preferred stance.  Having done this, the bars were a bit of a reach – not too far but more than I was used to.

Get the mode right

Once I had acclimatised to the cockpit I found it to be perfectly pleasant, easy to ride, surprisingly agile and generally a nice place to spend the afternoon.  I did find the suspension a bit soft in ‘Road’ mode, causing it to pitch to and fro on throttle changes and gear shifts – switching the ESA to ‘Dynamic’ mode made it much more to my liking.  I liked the little pops and burps from the exhaust on the overrun, although there were also some noticeable vibrations from the engine.

Time for an ice-cream

I made it to Portchester in good time where I carried out the photography – warm work that required an ice cream to cool down. 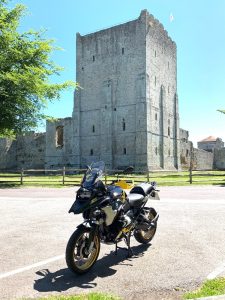 Towering Bike and a tower! 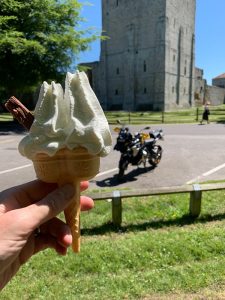 All together now: ‘Just one Cornetto’

Once the money shot was in the can I set the Navigator to take me back to the dealer by the winding route and departed.  It definitely chose some roads I would otherwise never have found, a great mix of B and uncategorised roads, sometimes going down to single lanes with a heavy gravel centreline.  This was probably a good way to really test out the abilities of the big bumblebee – I never actually went off-road but it did get a bit loose underneath me a few times and was confidence-inspiring when it did.  I also did some riding stood up on the pegs, to help see over hedges and around corners and it really suited this stance well.

As I neared the dealer I replaced the fuel I had used and headed back.  As I did so I mulled over the time we’d been together and found myself wondering if I had missed something.  I enjoyed the afternoon on it and I can see why people like them – I would certainly find it good for doing big distances, but I never really got a “WOW!” from it.  Perhaps I was expecting too much, perhaps I had been spoiled by my own bike, perhaps an afternoon is not long enough to make a judgement or perhaps I’m just not a GS person.  I was once told by a GS owner that if I took his for a ride I would go out and buy one.  Well, I rode one and didn’t buy one.  In fact, getting back on my freshly-service F900XR for the ride home, I was even more impressed with it.  It suddenly felt a lot smaller but also a lot more lively, more agile, almost as fast and – crucially – more my cup of tea. 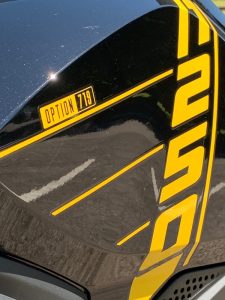 BMW R9T – Why Have Vanilla When You can Have a Strawberry Sorbet?