The Ramsey Sprint has been running for many, many years on the Isle of Man and is always a popular event.  Seeing as we had already missed out on so much action due to the shift in the main race programme we decided that this was the place to be this Sunday. A good way of following up on an excellent first day on the island

Andy, doing a very passable impression of Mrs Doubtfire, ably assisted by my good self, a creditable Mrs Brown had rustled up breakfast for the rest of our crew. Suitably fuelled up, we leapt aboard our bikes and headed out of Laxey. Incredibly, even by our standards, we managed to get split into two groups, heading in two entirely different directions almost immediately. Ironically, Don, who has navigated Ocean going yachts across the globe managed to the head entirely the wrong way on a small island.  A lack of direction a British politician would be proud of.

Worth it for the Bike Park Alone

Anyway after a bit of toing and froing we did all manage to arrive in Ramsey vaguely together. We all parked up on the seafront and trackside bike park. Now this was a treat in of itself with row upon row of simply delightful bikes of all ages, types and genres. I think the Manx GP and Classic TT attract a more eclectic range of bikes and there were some proper beauties in there for us to admire. Worth the ride over just to see them all 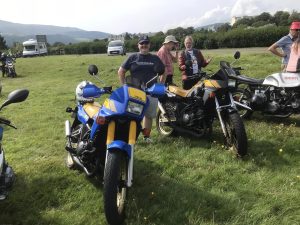 The Bike Park was knee deep in beautiful bikes, but Andy has owned two TDR250s so this the picture you’re getting! Anyway I love two-strokes!

The Sprint track itself is a 1/8 mile straight and the quick boys on some serious tin are streaking to the finish line in around 6-8secs. These are really great to watch, and you can also sign up for a go yourself I believe: Shades of the old ‘Run-What- Ya- Brung’ days at the Pod and Warwick Raceway back on the main land.

There were all sorts of things running: Everything from tricked out mopeds, to V-Max Yamahas and stretched turbo bikes. My favourite though was a 10-year old lad on a stretched twist-and-go 50cc moped drag bike style in the spirit of the classic Suzuki Katana. Brilliant! He was been properly egged on by his proud Mum! Start them young! 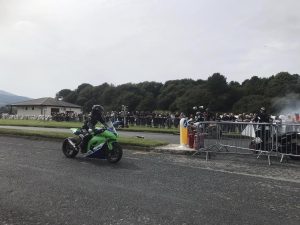 Stretched ZXR Typical of the bikes running at the Sprint

After an enjoyable few hours at the sprint and looking around the rather charming town of Ramsey we decided to ride over to Douglas to check out the pits. We really enjoyed the ride from Ramsey to the capital, heading over the mountain section, plunging down to the Creg, where we had been spectators the day before, and finally down into Douglas. We had to be reasonably restrained as the Police presence was heavy. But still great fun and a beautiful backdrop that never loses its appeal.

Benefiting from the more relaxed atmosphere of the Manx we parked up easily in the shadow of the main Grandstand on the start finish straight. We headed off to check the food/fan hubs and of course the pits complex. 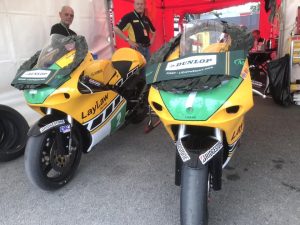 Some fabulous race winning bikes in the pits 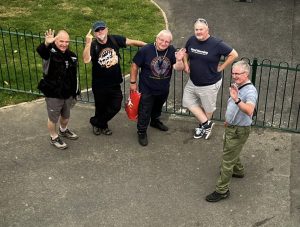 If the Devil could cast his net…

It was great to see all the race bikes and the team techs and mechanics beavering away on prepping bikes. Some lads were happy to chat way and show what they were up to. Great that they so generous with their time under the circumstances. Some of the big names had left already as the last day of racing was tomorrow, but it was fascinating all the same.

Unfortunately I also discovered that my friend who had crashed at the Gooseneck in the Junior had managed to hurt himself sufficiently badly to be hospitalised! Ouch! Racing on the island is a risky business as we are all too sadly aware of.

Welcome to the World!

Once back at the digs we re-fuelled on the best ready-meal curries I have ever tasted (thanks CO-OP!), before heading to the nearest pub in Laxey on foot,  or ‘Shank’s Pony’ as we of a Celtic origin like to say!  The Shore Hotel looked closed from the outside but was in fact undergoing heavy refurbishment and the inside was as warm and welcoming as the bar-staff and locals. We had a highly enjoyable evening. especially so as the news came in that I had become a Granddad again! This meant raising a glass to ‘Wet the baby’s head’ as the old saying goes. I don’t make the traditions, but we do like to keep them! Welcome to world little Mya! An excellent way to round off a superb day 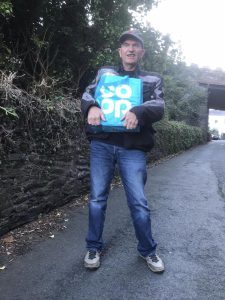 Mick loaded up with Ready Meals! We should have mentioned the bag has handles, bless him!

After another breakfast show from Doubtfire and Brown (is it me, or does this sound like the world’s worst cop show?), we walked up to Laxey station. From here the magnificent old Tramway runs up to the top of the mountain course. The fabulous old coaches are not a restored heritage line. Oh no they have been in service pretty much constantly for over a century. Since 1893 in fact! When even McGuiness was but a lad. They are as much part of the IOM experience as the racing itself. The lovely station at Laxey

Foggy, but not the Ducati one!

Unfortunately on this particular day we were heading straight into the mist that is so notorious for hanging over the mountain section and wreaking havoc with the race schedule.  Having said that it gave the trip a certain atmosphere and we decided to go right to the summit as we were early for the racing in any case. Once there we took in the ‘view’ briefly before heading into the tea room for a cuppa! 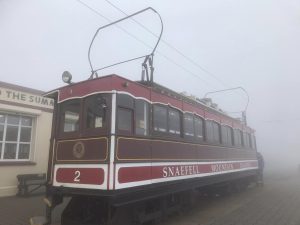 Trams in the Mist

Suitably refreshed we took the next tram down to Bungalow section. Before the racing we decided to check the recently refurbished and rather excellent ‘Victory Cafe and Bar. I managed to face-time my daughter and new grandchild too!

Whiskey and Racing can Mix!

Not being on the bikes today we partook of the TT whiskey there and I raised a glass to my old mate Nick, who is normally my drinking partner when spirits are about. He is a bad influence on me. Speaking of old mates I also bumped into one of the boys I toured Europe with (on a bike, I’m not in band!) back in 2007. Great to catch up with him after so long! Says it all really The fog cleared and the action got underway. The racing was superb today and we viewed the action from several vantage around the section. At one point Andy and I inadvertently wondered in a section of the infield when spectators are banned. Just as the first bikes in the Senior were (very) rapidly approaching. Images of headlines along the lines of ‘Idiot Brummies Halt Senior TT’ flashed up briefly in my head! But we managed get back in bounds before disaster struck!

It was brilliant to watch the Classic Superbike race in particular as this event probably the most relatable period for somebody my age. I won’t bore you with hyperbole riddled descriptions of the racing, but suffice it to say it was amazing to watch these classics been hurled across the mountain, through the turns up and through The Bungalow and on to Windy Corner. We all really enjoyed watching the racing, but as we had to get the last tram back down we didn’t quite catch all the action which is slightly frustrating

However once down the from the mountain, having caught a glimpse of the iconic Laxey Wheel, the mist had cleared by now obviously, we did catch a burger and pint in the rather excellent Mines Tavern that sits next to the tram station. It was great sitting there in the sun now just chilling as a group.

We got chatting to a group of bikers from Germany who rocked up on some lovely bikes. One was on a stunning CRS. I don’t know if they are any good, but man it looks good.  Another was on a old Brit bike made from all sorts of bits and Bob’s. He was highly amused as we taught him the phrase ‘It’s a Bitza’ – bits of this, bits of the other! It’s great meeting up with folks in this way. Again the trip is as much about this sort of thing as the racing itself.

Back at the digs chilling out one of our crew inadvertently provided us with a highly amusing side show as he battled to heat up his ready-meal curry in the microwave. I think a half decent chef could have rustled up one up from scratch quicker! The rest of the evening was spent just chatting away and gently working our way through our beer supplies. Simple pleasures are sometimes the best

The race schedule and results