When its time to decide to purchase a new Motorcycle there is so much choice these days, you only have to rock up at biker café, a bike night or an event like  the TT and there will be hundreds of bikes and not one of them will be the same. So why did I opt for the Kawasaki Ninja 1000 SX ? 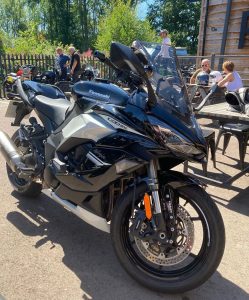 Why the Ninja Got the Nod

A few reasons, the brand name and reputation, I’ve owned two Kawasaki’s before and  loved them both. Then there is the aesthetic: A bike has got to look right obviously.  Also I was looking for a faired bike after many years of riding naked bikes. Finally a key factor for me was being able to put my feet on the deck!

My initial thoughts was to go for a Yamaha Tracer 9000 GT but when I called into Fowlers in Bristol one Sunday morning I was only just able to touch the floor on tiptoes and just didn’t feel safe. I wasn’t too impressed with the split two piece TFT screen either.

I had also considered the new Triumph Tiger 900, However I had the same issue with the seat height.  As a result the Adventure Tourer option didn’t seem to be right for me, so my thoughts turned to Sports Tourers.

So in November 21 I made the fatal mistake of dropping into Completely Motorcycles Worcester “just to have a look”!  The Ninja 1000SX caught my eye and I could touch the floor flat footed too: Result!  So the following Saturday I booked a test ride and on damp cold November morning took a ride out to Bromyard on the A44 and back and just loved it.

Good Deal, left me with no option!

The next thing I know, after being given a very generous trade in offer on my FZ8 (only £2500 less than I paid for it 8 years previously!), and somehow managing to convince the Finance Director (AKA the Mrs!) that it was good idea, I’d put a deposit down on this black and White 2022 Performance Tourer edition.  2 weeks later it’s delivered to my house at no extra cost just in time for Christmas!

So a bit of the technical stuff,  the Ninja 1000 SX Performance Tourer is 1043 cc 140 bhp16valve in line four, with more power and grunt than you will ever need on normal road riding.  It pulls from 30mph in 6th gear if required but use the gear box and it really shows its capabilities.  You’re doing license loosing speeds very effortlessly and its sewing machine smooth.

It came fitted with a Carbon Fibre Akrapovic end can as part of the Performance Tourer option.  It’s more pleasing to the eye than the OE Standard “rocket launcher” and gives it a deeper tone but it’s not loud courtesy of the catalytic converter. The baffles can be removed. However it means drilling a 12mm hole in the Carbon Fibre tailpipe and according to Face book group comments it doesn’t make much difference to the noise levels. Understandably then I haven’t bothered.

Other options that come as standard on this version are the Kawasaki OE heated grips, crash bungs, the tinted tourer screen, rear seat cowl and colour coded hard Panniers.  It has a very intuitive TFT screen (a bit more about that later) Kawasaki’s Traction control system with 4 settings, Rain, Road, Sport and rider specific. Rounding off a very comprehensive list are a quick shifter that handles both up and down changes, and finally cruise control. 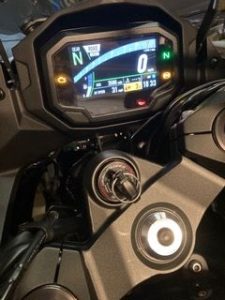 The OE heated grips look the part and are easy to operate but I would describe them as barely adequate. They don’t get hot, even on the hottest setting, just about take the chill off at best.

The tourer screen is slightly bigger than the standard one, which you get in the box if you ever want to re fit it. It’s also is slightly smoked and is adjustable through four heights via simple push button.  I have experimented with each setting and whilst you can tell the difference it’s minimal: I tend to leave it on the 2nd or 3rd settings. These seem to suit my 5ft10 frame and does a good job of taking the wind and rain off your chest.

The seat cowl replaces the standard rear seat, (again this also comes in the box) and looks the part. It’s very simple to remove and swap with the pillion seat.

The colour coded panniers are excellent, they look the part and locate and lock onto the rear Grab rail.  Slot in and slide forward and lock in place with the ignition key, the opposite to remove.  The LH one was a bit stiff and tricky at first but that’s eased off with use.  They unlock and open like a book and come with a pair of very natty inner bags that have a carry handle that are perfect for small clothes and perfect if you have an overnight at a B&B, no need to remove the panniers which are big enough to fit a full face helmet. 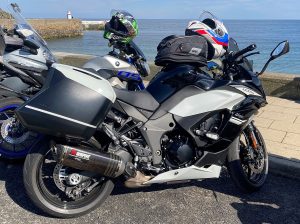 Doing what it is best at

The Telly is Good

The TFT screen is easy to read and has two basic themes.  Both options have a black background with white lettering or light background with black writing.  It’s fairly easy to navigate the various screens. All the usual information is there: Time, fuel consumption, range, etc.

It has Bluetooth connection to your phone but doesn’t have the SAT Nav capability like the New Suzuki GSX 1000 GT.  The Kawasaki Rideoligy App does connect to your phone. Sadly it is a real pain to set up, but you can review the settings etc from your sofa. However, to be perfectly honest it’s a gimmick only and not much use.

The quick shifter is a revelation! I’ve never had a bike fitted with one before. It makes going up though the box an absolute delight. Just keep the revs on and click it up through the box with ease.  It’s very smooth and really easy to use. Going down the box is not quite as smooth and takes a bit of getting used to.  I tend to use the clutch on anything from 4th down. The system can feel a bit clunky. On the plus side it’s great for dropping down 2 gears coming into roundabouts!

The cruise control is fairly simple to use: One button to switch it on. Then up and down to adjust the speed by a mile per hour at a time.  Close the throttle or touch the brake and its switches off.  Very handy on long motorway stints or speed restricted areas but not used it much on normal road use.

Traction Control system has 4 settings, Rain, Road, Sport and a rider choice option.  I tend to leave it in Road. I have used Rain (when it’s been wet obviously!!)  and tried the Sport option too. The later you have to try! Overall though, being honest it’s difficult to really notice the difference under normal road use.  I guess it’s doing its job without being obvious. It’s a nice comfort blanket I suppose!

Out on the Road

So what’s it like to own& ride? In short it’s excellent: The best bike I’ve ever owned and ridden.  Power is smooth and smile inducing, handling is solid and predicable, corners brilliantly on the OE fit Bridgestone S22 Tyres. I’ve just replaced them after 3500 miles with a new set of Bridgestone T32’s. Hopefully these will be as good but last considerably longer. 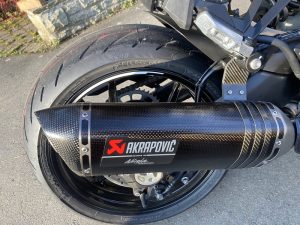 The fruity pipe just adds to the fun!

Grinning from Ear to Ear

So In summary: If you’re looking for a good all-around bike that’s fun for scratching on a Sunday morning, or a tourer to ride all day long with the practicality of the panniers and cruise control etc. then I can highly recommend it.  It brings a smile to my face every time I ride it and in my opinion it’s a looker too, particular in the black and white colour option.