Steve, who gave us such a superb insight into the work of ‘Bloodbikers’ has been pondering what he thinks of his own ride…a 2017 BMW S1000XR….seems it might actually be a bit too good. That light thudding noise you can hear is a BMW development engineer head butting a wall in Berlin (Not that one though…)

The 2017 BMW S1000XR is quite simply everything you would ever want in a sit up and beg ballistic missile: Superbike quick, adventure bike all day comfort and it turns and handles like a sports bike…… but the more I own it, the more its beginning to make me feel a bit meh! 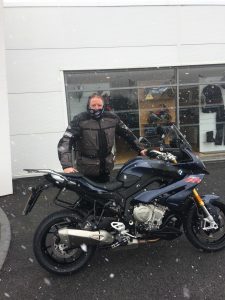 I bought the bike in 2017 with a few miles on, I still remember doing the deal, paying the money and on collection day went to the dealers to see the bike sat at the front of the showroom with my name on. (BMW, it’s the little things) it was a cold, snow filled March morning and the sales guy was desperate for me to leave the bike there for fear of me crashing in the conditions but I assured him I’d ridden in worse. That ride was a non-event but the following almost 3 years since have been a bit different. The bike has all the toys, dynamic traction control, ABS, quickshifter with auto blipper, 4 riding modes from rain (which dials up the ABS, traction control & power) to dynamic pro (available via a separate chip that plugs in under the seat). This chip was given to me at the dealers and told to plug in at my own risk as it is the “all bets are off, you’re on you’re own” mode which turns all the rider aids off and gives a great over run burbling engine note.  Combine all this with electronic suspension, Race modes and it fair to say the bike has everything. The (claimed) 165bhp (the engine is a re-tuned S1000rr sports bike plant) is on tap and easily accessible, it is bullet quick off the mark and pulls like a train, it is a joy to ride, great and surprisingly manageable in the twisties, capable of easily keeping up with the litre sport super bike and probably quicker in the right hands. 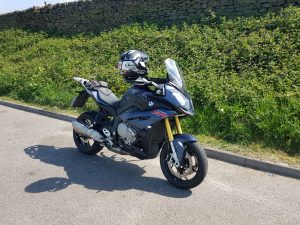 Things did get a bit sunnier later thank goodness…

Another thing worth noting is a lot of owners complained of bad vibrations through the bars and footpegs. All manner of bar ends screens and other mods have had varying degrees of success in nulling them but I have honestly never suffered with them. It seems each bike and owner is different but my model was factory fitted with a thicker rubber gasket between the bars which seems to have eliminated it. That and I came from a 2003 Triumph Tiger 955i that was a bone shaker by comparison with the silken BMW.

In truth it is made for a taller rider than I(though there are 3 factory heights available) but I still find it all day touring comfortable. When need the Brembo front and rear brakes stop you on a sixpence too….. you seriously can’t ask for more from a motorbike….. or so I thought. I don’t know, I think its just become a bit vanilla. Yeah its a lovely looking, capable, do all motorbike. You know exactly where you stand with it, it starts 1st time, doesn’t skip a beat, is lightening quick, pulls through the rev range, sofa comfortable and with a few additions (screen, end can, different luggage as the BMW options for this model aren’t great) is a fantastic bike. I’ve been all over England, on bike rallies loaded up with tents and toured Scotland a couple of times and loved every minute of it. With the rider modes dialled down you can get the back end moving out of corners, during spirited gear changes the front will lift and you know that the bike is going to sort all this out……. and that’s the problem I think. The first time I accidentally (I know) power wheelied my old 954 Blade it scared the living sh*t out of me, but it lit a fire in me, made me think about what I was doing. The XR, as great as it is, just doesn’t quite frighten me in the same way. Not within my capabilities anyway.

I’m keeping the bike, just because its just such a great bike for every occasion. I wont get rid of it and I can probably say I’d have another in the future, I need that dependability, something to rely on. Call it steady organised efficient German fun if you will.

I am however looking for something else to keep it company , something different….watch this space