I have been running my BMW R1200RS for over two years now and have really enjoyed the experience overall.. The RS is great to ride, surprisingly swift for a big lump and fleet of foot in the bends. For a relatively hefty bike it can be chucked about with aplomb. However it is nearly seven years old now and my thoughts have started to turn to potential replacements

One of those on my radar is the Suzuki GSXS1000GT. Launched to much media fanfare about a year ago I have been trying to get hold of demonstrator ever since. Only now has my local dealership had one on their fleet. So I leapt at the chance to finally ride the GT, even though I may not change bikes right now

Initial impressions as favourable: It’s a modern, good looking bike. The front-end styling might split opinions, but I like the aggressive, purposeful stance it projects. More sports than touring, which is a good thing! 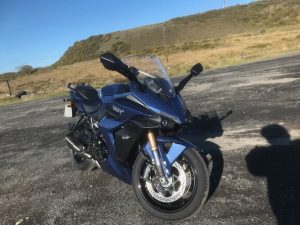 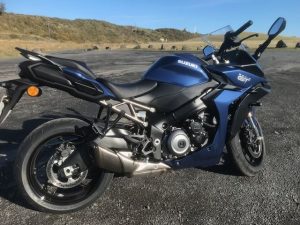 Climbing aboard the first big thing for a stumpy such as me is can I get on easily and put a least a bit of my foot down. Big fat tick for both.  All positive so far. The side stand is easy to reach and retract too.  I am a happy boy! It is surprising how often such basic ergonomic issues get forgotten

The Suzuki fires up sweetly as you would expect for a new four cylinder bike. The TFT screen, with the tachometer  function dominating the display is crisp and easy to read. Really excellent.  My current bike, a 2016 BMW R1200RS has a terrible dash pack and the TFT would be a major upgrade 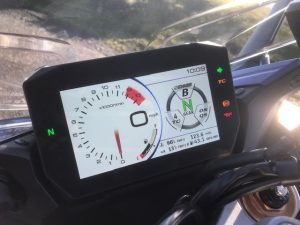 I took off and was immediately struck by how smooth the engine is and by the quiet, slick operation of the gearbox. Again booth areas where the GSXS is superior to my BMW. On the down side there would be a chain to maintain and eventually replace I suppose

So how does it go? Well it is essentially a GSX-R for old fatties, so the answer is pretty well! With 152bhp how could it be anything other than pretty potent!? To be honest I never revved the bike past 8000rpm on my ride and never felt the need to. The power delivery was smooth and clean right through the rev range. That smooth gear change, a bit of a Suzuki character trait in my experience, helps make that storming performance really easy to access. The bike was fitted with a quick shifter, but 42 years of riding using the clutch means I just didn’t use it. I am sure it’s really good, but I was covering ground really briskly pretty much straight away as it was 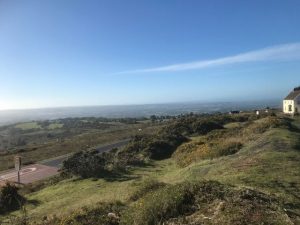 Great day to be out on a bike

There are three engine maps to choose from A, B and C. Dynamic, Normal and Peeing down respectively. I left it B. You could also change the level of the traction control over five settings. I went for level four and left it there as I’m not one for constantly phaffing with settings to be honest. So all in the power train off the GSXS provides a fast, revvy and responsive fun package. Top marks!

Handling on the countryside A&B roads I tried was very assured and the twists and turns were despatched without undue drama. Undulating twisting bends and passing through some lovely Worcestershire countryside, this is typical sports-tourer terrain and the big Suzy felt very much at home.

Riding position itself is upright and really comfortable, only a slightly hard seat undermined things s a little. But that just might be me.

The bike is well equipped, but there are some omissions that I find a little odd. No heated grips for example. They are a very expensive option (over £400!). I would happily trade the quick shifter for them personally

Is it the One?

In summary over my couple of hours on the bike I confirmed what I was expecting. Nicely made, comfortable and quick. It really is a excellent bike for the price. £11999 for the base model, and around £13000 if you want the higher spec model with the integrated side cases and tall screen.

However it didn’t get me on an emotional level. So despite being a really excellent bike, I decided it’s not for me overall. The hunt goes on.

Thanks to the Mootorcycle Mart of Kidderminster for the use of their demonstrator: