Not Your Normal School Fundraiser!

Most primary schools run a myriad of fund raising events. Often they are derivatives of the Bazaar, sponsored walk,  or Jumble/Table top sale theme.

So when a school does something a bit different, I think it is to be congratulated for thinking ‘out of the box’ as it were. When that something different is a classic motorcycle show, then they should be doubly praised!

Lacon Childe school located in the charming and quintessentially (©Henry Cole) rural English village of Cleobury Mortimer, Shropshire, does precisely that. For many years now the school PTA run an excellent, well regarded classic bike show. They hand over the school/gym to a display of stunning historic bikes dating right from the flat-tank era to the 1980s.

British bikes obviously feature heavily, but a healthy number of French, German and Japanese bikes muscle in on the action too. In fact my personal favourite of the show was a beautiful and rather stylish Ducati 450 single. 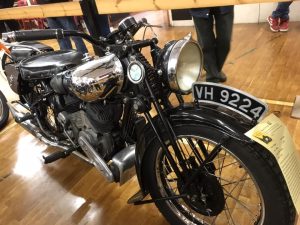 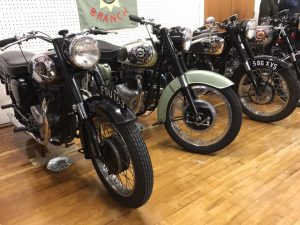 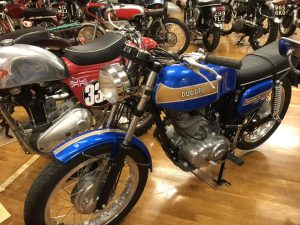 It was also good to see some off-beat bikes too, such as speedway and completion trials bikes. All were immaculately presented and accompanied by an A4 fact sheet. One slight criticism here is the sheet was often taped to the headlight of the bike: A little stand next to the bike so as not to spoil photos might be a tip going forward. The kids could make them in Woodwork, if they still do that sort of lesson these days!

Most Influential Decade on a Personal Level

I do love British and older European bikes, but as my formative biking years were in the 1980s it was good see the era represented by a Honda CBX550 and a truly stunning Ducati 851 Superbike 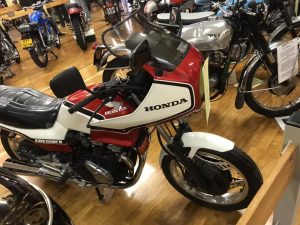 Beautiful 851. See what I mean about the A4 paper?

On the Hall stage the brand new BSA Goldstar took pride of place. A local dealership, Midwest Moto, had brought along an example to show it off. They also had a impressive Indian and Harley Davidson based Trikes and Fantic 500 with them. New bikes, but somehow in keeping with the vibe of the day 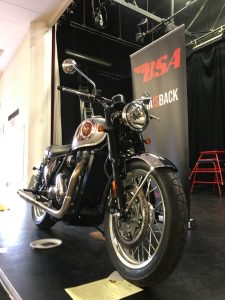 On sale now, the BSA Goldstar! 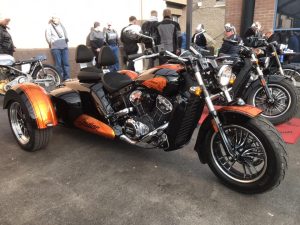 Typical of a PTA they never miss a chance to flog cake, biscuits and tea. All were on offer in the school canteen along with that staple of British biking, the bacon or sausage sandwich! It was amazing to see hall that is normally packed with noisy young children, instead of full of noisy aging bikers. We are still kids at heart. In order to support the school I had a sandwich and a cuppa. It’s a duty thing obviously… 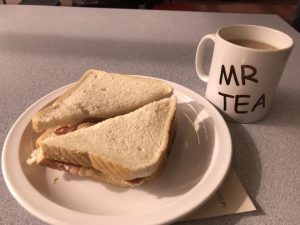 They had sold out of light salads by the time I got there. I was gutted…

Outside we were treated to the delicious howl of race tuned Triumph T160 engine being revved. Man that sounded wicked. Of course also outside was the bike park and as is often the case at show, provided nearly as much of interest as the show itself. There was the very well engineered ‘home-brew’ Triumph Quadrant. Never a bike that Triumph produced apart from a solitary prototype, long since gone. Somebody took upon themselves to make one for themselves and you really couldn’t tell it wasn’t a factory bike except for the inlet side of things. But at first glance it looked’ factory’. That’s always a difficult trick to pull off with a special. 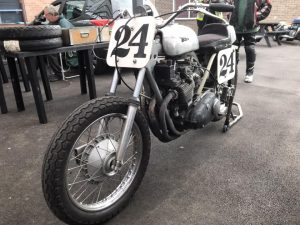 The rest of the bike park was dotted with interesting bikes of all types, shapes, brands and ages. Always worth a wonder about. One of the least glamorous bikes caught my eye; a  Honda CD185 Benly. I used to have one and couldn’t tell you the last time that I saw an example 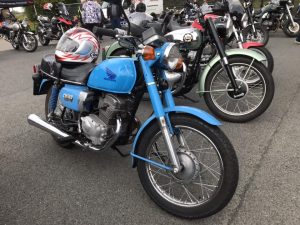 To summarise: Well done to Lacon Childe School for staging this excellent event. It might even serve to promote an interest in motorcycling and engineering amongst the pupils, you never know. Our noble hobby could do with a few young riders in the coming years.  Make sure you check it out in 2023!

Some relevant links for your delight: