Slow Progress: Blame the Bug and the Baby!

Unfortunately work on the Sportster has slowed down a lot recently. Contracting the dreaded coronavirus, and then the birth of my lovely daughter have really gotten in the way of precious time spent in the garage! I am still managing to get in there now and again though, so here is what I have been up to…

So what have I done?

Firstly, cutting down the cam cover on the engine. This is a fairly common modification you see on custom Sportsters, and one that I wanted to try. A trick that I use when taking a series of bolts out of a part like this, is to stick them all in a piece of cardboard and simulate the rough positions that they actually sit in. You will thank yourself when you come to put them back in weeks later when any memory of where each bolt fits has long gone. 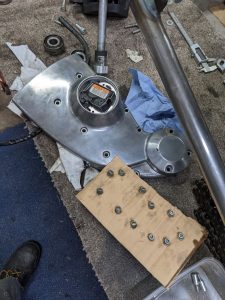 Out with the cardboard and the scissors

Out with the beloved grinder again

With the cover completely separated from the engine, I put some masking tape on it for two reasons; it adds a bit of protection to any parts I don’t want marked and it makes marking up my cutting lines much easier. With that done, I took an angle grinder to it. Once I have got most of the meat off, I used the cutting disc and then a flapper disc to finesse off the finer parts to get the cover into the shape I wanted. Finally I used a file and my trusty cordless die grinder to sand away all of the horrible marks I had made on it. I haven’t decided whether I will paint or polish this cover yet, but for now it’s done. 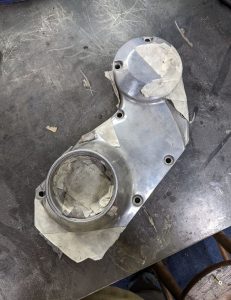 Also you will be pleased to hear, I have finally got my wheels built up. I gave the parts from the original rear wheel, my new wide glide parts for the front wheel, and some Pirelli MT60 RS tyres to Second City Cycles so they could put them together. Some people enjoy having a go at building spoked wheels themselves, but for me I’d rather feel reassured that an experienced expert has done it right. I got the hubs and rims powder coated black, and added chrome spokes. The result was fantastic. I must say I am really pleased with how the wheels look. 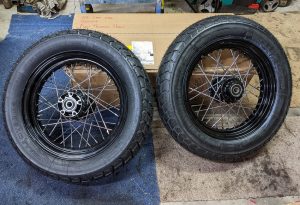 Major landmark of any bike build

The first thing I did was stick them on the bike. For me, getting the wheels on is a critical part of the build (obviously it needs wheels, duh!) as it sets the stance of the bike: |I like to have this in place early as it helps me with making lots of the other parts. This goes back to what I was saying before about making parts that not just fit and look great, but complement the build so the motorcycle looks good as a whole when you stand back to admire it.

Having the wheels on will let me see how the frame sits relative to the ground and therefore if I need to adjust the level of the forks. Other things it influences are stuff you may not even think about, like the angle of the tank or the line of the exhausts, or at what angle I should weld that bracket at, etc. 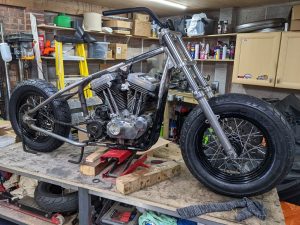 Finally, I just want to ride it now!

For now though, the bike will have to stay on the bench until I make some spacers for the front wheel. Once these are in place I can roll the bike down onto the floor. Then maybe I could even out into the sunlight for a good look round. When building bikes in a confined space (shed, garage, etc) you forget that the motorcycle will often be viewed from much further away. So I think that it is good practice to do this as much as possible. On first glance, the front end looks like it may be sitting a little high. This is not a huge problem: It just means that I will have to lower the front forks slightly to get it sitting nice and level. 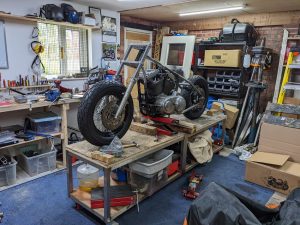 It’s great that I have hit this milestone. However I am already itching to get cracking with the next bit of fabrication. I have bought some fat-bob style tanks that I intend to skinny down and make fit. In addition I have bought all the parts to build my own custom stainless exhaust system. Let the fun begin!

Really looking forward to Part 6! When disease and nappies allow!