Time to see how Tom Shaw is getting on with his Bobber build again:

Now my work in the garage starts to get a little monotonous. I want to clean up the welds from hard tailing the frame, and remove the ugly neck gussets that the factory put on.

Let’s talk tools. Angle grinders are great and have plenty of uses, but I find them a bit cumbersome for some of the finer detailing work I like to do. A lot of it comes down to personal preference, for some people a quick wiz over the frame welds with a flapper disc will be enough, but for me I like to go one step further and really get all of the welds on bike frame clean and tidy. And for this you need something a little more delicate.

I have invested in a Milwaukee M12 die grinder, as it’s small, powerful and battery powered. You could use an air powered die grinder, but then you need a compressor, and therefore space for a compressor, and how often are you actually going to use that compressor and how often will it be sat there taking up precious garage space collecting dust? But it’s down to personal choice, and my choice was a cordless electric power tool. 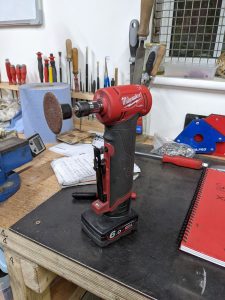 What’s great about die grinders, is that you can get loads of different heads for them. I’ve got a big box full of all sorts of abrasive attachments that I can use to tackle the welds on my frame with, and because they are no bigger than 50mm across, you can get a much lighter touch than the big 115mm angle grinder. It’s only con is its short battery life, so you need to have something else on the go while you wait for the batteries to recharge.

Let’s Talk Gussets. Stop Giggling at the back!!

Removing the neck gussets is a right pain, I have to use a combination of the cutting disc and the flapper disc to tease them away from the frame tubes. And I didn’t do a very good job of it, in some places I was overzealous and cut into the actual frame tubes underneath – more welding for me. 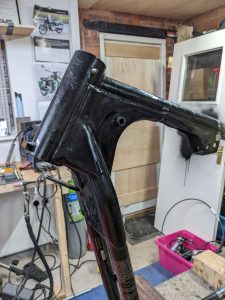 Just ask Mrs Slocombe about Gussets (Those under 45 might have to Google this!)

Eventually though they do come away and I am presented with much more tidying up for my little die grinder. And before you start complaining that these were essential structural frame supports, I will re-strengthen that area of the frame at a later date. The tank and the engine will play a part in how I do it so I am going to park that decision for now. 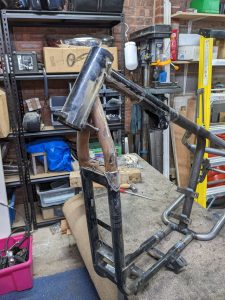 The Devil is in the Detail

Now let’s finish by talking about this sort of work in general. It’s not the glamourous side of customising bikes, it’s not making a cool sissy bar or re-tunnelling a tank. It essentially comes down to how many hours you are willing to put into your build. It’s also what people don’t appreciate when they ask you to make a part for them. Cleaning and tidying things up takes time, it will sap hours and hours from you, and it’s a decision that you have to make for yourself: how much do you really care? I do care, and I like to invest time in the little details which unfortunately slows down my builds. Now it’s worth saying that this doesn’t make me any better than people who leave their welds on show, it’s just down to personal preference. 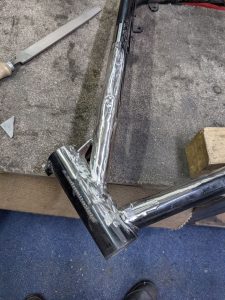 Worth taking the time

Look Closely is the Moral Here

For me when I’m looking at other people’s bikes I notice whether they have cleaned up the welds, or removed that ugly stock bracket. Admittedly it doesn’t make much of a difference to the overall look of a bike when it’s finish, but when I get close to a bike and can see that someone has invested time and thought into tidying up all those little bits it adds up. And I think “wow, what a nicely finished bike”. Have a look next time you are around some custom builds and see if you can spot what I’m blathering on about. 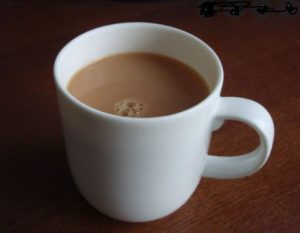 Time for the Traditional Cuppa again…

Back to actual bike work next time I promise!