Next up in our series of  Read Riders Reviews is the BMW R9T. Steve has come to the world of flat twins from the towering competence of the XR1000. He has bought a slower, less well equipped machine with minimal tech. You know what? He absolutely loves it! Read on to find out more…

I first rode a BMW R9T a couple of years ago. It was a bike I had always liked the look of. So when offered a demo ride while my XR1000 was in for a service I jumped at the chance.  What followed was probably the most enjoyable 50 miles riding I’d done in a long time: I just couldn’t get the smile off my face! In fact I didn’t want to go back, it ticked a lot of boxes for me. There and then I vowed that one day I’d have one in the future.

Fast forward two years, we are just coming out of lockdown: I’ve just come back from “another” ride on the XR and just decided: I’m buying a 9T. Don’t get me wrong the XR was all the bike you could ever want; lightening quick, responsive, powerful, blah blah blah. Yeah, it was boring and the 9T had lit something inside me.
So the research started and I decided if I was getting one it had to be the real deal: All the toys, the right paint job, all the bells and whistles. I opted for the original the R9T 719 edition, a brand new 2021 model. Incidentally 719, for those not familiar with the history here, is the code for the custom arm of BMW in the 1950s, . There are cheaper Pure, Urban GS & Scrambler editions also available, but I wanted the full fat original. 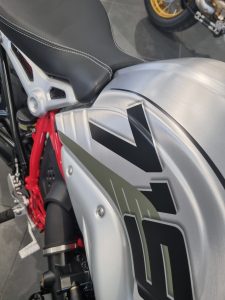 More than the sum of it’s parts

Now for a little history on the R9T: It’s a ‘parts-bin special’ born out of the necessity. About seven years ago, following the world conquering water-cooled GS selling faster than frothy lager at Oktoberfest, BMW found they had a load of air cooled boxer engines kicking about gathering dust. So a light bulb pinged above someone’s  head and they decided to pop all these old air-cooled lumps into to a heritage frame. Then they made it look all cool, retro and cafe racer inspired with no fairings. Add spoked wheels and basic tech, keeping frills and BS to a minimum. Then they sent their latest creation on its way. The public, bike builders and the cafe cool crew loved the inspired old school look of it. BMW had also made it possible to customise the bike almost infinitely. They offer a bolt on back end which means a catalogue of cool parts can be used instead giving each example a very individual look.
Now seven years later with several other models the R9T is now a firmly established mainstay of the Bavarian heritage range. The point is though as much as its beginnings scream afterthought, it really isn’t: The bike is original, real and everything that went into the build looks as though it was put there with a purpose in mind. Well thought out. The 719 isn’t trying to be something else, it isn’t a Triumph Bonneville nor a Ducati Scrambler. It has it’s own identity that others are now racing to copy. I think the 9T looks amazing and the attention to detail is plain to see if you look underneath the skin, the DNA is there to see.

Following a few teething problems,  stemming in the main of a completely incompetent sales assistant I picked it up one cold, wet Saturday morning. I was decked out in a full goretex textile suit ready for the conditions. The ride home wasn’t the romance I remembered from that spring day two years ago. I got home, put the thing away and sat considering if I’d made a mistake.

Then it happened, the following morning the sun was out. The day was cold but dry and I had arranged to meet some fellow members of the IAM. I set off and within a few miles the whole experience changed. The bike was back! It was magical, it was a comedian, it was fantastic. 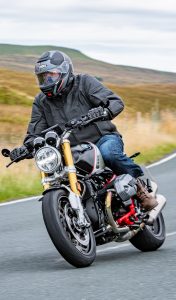 Retro styled clocks with a hint of tech, simple easy to use switchgear, god awful looking mirrors (more later). Its an 1170cc air-cooled flat twin boxer shaft drive and here lies the first bit of quirkiness. On top of all that the exhaust note is amazing, not V-Twin deep grunt but it sings. When stationary if you blip the throttle, depending on where the pistons are in the stroke it pulls you one way or the other, it’s hilarious but in a bend it’ll do the same: Either pull you out or drag you in a bit more to the bend.

Such fun to ride

It is a real hoot to ride. But real genius is that you have have to work at it. You don’t point and squirt, it isn’t blessed with power to paper over the cracks in your riding. So you work the rev range and gearbox (which incidentally is as smooth as butter):  short-shift, jump on the revs, use the engine braking, get is singing. It is planted and sure footed but you have to make it be that, it is an all involving complete pleasure to ride, a scream. This is a brilliant piece of machinery.

Now like I said earlier, it isn’t blessed with tech, flashing lights, TFT screen, bells and whistles as it is a retro bike at heart. Don’t get me wrong there’s some rider aids: ABS, traction control, 3 rider modes and electric engine braking in sport mode for example. I thank the stars for the  heated grips too. Of course all this, and the paint job etc costs extra; it’s a BMW after all!

Since picking it up I’ve added some extras myself, sympathetic to the retro feel of the bike: Luggage, radiator guard, sat-nav. bar end mirrors and some fancy aluminium milled parts. I have also swapped out the tail tidy for something more discreet as the plastic original was reminiscent of a yawning donkey. 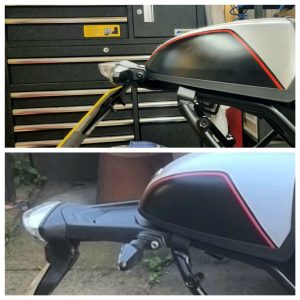 See what I mean about a yawning donkey! 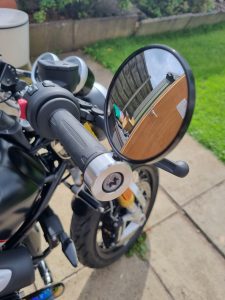 But the bike at heart is the important thing and it is an absolute hoot to ride. Spirited, sometimes hard work, but my god you have fun. It is ultimately customisable so if I ever get sick of the look of the bike, I can make it look completely different. Not that I will because look at her: she’s stunningly beautiful.

Worse, but so much the better for it!

It gets a lot of attention when I’m out as it looks so different, the styling and paintwork is unique, I’ve not seen another like it. The attention to detail, the red frame, the build quality, everything is done right on this bike, built phenomenally well. The engineers in Germany did not miss a trick and built probably (personally speaking) the best bike I have ever ridden based on everything I have just said. 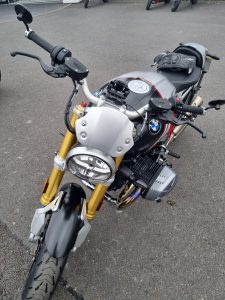 It’s horses for courses, the XR was the do everything bike, quick, comfortable, capable of eating motorway miles and getting down & dirty on the twisties.  However, and here’s my point, it did it all so well, it was soulless, boring, vanilla. The 9T gets me going, it excites me, I want to ride it. It’s not the fastest but you can ride it quick if you work at it, the riding position is comfortable.  I’m 6ft and probably make it look like a small bike but I can ride it all day without the usual back, shoulder, age related issues of other bikes. Definitely a serious consideration if you’re in the market for an uber cool retro looking bike to jump on and have some serious riding fun.

BMW S1000XR….Sensibly Stupid! Is it just too good?

What he does on his days off…

Manchester Blood Bikes – A Few Days in the Saddle…