Subject of the latest Real Rider Review is the KTM 890 Adventure. Stuart Holliday was let loose for a brief blat while 1290was being tinkered with. OK, so he didn’t do any actual adventuring, but it’s an interesting insight nonetheless

ok, before I start the bike review, I need to set the scene and start with a confession: I went to the dealers to get the brakes done on the 1290. I know, I know; I should have done them myself but I’ve got history with brakes and seeing as the bike is my daily transport I thought I was justified.

However, this did give me an opportunity for a test ride on something that I’d been looking forward to for a long time: The KTM890 Adventure. A couple of years ago when I was looking for a replacement for my GS, I was working with a lad whose mate had been working on the launch of the 790 Adventure. He’d been raving about them constantly. So a seed had been planted and this bike had something to live up to. Also, I’d ridden the 790 Duke and that was an absolute riot to ride. So off to the centre of sunny Birmingham I went;

The plan was hand over the 1290 for the pads to be done, quick squizz around the ring road and then out along the A45 dual track. Finally then back through the lanes until I hit the urban area and back to the dealers to collect a bike that actually had some friction material on the pads.

So initial impressions were that it looked great: The pre-requisite substantial slab of orange, the insect eye headlamp and all the other usual KTM adventure styling cues. So it’s off to a good start. 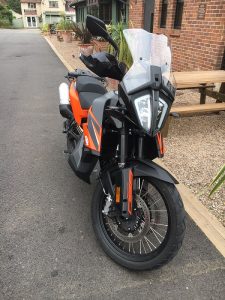 Hopping on reveals it is lower than my 1290. However it had the standard KTM rock hard seat, but a nice clear LCD screen and some nice switch gear. A quick stab of the start button and the parallel twin bursts into life with a very restrained engine note. I was off across the car park and straight into the Friday rush hour traffic of central Birmingham.

No sweat though, the bike is small and skinny (in comparison to the 1290) with plenty of pep, so I cut thru the traffic no problem. Until I hit some road works !! Now usually this wouldn’t be an issue, a bit of judicious filtering and you’re through and on your way. This time they had narrowed the lanes so there was no room. The road works came hard up against the line of cones (so no cheeky rat-runs) which left the only option queue with the car drivers ! 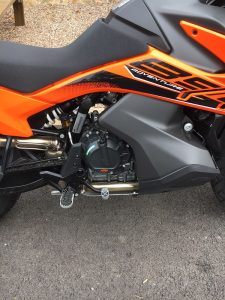 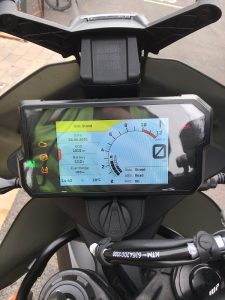 At least the nice telly will keep your mind off it

Thankfully the clutch was light but the bike was definitely struggling in the heat as the rad’ fan was blowing hard: Directly onto my shin !! 20mins to do 2 miles. This  definitely ate into the test ride time sadly.

Finally, I escaped the traffic and gave it some beans off the roundabout. The 890 certainly goes around urban corners ok but it felt a bit lacking as I short shifted through the gearbox. Ok, next set of lights and I thought maybe I needed to use some more throttle (its only a “little twin”) and hold the lower gears. Let’s try again. No, still lacking. Ok, in fairness I have an absolute torque monster in the 1290, but even in comparison to the 790 Duke it just felt a bit flat!

More fun on the Twisties?

Well, that was at mile 4, so the next thing was to see if it would shine in the twisties as time was getting on now. Well, it was ok;  not managing to spit me off, so good news all round. However it didn’t “sing” along the back lanes either. I stopped for a couple of obligatory photo’s and then back to the dealership.

In summary, it was all a bit “meh”…as massive anti-climax. It was fine, but the engine was un-inspirational, the handling unexceptional although the ergonomics and LCD were fine. I can see why KTM dropped the 1050 (too much like the 1290) and the 890 is direct competitor to the 700 Tenere, but it wasn’t floating my boat, The fact is it reminded me too much of the ER-5 I did my DAS on a decade ago. Not good

I was very happy to be back on the 1290, it takes a try on something else to make you realise how epic a bike it is (wasted on me, but still epic), looks like its going to be a keeper for a little while longer.

He enjoyed this one much more:

KTM 790 – Brief Encounters can be the most fun! Riding Impressions and Road Test

A more positive take on the earlier 790

KTM 790 Adventure – All you Actually Need?