The new Yamaha T7 Tenere is very much the darling of the biking press at the moment . One of my old friends, Michael Bell has bought an example. However a certain little bug you may be aware of has stopped him using as much as he originally planned. Nevertheless he still has managed to gain an revealing insight into the bikes capabilities. As ever it’s always great to hear what an owner in the real world thinks of a machine. So over to Michael…

I was so excited when I collected the Tenere, but so far I have only ridden it for 1300 miles. Due, of course, to good old Covid19. My plan for the bike and why I bought the T7 was to use it for an annual 3 month tour. I am lucky enough to be able to undertaken such a trip each year. This year, 2020,  should have seen me riding to the new Yamaha across Central Asia. The plan was to ride through Europe to Turkey, Georgia, Azerbaijan, Kazakhstan, Uzbekistan, Tajikistan and Kyrgyzstan and back. It was going to be epic and I thought from everything that I have read and seen online that the T7 would be perfect for the trip. However to be to be honest, I have not bonded  with the bike at all yet. When compared back to back with my trusty 2015 Tracer 900 on which I have covered over 42,000 miles from new during visits to 30 countries, the old master comes out on top. The Tracer is a better bike in every area bar one; tackling actual trails type riding. To be fair to the T7  I need to undertake a ‘proper’ big tour in order to bond with a bike. Until that happens, I have to admit, the Tracer gets pulled out of the garage first. 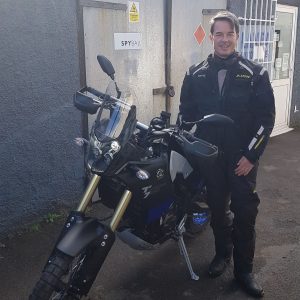 Proud owner on day one…

Everyone on the forums says the Yamaha T7 is best bike ever blah blah blah. But in my opinion it’s too heavy for the dirt and too slow for the road. I am hoping that for the expeditions I have planned, it will be the best bike for my purpose. Consider this; the T7 is a significant  30kg lighter than the much vaunted Honda Africa Twin and (by repute at least) much more reliable than a KTM 790 Adventure. 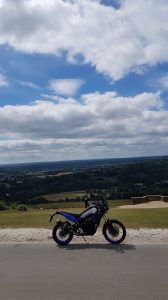 Yes, my Tracer has been great. Now, with all those miles on the clock and bearing a few scars,  it’s not worth selling her. She still runs so smoothly. T7 has been bought for travel as I said, but also to slow me down. Maybe that’s been the hardest thing to get used to? Heavy and low power? On my usual UK rides, it lacks the thrill of my Tracer. Riding with mates, it’s too slow. Tracer is still the best when it comes to thrills and fun. T7 is for adventure travel and fun I guess. The Tenere still feels a bit awkward with the 21 inch front wheel and towering 875mm seat height. Psychologically it’s still ‘new bike’ precious too, and I don’t feel comfortable just hacking about on it no matter what the conditions. Going forward I still need to get the seat on the T7 sorted to my tastes and upgrade the front and rear springs for my weight. Riding her daily on tour will cement the relationship I am quite sure. More in the next thrilling episode!

Real Riders takes on some of the rivals…

KTM 790 Adventure – All you Actually Need?

Maybe something a bit more simple?

Royal Enfield Himalayan – Rugged, simple, affordable. What is not to like?

Recently updated but worth consideration?