Another ‘real-world’ review by an experienced biker, this time my old friend Paul is trying out the new KTM790 Adventure while his own 990 was in dock for a service

I don’t often get the chance to ride different bikes – in fact I haven’t ridden that many in total – so when I was offered the option of a courtesy bike while my KTM 990 SM-T was being serviced I jumped at it.
Standing in the KTM dealer I was asked “are you just planning on riding it home?”. Given that this was the weekend and the weather report was for a mini-heatwave I responded “well, I was planning to spend some time enjoying it”. He thought about it for a moment and then offered “790 Adventure OK?”. “Sounds good”. 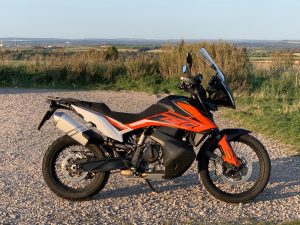 First impressions: it’s smaller than I was expecting with a notably lower seat height than mine. It carries a lot of weight – both literally and visually – low down at the front, with the fuel tank sitting in front of the rider’s feet on either side. I’m not a huge fan of KTM’s current design around the headlight but this one is no worse than inoffensive and the side profile is pleasing enough. Swinging a leg over it I find the seat is long and towards the rear, where I typically sit, pretty wide and flat. This makes reaching the ground a little less easy, even with the lower height. 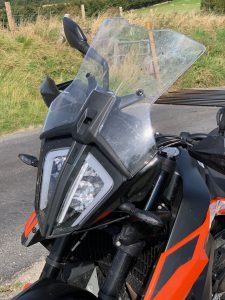 Not the prettiest face, but distinctive

Turning the key lights up the dashboard – here things get much better. The bright TFT instrument panel is clear and easy to read with a range of useful and configurable information on it. The user interface is intuitive through the controls on the left bar and there’s plenty to play with including Bluetooth connection to phone, headset and satnav – sadly I don’t explore these options. 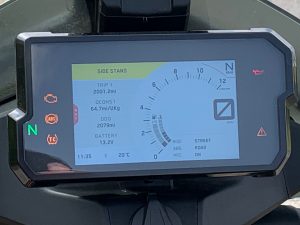 Bright TFT dash is visible in all conditions

Thumb the button and it starts immediately, settling into a pathetic whimper. It’s on the stock silencer of course, but then so is mine – this just sounds pitiful. I remind myself it’s a 799cc parallel-twin compared to my 999cc V-twin and it is muted with emissions controls.
The ride home from the dealer is around 11 miles of suburban and dual carriageway roads and… I’m disappointed. It claims 95 bhp and 65 lb-ft so ought to get going well, but it feels a bit slow and ponderous. No doubt the 21” front and 18” rear wheels rob it of the agility I am used to in favour of off-road performance. However the suspension is pretty firm at the rear, which is more road-biased. The brakes are good and include cornering ABS but take a handful at the front and the unadjustable fork dives deeply. My disenchantment with the bike is probably also due in part to the way it is physically set up – the front brake lever is way too high as is the gear lever, meaning the controls need a conscious and concerted effort to engage.
Once at home the tools come out. The gear lever is easily adjusted – loosen the two locknuts either end of the linkage, spin the linkage to raise or lower the lever, then tighten the nuts again. The brake lever is a bit more involved – two bolts loosen the clamp on the bar but the reservoir and cables foul the handguard, meaning this also has to be loosened and repositioned. Spending a bit of time up close and personal reveals a well-made and nicely finished machine. And now, having made it fit, I take it out for a proper session.

It’s mid-September and the Indian summer is in full swing. I plot a vague route in my head around the North Wessex Downs, using some of my favourite local roads in order to give it the best chance of redeeming itself. Over the next couple of hours that’s exactly what it does. It turns outI had been riding it wrong – where mine grunts out low-down torque this oneloves to rev, and this is where it comes alive. Above 6,000 rpm it picks up and goes, accompanied by a satisfying soundtrack. Rolling on at low revs generates some shuddering but it picks up cleanly enough. Tipping into corners needs a bit of effort but in the corner it is unshakeable. The suspension is still a bit of a compromise, with the front bobbing and diving and the firm rear occasionally kicking me out of the seat but for the most part it is planted and stable.
One thing this bike does very well is the gearbox. Now that the lever is an easy reach for my road boot it snicks up and down slickly. It also has a quickshifter – an optional extra I believe – which works very well and I want one. The gear position indicator is useful and I don’t realise how much I looked at it until I get back on my bike where it is missing.
Looking at it more practically it has a two-piece seat but there’s pretty much no space for storage (a toolkit is included). The pillion seat is decent and the grab handles large and solid. There is a small rack on the back which will no doubt accept something suitably boxy and aluminium. One big issue for me is the missing centre stand – not only does this make simple tasks like chain oiling and wheel removal easy – something you’d think an ‘adventure’ bike would need regularly – but it also means that the bike takes up a lot of space in my garage. It’s a wide bike anyway with the low down fuel tank and wide bars, but leaning on its sidestand it gets in the way more than it should.The dashboard was registering an impressive 65-ish mpg, which would deliver around 280 miles from the 20 litre tank – I can’t say I believe this as the last couple of bars on the fuel gauge disappeared alarmingly quickly. The screen sits in two positions – adjusted by removal and refitting – and both levels were bearable, if not especially quiet.

Summarising my weekend with the 790, I did enjoy it and the bike did everything I expected of it. I didn’t go any further offroad than a gravel car park so can’t comment on that side of its capability but as a road bike it makes a decent enough case for itself. Did I like it? Yes, I think I did. Would I have one? No, I don’t think I would but I can see why someone after a middleweight bike to cover distance, have a bit of fun, commute to work and tackle some light greenlaning would. One thing it did do though is put my bike into context; the ride home on my freshly-serviced SM-T was a joy and the 790 helped me recognise that.

Thanks to Paul Beasley for the words and images