It’s amazing what a motorcycle can do: I don’t mean the way it performs, stops, corners or even how comfortable it is. No, the real magic is how it can make you feel: How it can melt away your troubles.  Genuinely I cannot think of another machine that can connect with you in such an emotive way

I encountered a perfect example of this phenomenon a couple of weeks ago: I was lucky enough to be trusted with a friends immaculate 1991 Kawasaki KR1S. This is an iconic 2-stroke sports bike was pretty much at the high-water mark of the 2-stroke motorcycle sports bike. Alongside the likes of the RGV Suzuki, later TZRs and the RS Aprillia 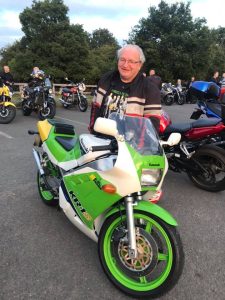 The smile says it all!

Today the light weight, small capacity sports bike is an extinct breed, at least as a new bike. However right through the 1970’s, 80’s and 90’s this class was the natural home of the true hard-core nutcase. Those who just wanted to ride a bike to the max everywhere, ALL the time. The remnants of this breed now either confine themselves to track days or ride GSXRs these days

I was one of those nutters: I wore my badges of honour with pride. My riding gear consisted of jeans, trainers, paddock jacket and a cheap lid. We couldn’t all afford a Simpson you know!

But that was many moons ago. Times changes, things move on, and waistlines expand! Today I ride a very capable, but slightly sombre BMW R1200RS. So, would the diminutive Kawasaki seem like silly plaything? 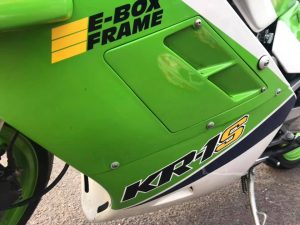 Does it shatter my illusions?

Well, I am absolutely delighted to report that it absolutely is a silly plaything! Man, I only rode it for a few miles but right from the off I was transported back in time. The second the whiff of two stroke hit my nostrils I was 19 again! The bike was already warm so when I pulled out the car park it was down to business straight away. The revs climbed then suddenly the note hardened and the needle took off around the tachometer.

I furiously grabbed gear after gear as the speed climbed. The Kwak speared along the country lanes with the hedgerows turning to a blur and every dawdling car screamed past, left for dead to smell the whiff of 2 stroke oil hanging in the air! How can just 60bhp be this much fun?

I went through a series of sweeping bends and the KR just sliced through them seemingly by the power of thought alone! So light, so manageable. You just need to keep it on the pipe and then it rewards you in spades. We dived into an island, blipping down the gears like I was a racer competing in the NW200. The twin discs only have to deal with 130kg. I’ll ignore my contribution to our combined weight here! So right now all the modern fripperies like ABS just seem an irrelevance. 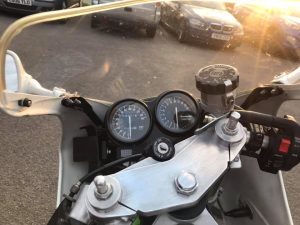 All you need in truth

The engine burbled as I leaned the bike right over and flick flacked side to side to come out the island, still on the lean and screaming up through the box. This is pure un-cut pleasure, straight to the essence of what a sports bike is about. Have we allowed ourselves to be consumed in bullshit in recent years? Lost the purity of bikes like the KR? Perhaps we have

Back Safe and Sound

I returned to the car park and the bikes nervous owner. I think my smile said it all. What a bike. I was an RD Yamaha man back in the day, but hey a two stroke is a two stroke! My friend has done a lovely job of restoring this 1991 example. Perfectly standard with less than 10,000 miles on the clock. You could be in a Kawasaki show room with Nirvana tracks booming from the workshop Ghetto Blaster.

The bike is a credit to its owner and I am so grateful to have been given such an opportunity to go back in time! I’ll say this: The KR1S is a more fun way to time ravel than a DeLorean!

My adventures on a RD250LC

Blasts From my Past – Yamaha RD250LC – Autumnal Adventures

For those who want to read about the nuts and bolts: