Another one of our Real Riders Review and this time it is the Mutt Mastiff 125 that is coming under the spotlight. The Mutt is the comeback bike for Bill Voyce, who is a like a prodigal son returning to biking after a break of many years. Quite a common thread in modern motorcycling.  He wanted to get back into things reasonably gently, but still have a stylish bike. His choice was the Mutt Mastiff 125. Let’s see how he has got on:

The Mutt Mastiff is the motorcycle I would have drawn on the inside cover of my school exercise books when I was sixteen.  To put that in to context, it would have been in 1980, whilst I was riding a 50cc Yamaha FS1E. Then I graduating to an air-cooled Yamaha RD200. These were days when you could still ride bikes up to 250cc on L plates.   When I look back I have to admire these two bikes, small but perfectly formed Japanese offerings: Both of them were totally reliable and fast for their size.  It was Gotterdammerung for the British motorcycle industry at that point in time. All the big names such BSA, Norton and Triumph were in trouble.

Time to go British before it was too late!

I desperately wanted a British bike before it was too late.  So I managed to get hold of a BSA Starfire, a 250cc single cylinder machine. To me it looked like the legendary Goldstar. Of course it didn’t really, but it was close enough. The Starfire allowed me experienced all the characteristics of a ‘real’ motorcycle.  Refusal to start, leaking oil, blown gaskets and a main beam that had all the power of a candle in a stiff breeze.  I was still on an L plate when I scraped together enough money to buy a Honda CB250N Superdream and reluctantly let go of the BSA.  Anonymous and sluggish the 250N was the bike that eased me out of two wheeled transport: I happily sold it to finance my first car without completing my full bike test. 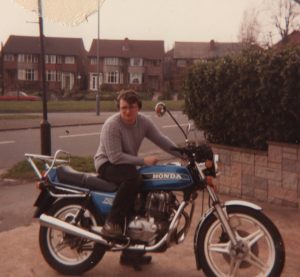 Honda CB250N Superdream. So exciting he bought a car!

Fast forward to last year and my slightly late mid-life crisis. At 57 years old I decided to get back on the saddle. But first I had to get my licence, and that meant a 125.  My son suggested I look at Mutts and I was on their website for only a few minutes when the Mastiff caught my eye. The Mastiff was the machine my gaze kept returning to. I felt myself falling in love, and as I didn’t intend on keeping the learner bike for too long, I didn’t want to invest in a top spec’ Japanese motorcycle.  I wanted something earthier, a ride that felt more authentic, and looked British.  I didn’t for one-minute swallow the Black Country metal manifesto on the website, and I immediately spotted the bike had a licence- built Suzuki GN motor at its heart.  I suspect most of the ‘custom’ parts that form its clever styling, are probably squeezed out in some far eastern factory to, but it just looked the part.

It’s an imposing bike, with its voluptuous 17 litre tank, topped with a Monza style cap and resplendent in its mat-black and silver livery.  It chugs along on wide black rims dressed in fat, knobbly tyres which are surprisingly good in all conditions.  Dotted about the conventional twin shock frame are nice brushed aluminium details, like its chunky sump guard and a brake cylinder housing.  I can’t find a bad weld on mine, and the finish on all the parts is excellent, with nice details on the engine covers, CNC bolt heads and fork yolks.  I particularly like the brown, diamond pattern seat (complete with a Mutt stamp) and its matching grips.  The chip basket headlamp grill and bullet indicators finish off the stripped-down sixties look.  It sounds the part too, the brushed stainless steel exhaust system being tuned to grumble just right 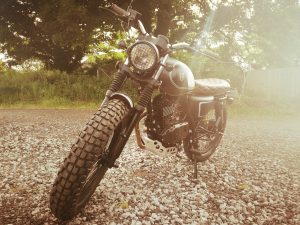 The Mastiff certainly looks the part

That slim seat is comfortable enough, but the stiff rear shocks and slightly soft front forks only provide enough comfort for an hour’s journey.  Any great distance will require several comfort breaks and one of the popular items on the forums is, ‘How do I change my shocks for ones that work?’.  It was clear to me from the outset, that it’s not a bike designed for touring.  The single cylinder power unit vibrates too much for that.

Don’t get me wrong, that little engine is a marvel, and it does what’s asked of it.  At that size I can’t think of a better choice for a reasonably priced learner machine. However it’s really at home in an urban environment.  The Mutt is a street bike and it lives up to its brochure image: Here it’s blasting around the ring-road, or eating up the streets of town in fourth gear.  Put on your Bell classic, climb in to your lace-up boots and slip on your trucker jacket: This is your bike.  Your hipster pals will probably have Mongrels or Fat Sabbaths, but you are the sensible one that rides a Mastiff, king of the Mutts. Rev it hard, be gentle with the gears and off you go, beating most cars out of the lights. Even if they do soon catch up. 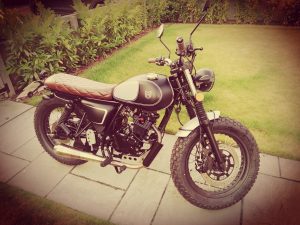 Squint a bit and it could be a BSA Starfire

Speed records are not under threat…

With only 12 hp, it’s not a fast machine, and the claimed top speed of 70 mph is terribly optimistic.  Down-hill, with a wind behind you, bent over the tank, you might reach 65. However most of the owners I’ve spoken to can never coax a Mastiff past 60 under normal conditions.  Its turning circle isn’t tight, though it corners well and you can lean in to bends with confidence. The Mastiff will respond happily to the subtle movements of your body to alter line.  Once you find the sweet spot on the throttle, the whole dynamic of the bike comes together: You can dream you’re on a bigger machine.  With a tank that size, and a fuel consumption averaging 70 mpg, I can cover over 300 miles between fill ups.

If only only Mutt had been BSA!

Even with an L plate, it attracts the attention of bikers on meatier machines, especially Triumph owners who will come over and give it an admiring glance and start a conversation.  I am very happy with it, and I prefer the sit-up riding position to the Z125 I used to complete my CBT.  I can’t help thinking if this had been the state of play with British machines in 1980, and this had been my Starfire, I would already have my full licence.  I might even still have that Starfire!