Back in the midst’s of time (1990) I wobbled out into the Suffolk countryside to ride a Royal Enfield Bullet. Not one built in sunny Redditch but one from the Raj: India. Here production had continued since 1950’s utterly oblivious to the collapse of the famous British marque in 1971. The one I rode boasted the 500cc ‘big bore’ engine. Most of those built were the ‘cooking’ 350cc edition. The gentle plodding four stroke single was a stark contrast to the bike I was riding at the time: A frenetic two stroke Yamaha RD350F2 YPVS. But despite the modest performance of the Enfield, a seeming absence of brakes and somewhat vibratory nature I really liked the old tub. It was very much a 1950’s bike caught in some sort of weird time loop.

Remarkably you can still get 500 Bullets brand new today. While they have been thoroughly re-engineered over the years and now boast features such as electric starters, fuel injection and disc brakes the bloodline remains very clear.

A proud name with a long history

Recently though there have been big changes at RE and they have even opened a state of the art R&D centre in the UK. The first really significantly model to emerge from there is the 650 Interceptor. Hence why you can consider this bike as more than a little ‘British Beef’ . Interceptor is a proud name with a long history from RE’s past and the bike is very traditional in style. However appearances can be deceptive; the Interceptor is in fact brand new from stem to stern and boasts such modern tech as ABS.

The new machine has been receiving rave reviews all over the web, including a lengthy piece from Jay Leno of all people, who seemed to absolutely love it.  So it was understandable anticipation I hopped aboard QB Motorcycles demo bike and headed off into the countryside to see what all the fuss was about. I was also keen to see if I had potential replacement for my 550 Kawasaki on my hands 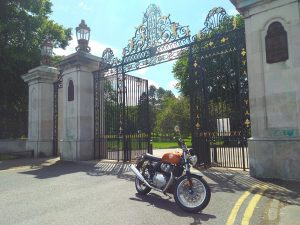 The Royal Enfield in a suitably Regal Setting

Initial impressions are positive and while looks are subjective I think the Interceptor is a good looking beast, especially in the bronze finish of my demonstrator.  OK, it is clearly harking back to the 50’s and 60’s, but it does it damn well! Up close the positives continue with the fit and finish looking pretty good and the paint deep an lustrous. Once aboard the narrow, firm seat immediately makes an impression, but the low seat height is welcome and the riding positions feels comfortable and ‘natural’. Thumbing the starter button brings the 650 air-cooled engine to life accompanied by a throaty roar from the exhausts. The 270º crank angle of the parallel twin gives the engine a note more akin to a pulsing v twin and is all the better for that.  Then in with the very light clutch, snick into first and away we go

Initially I battled through the traffic in the ‘Black Country’ and here the RE was nimble and easy to punt through traffic and negotiate junctions and tight islands that characterise the area. Then you break out into open countryside as the A458 carries us towards Bridgnorth. This is a surprisingly decent little road with a mix of bends and long plunging straights to challenge the bike. I have to say the RE is very well matched to this sort of running, it feels like its natural environment….not super fast, but fun to ride briskly riding on the bikes surprisingly ample torque.

Not fast, but still enjoyable

Don’t get me wrong this is not a fast bike, with only 47bhp how could it be? But it is fun and when you just want to stoke the bike along and enjoy your surroundings it is just about perfect. The clutch is super light too. The six speed box is slick changing and the suspension is ok if you don’t ask too much of it. Just enjoy the bike for what it is. The simple clocks keep track of revs and speed and the bike harks back to simpler, possibly happier days.

As you can tell I really liked it. I pulled up on the local bikers cafe on the outskirts of Bridgnorth and ordered a big mug of tea with a bacon buttie. This just seemed the natural thing to do. The bike drew a lot of admiring glances and I think that I could have sold it twice on the spot! 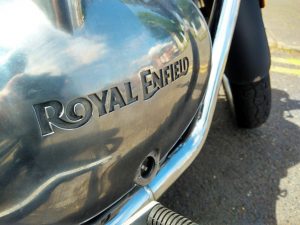 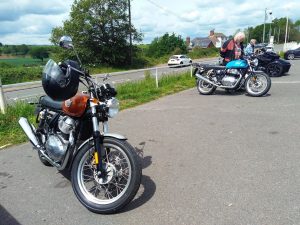 The bike in what could be it’s natural environment: A cafe next to a rural A road. The Blue Continental GT in the background is the sportier sister model to the Interceptor. The owner had just picked it from QB and absolutely was absolutely loving it so far 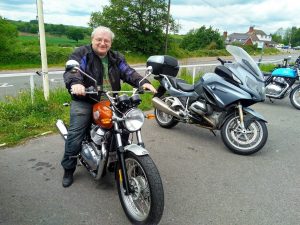 The smile says it all…

Tea drunk and bacon consumed I headed back to the dealers back along the A458 this time in company with a couple of friends on a BMW R1200GS . The next few miles were simply a lovely ride on a stylish, fun motorbike. The only real negative for me was the narrow hard seat. Were all the positive reviews right? I have to say they were. Have I found a replacement for my 550 Kawasaki? At £5400 it is a hell a lot of bike for the money and a 3 year warranty too. I have some thinking to do….

The RE Himalayan is also an excellent bike…read about it here….

Royal Enfield Himalayan – Rugged, simple, affordable. What is not to like?