Stu, our new roving reporter had the keys to a NC750 last week. This is his humorous take on the super sensible Honda…

It’s funny how things in life circle back to you: Eight years ago I was sat in a Honda dealers with my freshly signed Mod 2 pass certificate. No going home to the wife and kids to celebrate my new found skill: Straight to the local bike dealers like any sane person and tried to organise a test ride. Disappointingly but not unsurprisingly, they don’t let newbies out on demo bikes. By the time the date of the arranged escorted test ride had come round I’d already had a pillion ride on a Triumph Tiger, order was made, deposit placed and bike on its way, so I never got to ride one.

Finally in the saddle

So, when a mid-schedule  preventative oil change plan was made for the KTM  the only loan bike the dealer could offer was a NC750 from their sister Honda franchise. This gave me my first opportunity to ride one and to see whether I made the right choice all those years ago. 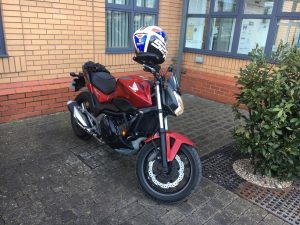 Now, I had to manage my expectations of this bike. Consider that it’s half the price of my KTM1290, designed for commuting, being sensible and practical. The very polar opposite to the KTM. The 1290 is like riding a ferocious tiger, whilst twisting his balls: You know its going to be a hell of a ride and as long as you keep a tight hold you “should” be ok. However, loosen your grip and you know that you’re going to be flung off and mauled savagely.

The Honda? Well, its like riding a guinea pig,  even if its a Peruvian Killer Zombie Guinea Pig, it’s still a guinea pig. So, I am standing there looking down on the restrained burgundy fuel tank,  massive key and the tiny LCD screen, I thumb the starter and awaiting the roar of my Peruvian friend.

I am greeted by a quiet thrum from the 750cc twin engine. As I push it back from its parking spot notice its smooth running and light weight. I hop on and appreciate the saddle is low, but a a sensible shape. I kick up the stand, stamp it into gear and I’m off across the car-park.

Now snicking into second gear takes some effort. Turns out I cant get my adventure style boot between the peg and the lever. Well, either the boot or my ankle isn’t flexible enough. So I move the lever with the inside edge of my boot and I waft along on a wave of torque. However only a small wave; think of one that laps at your ankles rather an Hawaiian ‘Rip-Curl and you’re getting there…

Out into the traffic of Coventry “City of Culture”  and no, I still cant get over that statement either! It may not exactly be the Arc D’Triumph, but the Cov ring road is proper dog eat dog territory! Or should I say Guinea pig, eat Guinea Pig? I digress: The next obstacle is a busy roundabout, turns out there isn’t much grip as the front end washes out as I try to keep the power on and then I’m off down the dual carriage way back to work. Progress is acceptable, we’re doing the national  speed limit without any bother. Chugging along in 6th.

LCD screen is clear, as is the view from the mirrors, seat’s comfy, brakes work too when required. It’s all very uneventful. Back at work, I park-up, engage the steering lock (its a £500 excess on the dealers insurance) and walk to my desk without looking back. I think that says enough !

The skins of rice puddings need not fear

The run back to the dealers in spring afternoon sunshine is a similar event. Mind you I noticed that LCD screen is actually colour! Additionally it boasts a mpg read out as default. I did take the opportunity to open it up on the dual carriage way. The NC reached a heady 77mph with a bit of pushing: My 1290 KTM was going much quicker on the way to the dealers in the morning on the same stretch without any effort whatsoever. 60 seems to be the natural speed for the well mannered Honda.

At this speed, I had time to ponder on the market this bike is aimed for. Obviously commuters are the prime target: With its great mpg and the tank that is actually a storage compartment. However it is all a little characterless.  I think I would happily sacrifice a bit of mpg for some soul/style

I suppose there is the challenge of trying to make a slow bike ride fast. Perhaps you could indulge your masochistic tendencies and see how you could continually improve the mpg. This is not what biking is about for me ! Perhaps the NC750 for those guys who need their daily bike fix: Those who have a garage full of exciting bikes for their adrenaline fix or to keep as garage queens. Again not for me. I’ll stick with my big, angry orange tiger.

Worthy, but not for me

In summary, I am sure that this is a very competent machine for a very specific market/user. A bike that will give many years of faultless service. However the NC750 is  just not for me. I’ll stick with my over-priced, gas-guzzling, slightly fragile European product that raises a smile every time I ride it.