Well I have finally achieved one of my biking dreams: I have ridden a Benelli!  OK, so was it a fabulous 750 or 900 Sei? A six cylinder bike available years before the Honda CBX or Kawasaki Z1300? No. OK, Ok was it the snappy, nippy  2-stroke 2C from the 1970’s?  The Italian take on the legendary Yamaha RD ‘air-cooled’. Errr…no. Oh alright then was it the Tornado? The glorious wailing triple featuring super cool twin fans sticking out the back? Errr…no. So I must have been riding the explosive 1130cc TNT? Again no, but you are getting warmer! TNT is correct! It was in fact the little 125 TNT, and here is the crucial bit…was it fun? Oh yes! 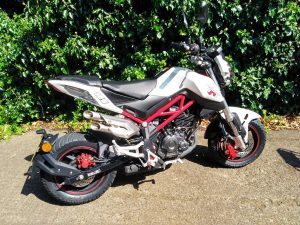 A friend of mine, who generally rides a stonking great Harley Davidson or a Ducati has decided it was time he had a little contrast in his bike fleet, so as a counterpoint to his mighty V twins he has treated himself to a brand new little 125 TNT and was good enough to give me a go. I was smiling before I even got on…the styling is a scaled down tribute to a MV Agusta 1090RR  Brutale. Right down to the twin, stacked single-sided  pipes! I leapt aboard and revealed in the fact I wasn’t on tip-toes for once and roared off around Stourport-on-Severn to enjoy myself. What a little ‘fun-bus’ the ‘Baby Brutale’ is. Not only that but I found it to be surprisingly comfortable.

In performance terms the TNT goes as well as any modern four stroke 125cc bike can do. All the controls were slick and light to use as you’d expect. You could chuck it about with aplomb and really brings out the naughty teenager in you. Well that’s my excuse and I am sticking to it! The cornering is a good match for the performance on offer. The brakes were more than up to the jib too.  Combining all this together and I have to say I loved my little jaunt on ‘The Baby Brutale’.  At £2400 (2019 price) they are not stupidly expensive either. Would I want to have one as my main bike. As a somewhat overweight 55 year old, probably not, but it would make a cracking second bike!

Before you moan about it how plays the Italian card but is in fact made in China. Your Pizza from Morrisons wasn’t baked in Mamma’s stone oven either ! In spirit it is very much Italian and all the better for it. Also if was made in the home of the Pope it would also be twice the price!

In summary, as the old saying goes ‘Small Ones are more Juicy!”

If you want one try Readspeed in Stourport on Severn….