Well as autumn draws to a close, the clocks go back and the nights get ever longer biking can be a bit less appealing. However the cold, damp and dark doesn’t mean the fun for 2022 is completely over. Thanks to Facebook I clocked that Museum Live was going on last weekend at the wonderful National Motorcycle Museum

The event is effectively an open day for the NMCM and entry on the day is free!  I arranged to meet my old mate Andy there and we managed to roll up pretty much simultaneously despite minimal planning. It was free to park your bike, but car drivers were paying £15. So be aware of that if you go next year. The area was allocated to bikes was filling rapidly. Chatting to those parked around us it was clear people had travelled good distances to get here. Fair play to them on a day when the storm clouds were looming overhead. 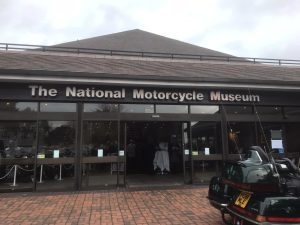 A superb collection of the finest British motorcycles

To add to the fun, Henry Cole and his entourage were there too. They were doing a meet and greet in the foyer, and later did two one-hour slots on the stage in the Britannia Suite, giving an amusing talk and Q&A session. Henry Cole dominated but it was great to see Sam Lovegrove and Allen Millyard too. TT hero Peter  Hickman joined them on stage and the banter flowed freely as Steve Plater hosted an enjoyable show. They even fired up the Millyard built V10 Viper bike at the end. The Z1 Kwak they have been restoring on The Motorcycle Show was revealed too, although that was in the afternoon ‘performance’  and I missed it! 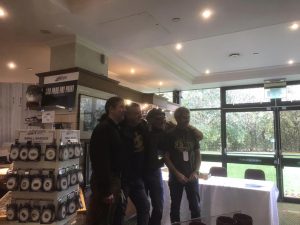 Henry, Sam and Allen meeting the great unwashed. Not my greatest photo to be honest, but you get the vibe! 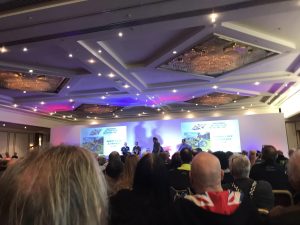 Mr Cole & Co. charmed a large and  appreciative crowd in The Britannia Suite

Henry Cole may divide opinion in the biking community, but I think he is doing great work bringing the joy of motorcycling to a more mainstream audience. Judging by the aging demographic of our biking world, we certainly need some new blood to keep things going in the future. Go to any bike event and there is grey hair everywhere!

The talk given by photographer Rachael Clegg about her work was excellent too. She takes witty, well composed shots of herself in spots significant to motorsport history, particularly on the IoM TT course. She is quite a character and her work is well worth checking out.

Our morning session was rounded off with a procession of bikes being wheeled on to the stage and actually fired up: The two-stroke CR700 followed by the genuinely ear splitting, whaling racing Honda RE162 250 replica. This bit certainly emphasised the ‘LIVE’ nature of the event. The smoke coming from under the seat of the late great Dave Jeffries TAS Suzuki GSXR was a little alarming though. That was hurriedly wheeled outside! I was surprised they were allowed to fire the bikes up inside, but it was great to see and hear!

First time in a decade

I have not been to the museum since 2012, so it was a real pleasure to tour the five halls of immaculately presented British motorcycling history again. There is so much more to it than just BSA, Norton, Triumph etc. So many brands and stunning bikes. I can’t list all the bikes that took my eye, it would run to pages! But I did like the Indian New York Police Dept. bike. Looked all American, but was in fact a Royal Enfield underneath it all. 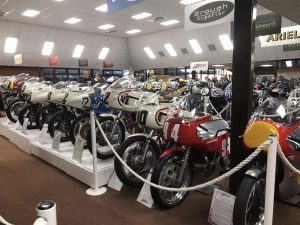 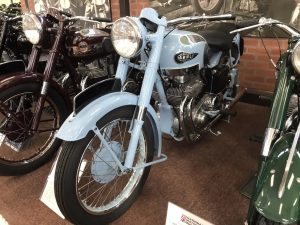 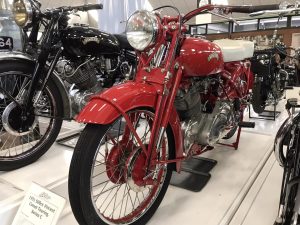 I was particularly interested in the prototype bikes from the 1960’s and 1970’s. The Norton Wulf, a proposed four cylinder Triumph, the pretty little 350 four stroke twins. Oh what could have been! With a little foresight the 1970s and 1980s could have been so different for our bike industry. 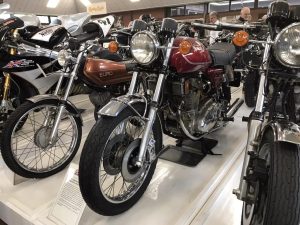 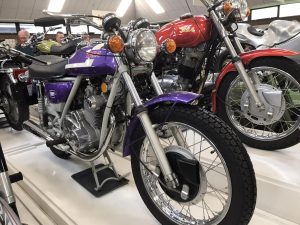 The racing Norton rotaries, a line of Police bikes plus rows of gleaming AJs, Velocettes, Vincent etc. Then the myriad of less famous brands. The array of bikes is simply breath-taking. Get yourself over there if you have never been. Truly the variety is eye popping.

Museum pieces we used to own

However it is getting annoying how often bikes we used to own and run are now in a museum. It was my friend’s turn today. A 1995 Triumph Tiger, all but identical to the one he used to run, was in line up of Hinckley Triumphs 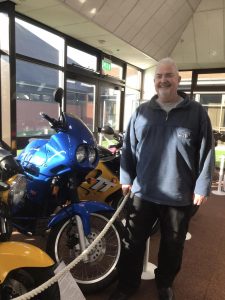 Our bikes are turning up in museums!

The food hall was spacious and the prices not outrageous for an event like this. The ‘Light-Salad’ roll was excellent and the huge burger consumed by my companion for the day looked good too…

The trade area was interesting too:  Resurgent Royal Enfield had a stand manned by the top lads from QB Motorcycles. The new BSA was there too, I had a sit on one and it does fit me rather well. Is my Ducati Scrambler on a sticky wicket? We shall see once I have had a run on a demo bike. 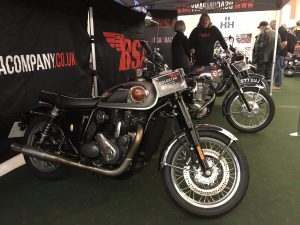 Also good to see the stunning Langen, a rather beautifully engineered two-stroke being made in the UK to order. Apparently all the production has been allocated already. Damn! Midlife Classics, a local dealership to me were showing the Herald Brute 500. While it does have a Chinese engine, the bike has been designed, manufactured and assembled in the UK. On top of the reborn (again) Norton and the thriving Triumph this really good to see. Britain is back it would seem! 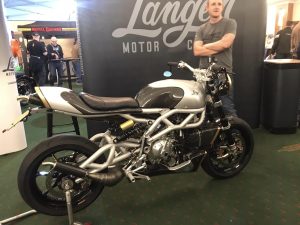 This is a work of art! The all British Langen!

Anyway I rode home on my BMW a happy boy and even managed to doge the storms. Put this event in your diary for 2023 folks! In the meantime perhaps it’s time I finally bought a British bike?