For the latest of our Real Rider Reviews, we’re back with Stuart Holliday. He persuaded the good people at KTM to let him out to play on a shiny new demo bike!

Out on a new Adventure

So, there I was casually scrolling through Facebook as you do. I was looking at motorbikes, old cars, scuba gear, watches. Then I spot an advert for the “KTM Adventure Tour”. With my interest suitably piqued, I click the link and have a scroll through the venues. Ooh, there’s one locally and only 15miles away! Even better, it’s at end of a nice twiddly road that boasts a café!

I’d best hit the “book” button and hope that I get selected!! I didn’t read any more blurb because I didn’t think there was much chance of getting a slot. I assumed that it would be a trial of either the new 21MY KTM 1290 Super Adventure S with its new fuel tank strategy and longer swing arm, the Super Adventure R which would be an interesting comparison between the semi active suspension verse the off-road biased suspension or perhaps maybe the 890 Adventure. In the case of the latter, it would hopefully give me a chance to have a positive road test instead of the disappointing one previously.

I got the road test!

So, the July day arrives: The weather is slightly over-cast and a bit damp underfoot. With a little trepidation and off I trundle in the early morning. I was being a little more attentive to the features of my current 1290 SAS so that I can make a more informed comparison: I might have tried a little harder than usual in the bends instead of my usual steady commuting style. However, it was clearly for comparison purposes only rather than me being a bit more of a hooligan and enjoying myself! I arrive at the café to a sight of two rows of brand spanking new 1290 SAS’s glistening in the morning sun in either black or orange flavours. A variety of customer bikes parked opposite. To my surprise not many were KTM models. 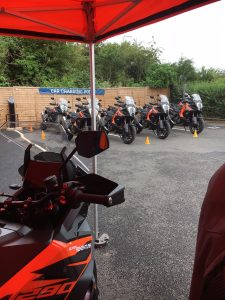 Whilst waiting for the rest of the invitees, there’s a chance to look over the new model and see where its different/similar to my current bike. Clearly, the tank has changed, it has adopted the “saddle bags” design from the 890 where the tank extends lower for better weight distribution. It will be interesting to if I can tell the difference. The new ACC module underneath the lamps, new switches (thankfully, the current ones I’d first seen previously on the 15MY SAS I test rode before buying my GS) and a 1 piece exhaust can. This is an improvement over my current example where the end caps start to rust!

Carry on, carry on

Other than that, there’s clearly a large amount of carryover content. I don’t see this as a bad thing to be honest.  With a full contingent of test riders, the event starts with a quick briefing: A run-through of the basic controls of the bikes, the improved LCD screen and menus (ooh fancy) and clearly what for KTM is a massive USP – the Automatic Cruise Control. Once this was completed, it’s a restrained Le Mans style departure behind the event lead rider off into a fine mist of drizzle. 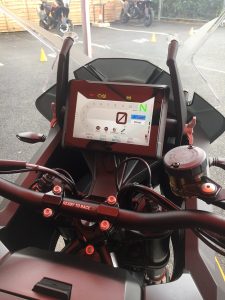 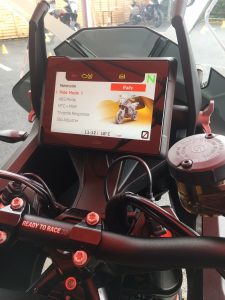 Anybody off to Dakar?

First impression is that the low speed fuelling is much improved, not lurching between ignition strokes that my current one suffers with if you don’t slip the clutch at low rpm and the shock horror!! The standard seat is reasonably comfortable, unlike the ‘wooden plank’ the 18MY comes with from the factory. The engine still remains strong and bike feels similarly manoeuvrable to my current bike, but as we are heading through some of darkest bits of Warwickshire’s smaller back roads I’m very mindful that a slippery road, 160bhp and newish tyres aren’t the best combo, so a little restraint is required. 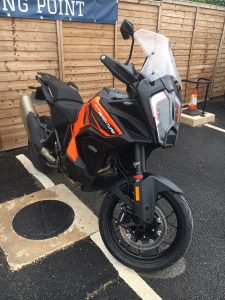 Is it orange with black bits or black with orange bits?

Time for a cruise

At the 20min mark, the lead rider pulls over into a large garage forecourt for a quick check over with everyone. He also reminds us that the next 20mins is the chance to try out the ACC. To be honest, I have Cruise Control on my current bike and I rarely use it (apart when I’m on a road with Average Speed Camera’s) and I try not to use ACC on the cars I’ve driven: I always end up dawdling. So the thought of it on a motorbike seems a bit pointless. However, I suppose if you’re doing trans-continental trips (rather than a daily commute) then ACC must be a real benefit. Nevertheless, I give it a whirl whilst on the bigger more sweeping roads that we’re being lead on. I try increasing and decreasing the gaps with the handlebar mounted buttons even though the pack of test riders were travelling in a very conservative style. In fact even more restrained than I was anticipating.

All too soon, we’re back at the café. Unfortunately, there is no opportunity to do a back-to-back ride with a Super Adventure R with its non-adjusting suspension and bigger front wheel. This was one of my reasons for going. This is something that will elude me for 12 months despite of trying a number of local dealers. Sadly no opportunity for the 890 Adventure to redeem itself either. Oh well, perhaps another day.

Big question – Is it enough for me to part with my cash for the update?

Following my feedback to the event manager of the bike and the ride (over a traditional “light-salad” sandwich), I had a ponder on whether the new model was a significant step change over my current bike. In truth, it does ride a little better than mine whilst retaining the characteristics of the dominating engine. The handling may well be better but I’m not really good enough of a rider to tell. The conditions really didn’t give a chance to investigate that further either.

The ergonomics have definitely improved with the new switchgear. The introduction of the “preference” switch that allows you to select two features quickly is a real benefit, even though you can catch it with your glove accidentally. The tedious current process where you have to trawl through 3 screens to select a feature, such as the heated grips, is very long-winded.

However, it’s not such a leap in riding experience for the money, but you need to balance that against my current bike that has set a very high benchmark. I might have to stick with my awesome 18MY bike for the moment until something special comes up.