So what is a ‘Sports-Bike’ exactly?

In order to get your head around the concept behind the eagerly anticipated FTR1200 I think you must first understand what the term ‘Sports-Bike’ actually means: In its native USA it means something different to the European perception of the term. Sporting success in the US was originally forged on dirt tracks and cinder ovals. Not on twisting ‘road-racing’ circuits. These dirt tracks are more akin to Speedway in our terms.  Indian was a big player in those formative years in the early 20th century and it is again now. If you fast forward a few decades and check out the resurgent flat track racing scene in the USA, the FTR750 is really doing the business for Indian once more. 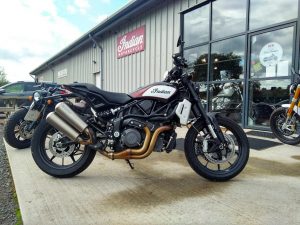 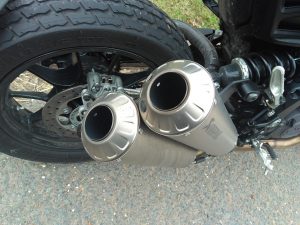 FTR is a good looking bike, the chunky tyres are different too. I rode the same bike twice. I preferred the look with the white inlay on the tank

So it is in that spirit that the FTR1200 road bike should be considered. Indian aim to capitalise both on that heritage and  on the current success of the track FTR750 in order to take on the likes of the Ducati Scrambler. Sales of bikes such as the Ducati are very buoyant at the moment. Indian what a piece of that action

Climb aboard the FTR, the Flat Track Racer, and the stance of the bike is very much more aggressive than the laid back Scout. Upright, wide bars combine with the foot-pegs that are just set back a little. The bike has a business like feel, as if it just wants to get out there and rip up some tarmac, or better still some gravel! The chunky tyres, that have a pattern new to me, are somewhere between knobblies and road tyres. They just add to the statement the bike is trying to make.

Enough talk: Time for the off and the first thing that stuck me was the seat height, the more traditional Indian position is low and laid back. The FTR actually is fairly high and as I am somewhat vertically challenged this surprised me a little. However nothing I can’t deal with. I quickly headed off along one of my favourite local roads that heads from Stourport over to the charming little town of Bromyard.

At home a twisting, country A road

This is the perfect road for the FTR to be put through its paces and I have to say it rose to the challenge. The 1200 engine shares layout and capacity with its mild mannered cousin the Scout. Here though it has been heavily reworked and now is a much meaner affair punching out 123 bhp.  However it is more the manner in which that punch is delivered that is significant here. The bike has real grunt and it really catapults you out of bends. They come thick and fast on this road and the FTR is a real hoot to ride in this environment. The bike’s brakes are great too and when combined with the well controlled handling the whole package delivers fun by the bucket load. I must admit I wasn’t sure about the tyres  when I first saw them, but there was no problems here! The bike I rode was fitted with snarling Akrapovic pipes too, which give a real menace to the engine note, but I think a little more work is needed to clean up the throttle response at town speeds when the bike is cold.  They look and sound great though. 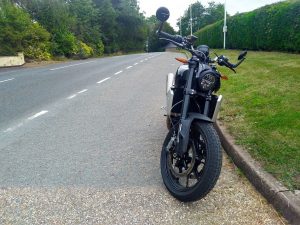 Reading and willing to kick you sideways on dirt track, but also rather good on a twisty English A road!

The FTR is a good looking bike too: The tank/seat unit integrates well and the dirt track stance has been honoured in the transformation to road bike. It really reminds me of the special Midwest Moto built for the bike show a few years ago, the MW115. There are couple of things that could do with a little work such as the number plate holder. The plinth looks like an old steel bridge and a neat shroud over the rad cap would be welcome. There was a carbon clad 1200S in the showroom when I picked up the demo bike and that looked great! 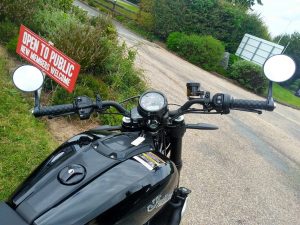 Business like clocks and there is a USB for the seemingly essential electronics gadgets we love to saddle ourselves with these days. Please develop a shroud for the rad cap Mr Indian

Performance is strong and while I didn’t push the bike to the max, I am no Jared Mees or Joe Kopp, point to point you can cover ground seriously quickly. The FTR is a very much an Indian, but in a totally different way the other bikes in the range. The Scout and Bobber honour one thread of the Indian story, the open road the great American dream of the highway stretching out before you into the distance. The FTR references that dirt track edge, that all that matter is the next race. The bike has attitude and that is kind of what it is all about. Is it a well suited to a European twisting road as traditional sports bike? Maybe not, but that isn’t the point. Is it a quick, capable, well built bike? Yes, the FTR is still very much the American icon: Put it this way; this bike remains a full fat hamburger, but with a healthy splash of Tabasco sauce!

Thanks to Midwest Moto for letting me try your demo , I would recommend you do the same