Well that was certainly different! Today I experienced what well may be the future of motorcycling…an electrically powered superbike. The Energica E90 is no tree hugging commuter bike, or green ‘alternative transport solution’. What it is first and foremost is a sports-bike that just happens to have a different means of being propelled. The manufacture have serious credentials too having worked with NASA for example. 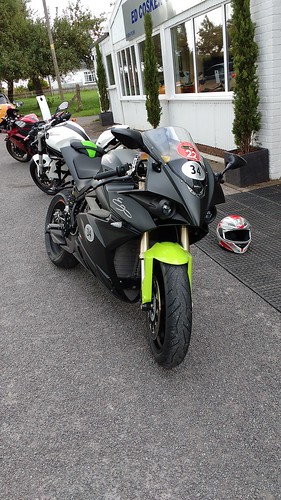 Compact and mean in black….The E90 is a good looking bike

Looks can be deceptive

When you first approach the E90 you are greeted with  a machine of classic sports bike size and proportions. The bike has a compact, muscular look, fully faired, with a typically sports bike couched riding position. It isn’t until you look closely you notice that tucked away in the figure hugging fairing is a substantial electric motor and battery pack. Then you walk around the bike and notice the lack of gear-lever and clutch lever: No need with this bike; you just have to twist and go, like you would on a humble moped. But this isn’t a moped, oh no. The first serious twist of the throttle (controller) swiftly dispels this motion. I rode the bike in sports mode. This reduces range to about 70 miles, but the performance is amazing. 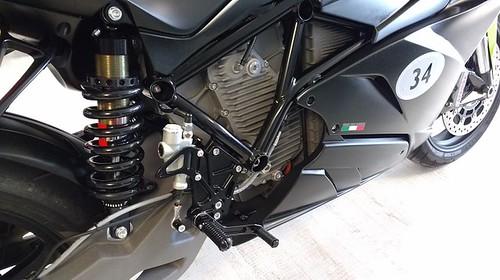 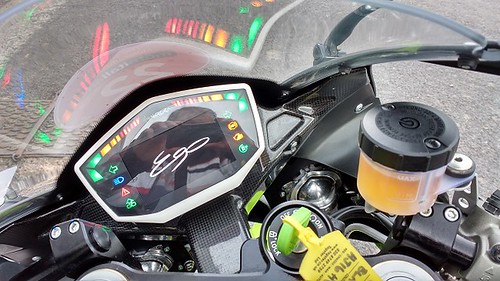 That neat dash pack: Yes I know you can see me reflected in the picture, I am not a pro photographer you know!

The first thing I noticed as I got on the bike is that despite that compact appearance, the E90 carries some weight. I found it was quite an effort to get the bike off the side-stand. The motor and battery pack account for much of this mass, and the E90 comes in at 280kg. This is some way north of conventional superbikes. However the bike is a  doddle to operate and once the stand is retracted the bike is ready to go on the turn of the key. The colour screen lights up and the word ‘GO’ pops up in green, very quaint. A twist of the throttle and out onto the bumpy Herefordshire lanes that were to be my playground for the next few miles. This bike was the Energica demo and it been used at some big events. It felt cool to be riding the very bike that has been up the hill at The Goodwood Festival of Speed. Not only that the Energica is made in the home town of Ferrari no less!

A New Way of Riding

The sensation and sound are totally unlike anything else that I have ever ridden. The bike emits a guttural wail as you accelerate and the ‘pick-up’ is pretty much instant. The E90 is seriously quick and the speed builds deceptively. You are robbed of  the usual reference points: There’s no screaming engine or going for gears here. The speed just builds and builds and builds. Luckily the E90 disguises the weight well in the corners and the braking effect when you shut off is pretty marked too. You can feel the weight, but the bike corners well and given time to get used to how the bike performs and how best to apply that performance. I am pretty sure it would be right at the pointy end of the sports bike class. I rode for about 20 miles and it put a smile on my face, surely that is job one for any bike?

I tried riding the bike at a variety of speeds too and took it through the local small town of Bromyard to see how the low speed response was. I have to say the bike was docile at low speed, I did wonder if the pick would be snatchy but it wasn’t. As for recharging the E90 has a neatly packaged twin charging port under the easily removed seat. One of them takes a connection identical that used on the Tesla Model S car. This allows for quick charging and using this hook up and the appropriate Tesla charging point, the bike can be ready for action in as little as 9 minutes

So we what have here is a foretaste of the future of motorcycling. Like it or not the internal combustion engine is on the wane and something will have to come and take over. I had feared that electric bikes would be dull, but when I first saw the TT zero bikes at the IoM in 2015 I began to have hope that biking would still be fun in the years to come. The Energica E90 confirmed that…it is not perfect. The engineering challenge will be to reduce weight, to increase range and battery life. The reduction in weight will boost performance still further and will also help improve the handling. Cost is a challenge too. The E90 costs £25,000 and that is a whole hill of cash. However you do get a £1500 kick back from the government and there are some innovative trade in deals being offered by the manufacturer when the time comes to replace the bike. Plus when you roll up to a bike meet you will be only one there on one these… 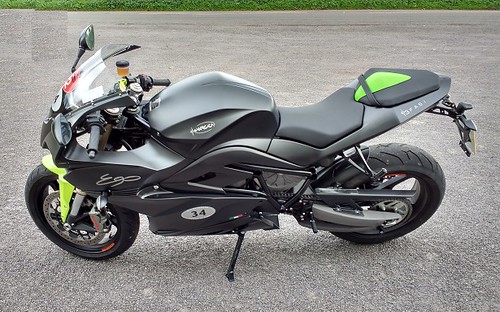 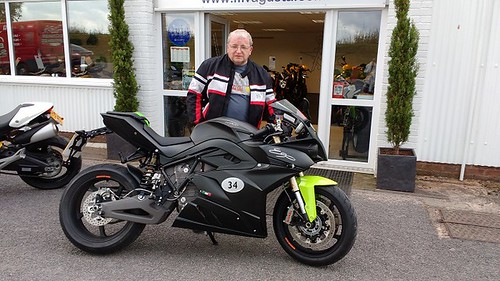 The Energica reminds me of the Tesla Model S: An electric car that has thrived by being a cool car, not just because of the way it is powered. That is a big compliment. This is a cracking bike and in the words of Bob Dylan, the times they are a changing! Or is that charging?