Our latest Real Rider Review covers a bike that I am really interested in: The Yamaha Niken. Typically Yamaha have gone a bit left field and been the first to apply the two front wheels concept to a ‘Super-bike’. Peter Wills is the lucky man who got to have a try of this fascinating machine:

Should Mr Skywalker ride a Niken?

The first time I saw the Yamah Niken in the flesh was at the NEC when they first came out (back in 2018).  With its futuristic looks, it was like something out of a science fiction film and I wanted one!

But I had my Rocket 3 and Tiger Sport and hadn’t had enough of either one at that time (there is a very limited space in my garage).  So I waited…….

Fast forward to two weeks ago when my wife and I were visiting friends in Bournemouth and I said “We just need to pop in to see Richard at Moor Valley Motorcycles.  I haven’t seen him for a couple of years”.  Walking into the bike shop, the first bike I saw on the right was a Niken!!  I was as excited as my wife is when she sees a Luis Vuitton handbag.  So after a brief chat with Richard I swung my leg over the beast.  Riding position was very relaxed and comfortable.  “Can I take it out?” I asked Richard. 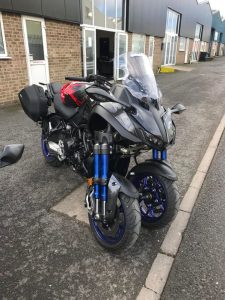 Three wheels on my wagon!

Last weekend I went back with my Tiger Sport and after the usual paperwork I got to take it out.  Riding out of the dealers and onto the road, I was very impressed by the normality of it.  It felt like a normal bike.  But it wasn’t until I got to the dual carriageway that I had a chance to give it the beans.

In the words of a certain J.Clarkson: More Power!!

I guess I shouldn’t have been too surprised at the lack of oomph as it was a heavy bike (260Kg) and only an 850cc engine.  It could really do with an upgrade to maybe a 1200 in my opinion, but of course, that would make it even heavier.

It had rained last night, so there were a few wet patches around.  Coming to my first roundabout (which was dry) I entered the roundabout at normal speed and the bike felt very stable.  The next roundabout I pushed a little harder – no problem at all.  The third roundabout (yes, there are a lot of roundabouts on this road) was damp but the bike felt very stable again.  A little too much throttle on the exit saw the back start to lose a little adhesion, but it all felt very controllable.  Coming to a long straight, I opened it up and at 60mph the wind noise was significant.  At 70+ it was deafening (a big minus).  I was later informed by Richard that this “standard” model has the touring screen, whereas the GT (there’s a GT??) has a shorter screen, which should be better.

Flickable, but a tad heavy?

Off the dual carriageway and onto some twisties, the handling was very sweet.  I could flick the bike through the bends with ease.  The sun was finally out and I was able to push it harder and harder.  Had a lot of lean angle with nothing grinding (I believe it’s advertised as having 45° lean angle, which is more than most people will use). 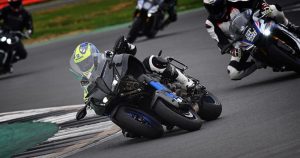 Not our author, but it shows the bike being pushed hard. A guy at his work goes on regular track days and there was one of these there a few months ago. He said nobody could touch it in the corners.

I turned off a side road and got off the bike.  I wanted to see how easy it is to manhandle.  When I get home, I ride up to my garage then have to turn the bike 180° and back it in (all on a slight incline).  So I wanted to simulate this but turning the bike around.  As I suspected, it was heavy.  I’d already sold the Rocket a year ago as it was starting to get too heavy to push around (I’m 65).  Hmmm… another negative.

Good, the Bad and The Ugly

So looking at the pros and cons, here are my conclusions (albeit after a short 45 minutes on the bike).

I got back to the dealers and decided it just wasn’t for me.  The weight and lack of power were the two big negatives for me.  Got on my trusty Triumph Tiger Sport to go home.  After the Niken, the Tiger Sport felt sooooo much more lively and fun.

Not sure what the future holds for the Niken, but it needs to go on a diet before I’d have one.

Interesting insight from someone who has also ridden this fascinating bike:

I have ridden quite a few Niken; Until April 2021 I worked at a Yamaha main dealer and even managed to get on the dealer launch! This took in the back roads all around Matlock, led by a  rider that runs focused event’s track days. We weren’t hanging around

I used to regularly take the demo up to the Norton bike night they used to have at Donington. The engineering is just clever geometry, nothing too technical, an extra hour labour at the 12k service for greasing the bearings is the only extra work involved.
Get on one . Anyone who says they are pointless or OK for disabled riders has obviously never ridden one , ignore potholes and odd gravel patches and just enjoy it .
Nigel Cartwright

Some other 3-wheeled options:

Yamaha Tricity – a trike, but not as we know it. Review and Pictures