Time for another one of our popular Real Rider Reviews. This one recounts the tale of very hard working Honda. A bit of an unsung hero of the biking world. Take it away Dan White:

The Simple Things in Life

In mid-2018 I changed jobs and got back into riding again after a few years commuting via train.  I chopped my Tuono in for a BMW K1200R Sport.  As almost any BMW owners know they don’t exactly have a reputation for reliability nor paint finish (to be fair this was my first BMW).  After doing a few minor maintenance tasks and cosmetic upgrades I decided it was too complex a machine for me to “practice” my DIY skills on.

I decided to look around for a bit of a project bike.  I was happy doing oil/coolant changes and rebuilding brakes but anything more complex scared me.  I was pretty much set on a budget of £1,500,minimum 250cc and it must have ABS. This, as you can imagine, narrowed the market.  One that kept coming up that met the requirements was the CBF500.

I found both a CB500 and a (much higher mileage) CBF500 online.  I’d asked for opinions as to which was best on ‘Reddit’ of all places.  Low and behold someone commented that they had a CBF and wanted rid of it before the imminent ULEZ came in.  We decided to meet, and the deal was done there and then for £540. Bonus: The Honda even had a (VERY short) MOT!  It was a 2006 model, black, with 67,000 miles, and pretty much standard apart from some Renthal bars and a Black Widow Can. 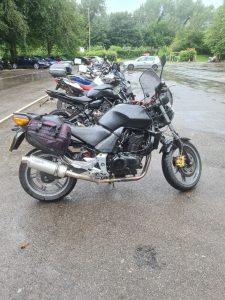 It might not be glamorous, but it is CHEAP!

First job was to make sure it passed its next MOT (10 days later). This meant a rebuild of the rear brake caliper due to a corroded piston.  Luckily it passed, albeit with a stern warning about the exhaust noise.  It had been a good 4 or 5 years by that point since I’d ridden anything less than about 120hp so this was a real learning curve.  Considering I felt like I was going to die every time I hit a corner on the way to the MOT station, I knew I’d need to upgrade the suspension!  I’ll add here that I’m about 6ft and 18stone so even on brand new stock springs I’d be pushing it…..

I duly brought a street upgrade kit from Hyperpro but then found out nobody would/could refurb the stock shock so only kept the new fork springs.  Then somehow I ended up getting a YSS Z series shock with a custom weighted spring (I didn’t realise Hagon did custom spring weight as standard and for less money) and an ABBA stand and took the forks and shock off.  Again, this was the first time I’d ever touched suspension – I’d never even thought of touching preload before. The stench from the fork oil was awful!  Without too much difficulty I got it all back together and went for a run.  The difference was startling, no longer did I fear imminent death at every corner!

Since then, I’ve changed the chain and sprockets, put on a Lextek exhaust with BSAU mark, rebuilt then replaced the carbs, hardwired a dash-cam, uprated headlight, auxiliary lights and socket, blacked out almost everything, Givvi rack, TRK Stainless front brake pistons, EBC disc, Titanium bleed and banjo bolts, new head bearings, Stebel Nuatilus airhorn and a new EBC clutch.  This may sound like a lot but it’s been my experiment as much as a project bike.

The ONLY thing to have failed has been the radiator fan switch.  The clutch had some life left in it but the new one has smoothed things out. The carbs were just worn, and a second-hand set was cheaper (£35) than rebuilding them fully.  This has allowed me to tackle similar jobs on much more complicated bikes.

I mainly used it for very short journeys or urban commutes to work and back.  Also, considering its low cost and weight I’ve even ventured out in Icy conditions (commuting) which I’d never have considered on a bigger bike.  When my several BMWs turned into absolutely hatefully, unreliable pigs I just ended up taking the CBF more and more instead. I just knew that it wouldn’t let me down and would always give a good account of itself.  In fact, apart from when I tried to start it on a freezing December morning with the new E10 fuel it’s NEVER had an issue starting nor broken-down.  It’s been to many a bike night and day trip.  I took it on a 500-mile weekend camping trip to Wales and back – 250 miles on the Saturday alone.  It’s been on IAM ride outs, ordinary social rides and everyone has been shocked by not only how it kept up but by it ticking over 71,000 miles without issue. 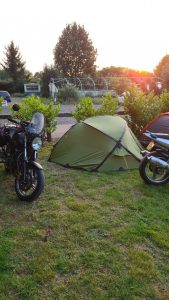 It’s a Tourer too!

You do have to bear in mind that this is at heart a budget commuter/first big bike.  As such the front brake isn’t particularly
brilliant and you have to use quite a lot of back brake to help it slow down.  Whilst it HAD 56hp I’d wager it’s lost a few (most likely due to poorly synced carbs) however it’s far from struggling.  It will happily cruise and overtake at shall we say, “Motorway Speeds” and has no problem leaving cars for dead.  The only real issue on any sustained high-speed cruising is the total lack of wind protection resulting in rider fatigue.  It is BRILLIANT on smaller B roads and urban environments.  It turning circle is very small and aided with the big wide Renthals it makes shoulder checks and very fast filtering an absolute dream.

Remember it is a Budget Bike

Due to the relatively relaxed nature of the steering angle and simple damper rod forks the front suspension isn’t the best.  It has a tendency to crash over high-speed bumps but never to the extent it feels dangerous.  I’ve had trouble finding linear rate springs in the correct size as well.  I’m looking at getting either some YSS PD valves or possibly (if they fit) a second-hand set of forks from a CBF1000 due to their Cartridge design.  Again, this isn’t a deal breaker, and the majority of people would be absolutely fine with it as standard but I’m always after a new project.

Considering it’s apparently spent its life commuting year-round around London the cosmetic condition isn’t terrible.  I decided to black out the Engine as it required less work than repainting and keeping the silver/grey clean.  I’m going to get the swinging arm powder coated due to quite a few stone chips and maybe the triple clamps due to key scratches.

I have auxiliary lights on the front mudguard, the hardwired dash-cam, USB charger socket and wiring for Gerbing heated gloves.  Not once can I remember needing to charge the battery nor does it give starting problems.

On the original carbs I was averaging around 32mpg.  From what investigating I could do it seemed either the diaphragm or elsewhere was worn.  My eBay special secondhand set worked wonders and it then returned around 65mpg ish – this has gone down to mid 50s since the Lextek has been fitted.  It used very little oil and certainly nothing to worry about.  As mentioned, the only other issue I had was around using E10 fuel.  It backfired terribly and wouldn’t idle with the choke off until I had ridden a few hundred yards.  A change back to E5 sorted this out although the E10 works fine in warmer weather.

You Know Where You are with a Honda

Overall, these are absolutely fantastic little bikes that will be more than enough for the majority of riders out there.  What you lose in the straights you can gain in the corners and the smaller roads.  You will have very little – if any – real reliability problems and insurance, running costs and maintenance will be minimal.  It’s impressed me SO much that I’m now a 100% Honda convert and have chopped my BMW in for a VRR1200F.