Recently I was at  a local bike shop and parked outside was a cool V twin bike. Styled somewhere between a 60’s dirt bike and a cafe racer. It looked so good I had to have a closer look…to my surprise it was a Lexmoto! It is a good looking machine and for me marks the breakout of the Chinese manufacturers from their 50 and 125cc beachhead.  A member of a local MCC has bought one and has been good enough to record his experiences with the Vendetta so far. Over to Craig…

Like many owner reviews I feel a bit of backstory will help, My main bike is a 2016 Kawasaki Vulcan-S but wanted something different for work in the winter a 4 year journey to find a 2nd bike was started. I’m a tall rider at 6’6” so what most riders might settle for just don’t work for me, bikes like VFR, GSX, Bandit or Himalayan simply don’t work for me so I have to look a little further a field. A GPZ305 had shown me small could work, an XT600 said tall was king, a KLX250 was great but worrying to leaving anywhere, a Skyteam125 had surprising quality; was there any middle ground to be found? Enter the Chinese Lexmoto Vendetta 250 with its knobbly wheels, wide bars, long seat and being highly unlikely to be on organised thieves hit list. 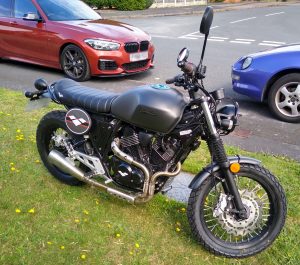 Purposeful and good looking, the Vendetta 250

I was worried about the high end of this when buying brand new in Sep 2020, I resisted the urge to take it out for a test and ran the engine in properly, during this the stock nylon Chinese tyres were not holding the corners at all; a pair of Metzeler Lasertec from MyTyres soon fixed that. The dealer who supplied the bike (Redline Motorcycles) fitted them for me. Once run in I have to say the bike’s performance is nothing short of puzzling because it is a fantastic ride and hard to believe it was the lowest bhp for new 250cc bikes in 2020.  The bike accelerates well through 1-4 but 5th is pretty much a petrol saving cruise mechanism, the front lifts (not popping) while accelerating through the gears but there is a 9k rev limit low end, makes sense for its target audience but I feel it could cope higher, after 1st change at 8k to gain high speeds quickly or keep around 3k throughout to glide around, either way the bike doesn’t sound troubled.

Round town I am cutting in and around traffic easily, onto the bypass and its still great at 60mph, cut to a situation where I’m on a 4 hour cross country ride and I’m heavy on the brakes to avoid catching the bigger bikes in corners. At higher speeds I’m not loosing much ground and the motorway is fine for a short hop.  When it comes to high speed performance the bike is alright up to 60mph, after that acceleration is gradual and overtaking needs planning above 50mph. As I said the fun really is in the corners and has made me rethink my whole bike setup (sigh, not again).

Everyone who has been out and about with it have been impressed, people like how it looks and those who have had a go had nothing but good things to say, there are mixed reactions to the seat however, I like the seat and have to say its more comfortable than the cruiser at sustained speed, its an unshaped flat seat but padded so not like a plank, might take a rider a few rides to grow into it.  There are bar vibrations but not enough to put you off a cheeky ride in the sun.

The build quality is acceptable for the price point. So far nothing is falling off after seven months on my commute when the bike is left outside. It is garaged overnight at home.  I have put 2500 miles on the clock and Redline Motorcycles (Birmingham) have been great with the couple of niggles that have come up.  An ABS sensor and Regulator have needed to be replaced, but it was  all covered by the 2 year warranty and so both were changed for free.  There are signs of rust on bolts and minor fixings so I plan on doing a strip, replacing, copper slipping and re-coat connecting parts. These issues  do not seem to be hitting more major parts such the chain, brakes, levers and foot-pegs. The exhaust is stainless so no worries there.  Considering I paid £3,000 ride away with 2 years warranty I feel the quality is fair, but I do think dealers should have a tyre switch-out option available at purchase because it’s dangerous putting Chinese cheap tyres on bikes intended for newer riders.  Initially I thought the back break felt a little spongy but I have had to do plenty of emergency stops (use your damn eyes people!) and they have not made me consider changing them, the stock setup is staying. 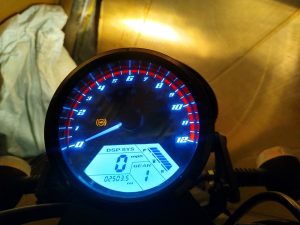 Neat and well laid out…better set up than than my Ducati Scrambler!

I have to mention economy, I don’t count mpg (specs say 88) but a full tank of supreme costs just under £13 which will last around 130 miles while riding the daily grind, by the time I need petrol I usually cant remember the last time I filled up, It’s great! I have not taken this bike off road, I don’t intend to either, it’s a stylised road bike; my replacement tyres are wet focused road tyres.

If someone was to ask me if they should buy one, the answer is dependant on their situation.  As a permanent A2 main bike you can get a big brand used bike for the money which will hold more value,. If you must buy new I would say save £6k to £7k and get one of the big name brands, if your adamant for new and £3K is all you can stretch to then you have little other choice above 125cc but you will like your new bike once some real tyres are fitted.  As an alternative to a rat bike for winter, a casual pop out for the afternoon bike or simply just a lighter option this bike will put a great big smile on your face and will make a relatively small dent on your wallet and garage space: If for some reason your left with this as the only choice on a ride out day or charity event you will be fine, just let the R1’s do their thing and you enjoy yours but I wouldn’t suggest this footprint for 2 up or carrying a load of camping gear.  At this moment in time I can say I do not regret my purchase as the only thing I want to change is the giant Lexmoto sticker on the side, I have made much worse purchases on the way to find this bike that’s for sure.

It seems that Craig is not the only owner who rates his Vandetta:

As my 2021 250cc Chinese Lexmoto is now 4 months old, it has now depreciated into Unloved and worthless territory (probably now worth under £2000) so I thought I would report on its performance thus far

. I have covered over 2000 miles in that time and whilst I know that’s still very low mileage there have been no problems at all. 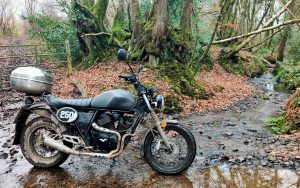 On the last check it was doing 95mpg, the lowest has been 88mpg, I have done several journeys of well over 100 miles, because it was inexpensive I use it in all weathers, covered in ACF50 and so far as I can see there is no corrosion at all but that will be confirmed when I give it its first clean in April

. Apparently it tops out at about 80mph but I have never been over 70mph nor do I need to, I dont use it on motorways although you probably could. I will go as far as to say that thus far its probably the most useful and best value bike I have owned, its also lightweight at 151kg. I will shortly be getting another (more expensive) Chinese bike as this won me over, but that will be well out of Unloved and Worthless territory