If you want a quick bike with a great racing heritage why not opt for the bike that just gets down to business of being quick and capable without the need to shout it from the roof tops….I give you the 2004 Honda VFR800.

If a V4 Honda was good enough for a certain member of the Dunlop family I suspect it will be good enough for you. Our resident bargain Honda fan, Paul France, discovered recently that a slice of the action is available for as little as £2500 these days. Read on to see how he got along with his example of perhaps the best all round mid-range bike of the last twenty years. Has the spark faded since 2004 when his example first took to the tarmac?

The VFR800 is a great looking bike, especially when finished in the Italian red with a matching pillion seat cowl and with a cool smoked black double bubble screen finishing it all off nicely. The combination lent it an aggressive sports bike look. My example hailed from from 2004, but even by today’s standards this bike looked modern. Personally I’m a big fan of under seat exhaust systems. I think the standard stainless end cans looked great, even if they were a bit quiet and lacking in character. 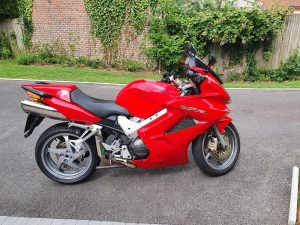 A characterful V4 but where’s the thrill?

Speaking of character, where this bike really had any was in Honda’s renowned VTEC V4 engine. Nestled neatly in the beam frame at 6800rpm you really notice it kick in hard. This gives a distinctive gurgle and sudden surge of energy. That is it though I’m afraid, and about as exciting as this bike got, at least for me anyway. If, like me, you’re used to riding 1 litre bikes and upwards where power is usually more than you’ll ever need anyway, you might find the VFR800 leaving you wanting a bit more.

Handling is not the strongest point

The handling on my VFR wasn’t particularly confidence inspiring. It doesn’t do too badly on most twisty roads, but I found when I wanted to push it harder it wasn’t giving me the feedback I was looking for. In addition it didn’t take much before the pegs grounded out. I did put some Bridgestone BT023’s on which I swear by on all my sport touring bikes. I must say they did suit the bike well. Perhaps if I gave it more of a chance I could have gained more confidence on it, but I just didn’t connect with it in the way I have done with others.

In terms of comfort, my bike was fitted with bar risers which gave a pretty decent riding position for long distances. My only complaint is the standard seat gave me a numb bum after 2 hours of A roads/motorways,. This isn’t bad going. However I’d recommend upgrading if you can. If you’re a taller rider (I’m 6ft) the MRA touring screen is a must. I certainly noticed the difference when I replaced it with the sporty double bubble.

Other things to note, I wish the bike had a gear indicator. I found it hard to get to grips with what gear I was in at times. The throttle I found to be a bit ‘snatchy’ low down. A remap of the fuel injection would have been on the list if I decided to keep the bike. This isn’t too expensive with a power commander add-on so I believe.

To finish off, I think the bike is perfect for mid-range touring/commuting. However it could be good for even longer distances with a more comfortable seat and of course luggage add-ons. Otherwise it’s also relatively good for the more reserved Sunday scratcher. It could be better or more ‘hard-core’ if the suspension is upgraded perhaps?

But, of course, the best thing about this bike is that it really is a nice looking machine which definitely turns a few heads. It seems however that the racing heritage is well hidden…

Review and road test by Paul France for BikeMeet – all image and content rights reserved. If you’d like to publish a motorcycle or bike accessory review on here, get in touch via the contact page.