About a year ago I tried the 125 Caballero and whilst it is an impressive machine being well built, good looking and very capable it was clear that the cycle parts could easily cope with more power. The 125 while suitable for learners was not really up to exploiting the full capability of the frame and cycle parts 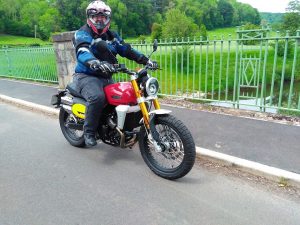 Well now the clever people at Fantic have shoved in a 43 bhp 500cc single into what looks like essentially the same frame and cycle parts. The UK based consultancy Ricardo designed the engine apparently and they have a pedigree that includes working on engines for the like of McLaren for use in their epic road cars! A few changes were apparent, for example the lower engine mounts look different and I think that there is some additional bracing on the frame to allow for the increase and power and weight. Speaking of which the weight of the Caballero is up by 20kgs when compared to the 125. However it still only 145kg overall, which is pretty light, especially in modern biking terms. The new engine looks perfectly at home in there and I was delighted to be offered the opportunity to ride a demonstrator last week. 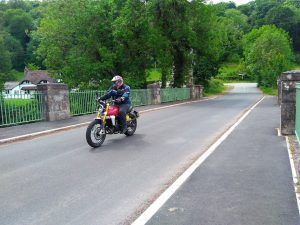 Well what a cracking piece of kit: Now that it has the balls to match its brawn the Fantic hacked across the Worcestershire A and B roads around the hills surrounding the famous Shelsley Walsh Hill Climb circuit with real aplomb. I was taking it easy as the motor still had less than one hundred miles on it, but even so the bike is now transformed. I can imagine the Caballero would be great fun for an experienced rider. The rural roads I tried the Caballero on matched it’s character perfectly and the suspension felt taut and controlled and the brakes powerful. It was fun to hustle along and the extra grunt really transformed the whole experience. I didn’t try it on any unmade roads or green lanes but I would expect it would be a hoot. The 500cc single is muscular in its power delivery and would be ideal in these conditions. The extra power has only meant a small increase in weight, but eh jump in performance is considerable. Off road this would be much better than so many of the larger retro scramblers from the likes of Ducati and Triumph. Whilst both of these rivals are more powerful, with their much larger twin cylinder engines they also have to lug around much more weight.

So what we have here is a good looking, light and relatively simple fun bike, which at £6399 is significantly cheaper than the likes of the offerings from Triumph and Ducati. I think the engine has still more to offer too, and an aftermarket exhaust would liberate it from some of the emissions restrictions all bikes are hampered with now. Mind you it would be a shame to junk that lovely looking stock exhaust.

My advice is going a check out the new Fantic, try one if you can….I really think you will be impressed based on my brief ride

Update: Interesting feedback from a David Smith of the Italian Motorcycles Group on FB:

“A very fair review. I would like to say that its a bike that needs to be ridden, it needs you to take take control but is amazing fun to ride. The revs need to be kept within a fairly narrow band to make the most of the engines characteristics and let it rev too low at your peril. Handling is amazing even on road with its chunky tyres. I love my 50th anniversary edition and find other bikers are always coming to ask me about it whenever i pull up at coffee stops. For what it cost it is simply amazing”

125 Review for those of you still on L plates: Is in the Italian section ere

Thanks to these guys for the loan of the demo bike: