Another review from my friend Paul Beasley; This time it’s his own KTM…a 990 SMT. He struggled to come to terms with his new machine at first after the thick end of two decades of  four cylinder smooth Yamaha Thundercat ownership….have a read and see how he come to grips with the Austrian temptress…

I have a complicated relationship with this bike, which started with lust and has developed through doubt, frustration and mistrust to satisfaction and the beginnings of some passion.

It started a long time ago – I was in a long-term relationship with my ex, a Yamaha YZF600R Thundercat.  I knew that bike inside out and enjoyed riding it but started getting itchy feet and a wandering eye.  I considered a few replacements – Aprilia Falco, Ducati ST2, Yamaha FZS 1000 Fazer but these were all just window shopping, I always went back to the Thundercat which was as reliable as the sunrise and kept me satisfied.

During one of my weaker moments I found myself considering the KTM 990 SM-T.  I liked how it looked and the more I read about it the more it impressed me with its alleged mix of performance and practicality.  I started idly looking at what was available and how much for until one came up that captivated me.  A very low mileage example at a nearby KTM dealer; it wasn’t cheap but it was spotless.  Before I knew it I was at the dealer and doing a deal to PX my faithful companion for this temptress. 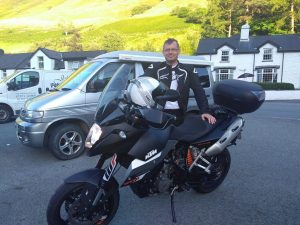 As I rode away from the dealer on my new bike I almost immediately experienced buyer’s regret.  I had ridden in on a smooth, carb-fed, inline-4 that I had been riding for 17 years and knew every detail of.  I knew how it responded to inputs, the brakes, the chassis, the engine – I knew which gear to be in and when and I knew it would get me wherever I was going – it always had.  Now I was on this snarling, shaking beast that was all wrong.  What gear should I be in?  Is the engine supposed to sound like that?  Why is it so narrow?  HOLY COW why is it so fast?  WHAT HAVE I DONE?!

The deed was done though, I’d made my bed and now I had to sleep in it – this was my new partner so I set about recalibrating myself to make this work.  Fast forward two years and I am sitting writing this having worked through some difficult times to reach a level of stability and contentment.

First of all – what difficult times?  Having previously owned a bike for 17 years that had only had one problem – a failed spark plug cap – in all that time the KTM has been somewhat less reliable.  First of all the front brakes were juddering – it turns out they are known for this and a quick inspection with a dial gauge confirmed both discs were warped.  I tried to straighten them and did OK with one side, but the other was too far gone so I splashed out on a pair of EBC discs and fitted them myself.  This was immediately better and made the ride far more pleasurable – problem solved.

Then the rear brake pedal went long requiring a master cylinder rebuild – I found the official Brembo kit and rebuilt it – problem solved.

Next, a warning light flashed on the dashboard – the FI light was blinking a code which turned out to be a MAP sensor failure on the rear cylinder.  Luckily it was the rear one because this was easy to get at and replace, which I did – problem solved.

Then it started bogging down and eventually stalling after around an hour’s riding.  I eventually traced this to a blocked fuel filter – replacing this requires the removal and refurbishment of the in-tank fuel pump, which I duly did – problem solved. 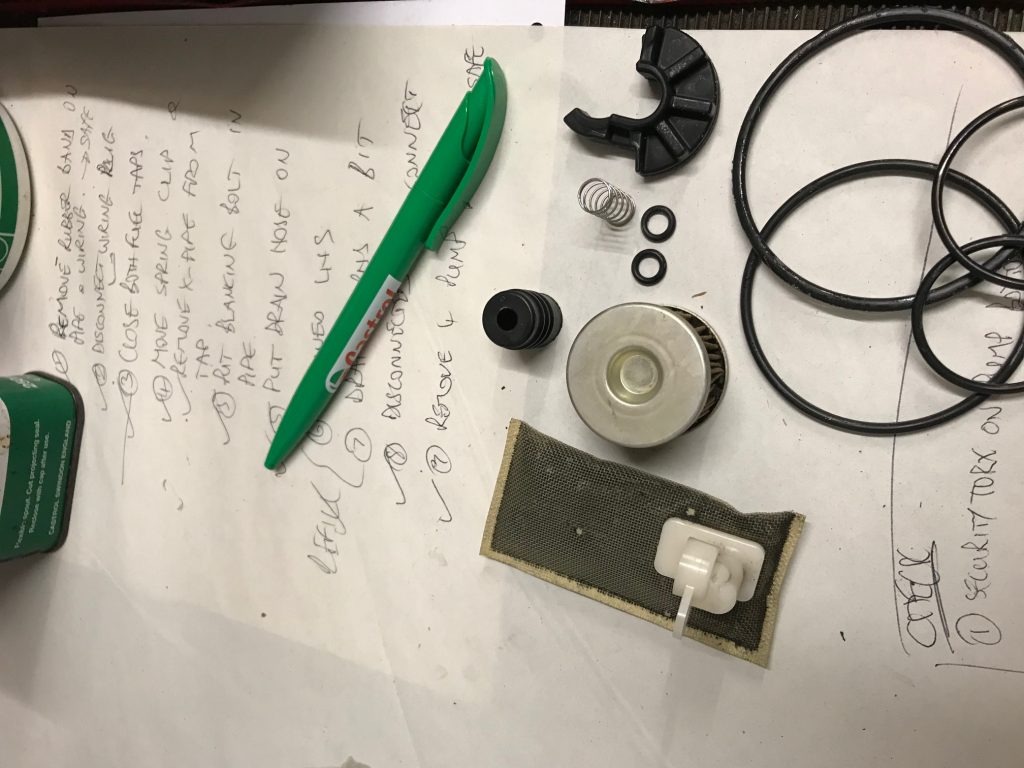 More bits than I saw in 17 years with my Thundercat!

As I write this the bike is mostly in good form… mostly.  One of the digits on the LCD speedo flickers sometimes, another known issue with this instrument panel caused by plastic parts inside fretting and generating plastic dust, which gets into the push-fit connectors between the LCD panel and the circuit board – I haven’t yet had a chance to sort this out, but it’s yet another issue that makes me question the bike.  That said, it has always got me to my destination, even though it has sometimes stopped along the way.

OK, so if it’s so bad why do I still have it?  Because when it is working and I have dialled into it it is great fun.  The engine is grumbly and vibrates at low revs but it still pulls like a train and keeps on pulling.  It red lines at 9,500 rpm but you don’t really need all of it because the torque curve is so flat.  I know this because one thing I have had done is a remap at BSD Performance – experts in the LC8 engine – to smooth out the on-off throttle response and generally optimise the mapping.

It’s an evolution of the 990 Supermoto, something of a hooligan bike and the simple addition of a ‘T’ (for ‘touring’) hasn’t really hidden that.  It gains a bigger tank, ‘touring’ seat, pannier mounts and small fairing/screen but retains the 999cc V-twin – good for 116 bhp and 72 lb-ft – as well as multi-adjustable WP suspension, Brembo brakes and Marchesini wheels at both ends.  Mine has had KTM heated grips and a KTM (Shad) topbox fitted and I have fitted KTM auxiliary LED lights.  It also came with an updated, later model seat with a more grippy surface and orange stitching.  Don’t even think about a KTM if you don’t like orange.