Recently I have seen quite a few lists on various internet groups and websites of bikes that people have owned over the years. It is interesting when put down in an entertaining way, helping to build a picture of person and their life experiences. Of course, I have list of my own, engineers often love a list. You can see how I have progressed from a humble 100cc Honda on to rather more potent machines. It tracks your progress in life too and how your finances have ebbed and flowed, with relationships, houses, jobs, kids and all the other stuff that life throws at all of us over time influencing your biking choices. Doing well? Lovely new sports bike. Having a tough time? Fixing a knackered 600 Diversion in the pouring rain on the way back from another miserable shift.

But what I have not seen so much of are the tales of the ones that got away. I do not mean the bikes we have idly pondered over on some auction website of another. That would run to literally hundreds of bikes for most of us! No what I really mean are the bikes have always longed for and wanted, but for a variety of reasons have eluded you…money, timing even divorce! That sort of thing. Bikes you have never owned but always wanted to.

For me amongst the myriad of bikes I have lusted after but never owned, three stand out: First up is the Yamaha RD500LC. After passing my test in 1984 and buying a RD250LC before quickly (literally) progressing to a RD350YPVS it was the RD500LC that was ‘The Daddy’. I wanted one so much it almost physically hurt! After a ridiculously enjoyable 2-3 years on my LCs the RD500 was the natural end game. The amount of attention and notoriety the V4 stroker got in the press just meant that I wanted one even more. There was an iconic image on the front cover of ‘BIKE’ magazine with RD500 pilot flicking the ‘V’s’ at one of the plod on a R80 with the by-line ‘How do you expect me to catch them on this???’ 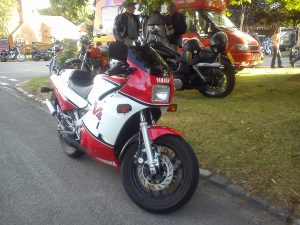 I can almost hear the exhausts crackling…

One lad I knew had one with the super rare red and black paintjob fitted with four expansion pipes that emitted an almost malevolent and evil guttural wail. Man, I was SO jealous! But the reality of apprentice wages soon tipped a bucket of stone-cold water of that burning passion. Redundancy finished the job off nicely! Do not worry I soon got myself back into a decent job, then bought a house, so sensible. Not only did I not get a 500 I had to sell my 350 as well and wound up riding an elderly and rather worthy Suzuki GS550. The moment had passed, the desire to own the 500 remains but they are moving target financially: Every time I think I could be in a position to afford one the prices take another leap away from my longing grasp. I saw an example advertised for £22k the other day! I console myself by saying they weren’t all they were cracked up to be, but deep down I still really want one. One day, one day….

Still ‘King of the Hill’ for me…

Next up: The Yamaha R1, but the one you might think. I know the whole world is going mad for the launch model 4XV in red and white and paying a bazillion pounds to turn them back to stock, but the R1 I have always lusted after is the 2002/3 model in silver and black with the cool slim LED rear light. This time I even got as far buying myself the official Yamaha jacket with ‘R1’ proudly emblazoned on the back. I lost count of how many times I was going to trade my current mount (a YZF600R Thundercat) in for one. But somehow it just never happened. Trying 2006 and 2011 examples only served to feed my desire for my own R1 but as the years passed my waistline expanded from the effects of one too many ‘light salads’ and as a result sports bike were not for me anymore. I wound up buying a FZ1S, a sort of sports-bike for old fat blokes as one of my lovely mates so delicately put it. Many more years have passed and desire for my own R1 in silver and black remains, but so does my belly! One, one day… 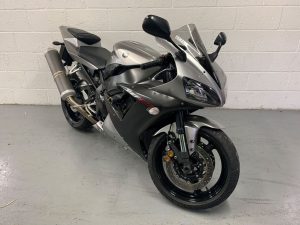 One day, my love…One day

Last, but not least in my list of out of reach loves, a Moto Guzzi, any Moto Guzzi really. I have always thought of them as cool bikes for proper hard core Italianate bikers. Why a Guzzi? Well because despite the fact they are not technically all that brilliant on paper; they are slow heavy things to muscle about on,  they just have a certain something. Many years ago, I shared office space with a French or Belgian guy who was cool personified. He rode a care-worn Le-mans Guzzi in all weathers and would arrive in the bike park outside the office peel off his one-piece riding gear to reveal a bafflingly immaculate suit underneath. He would then fire up a Gauloises cigarette and head off to start work, practically leaving frost in his wake he was so cool.

Inspired by this vision of steely assured style I booked test rides on a variety of Guzzis in the rather nieve hope I could similar levels of panache nearing by riding a lump of Italian engineering. First was a V65 Lario and then a Lemans V. Both rides confirmed that I just wanted one. That agricultural, gutsy V twin combined with an industrial feel to just get you going and want to ride and ride. Fast forward a couple of decades and somehow a Guzzi is still yet to grace my garage. Even test rides on more recent models have left me smitten despite gradual development soothing off some of the rougher edges over the years.  I particularly liked a V7 Special, but the Guzzi remains of my dreams remains elusive. One day one…. 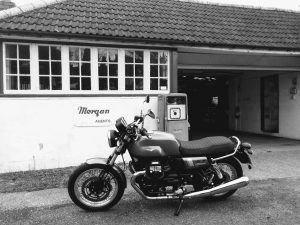 So what are bikes your ‘ones that got away’?